Ovenbirds are churning out cakes by the baker’s dozen 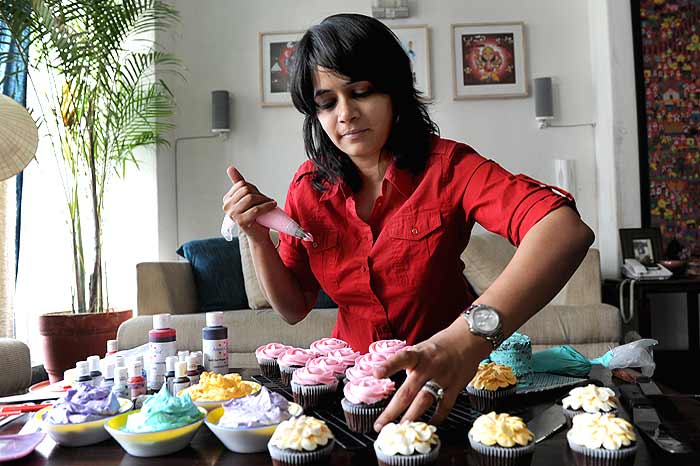 A year ago, Bayiravi Mani’s friends and family would have had trouble imagining her getting her hands dirty in the kitchen—and least of all by glossing up cakes. “I do not have a sweet tooth and I have always been more into sports than anything to do with cooking,” says the 29-year-old former event manager. Then she discovered the joys of baking, mostly via the internet, and a nom de plume was born. Bayiravi became ‘Bee the Baker’. The once-reluctant cook juggled crazy workhours with cake orders till she quit her job late last year to turn her undivided attention to oven delights. Now, her days are more like the sunny April afternoon we find her sprawled across her living room in Gurgaon, patiently frosting a batch of cupcakes with colourful butter cream flower patterns, an order for a wedding sangeet. Her clients swear by her filter coffee and mojito cupcakes. “It amazes me how something good can come out just by combining flour, eggs and sugar. It’s so easy. If I can bake, anyone can,” she says.

It’s a thought that provides common inspiration for corporate professionals, homemakers, children and even their grandparents. An eclectic variety of baking classes, specialised stores and a market for nifty cakes and scones are bridging the gap for a new generation of cityfolk who have caught the baking bug. Like self-taught baker Anuradha Sharma, who works in the television industry by day and blogs (at bakerstreet.tv), tweets and works her oven in between. “Baking is my space, a total stress-buster,” says the 29-year-old Mumbaikar who can whip up a mean cookies-’n-cream cheesecake (the actual baked one and not the frozen version, she clarifies), and loves holding bake sales for a cause. “There is so much curiosity about it on the web and it’s my interactions online about baking which keep me motivated,” says Sharma, who shares a recipe every week on her blog, calling it Muffin Monday, “to power through the day”. 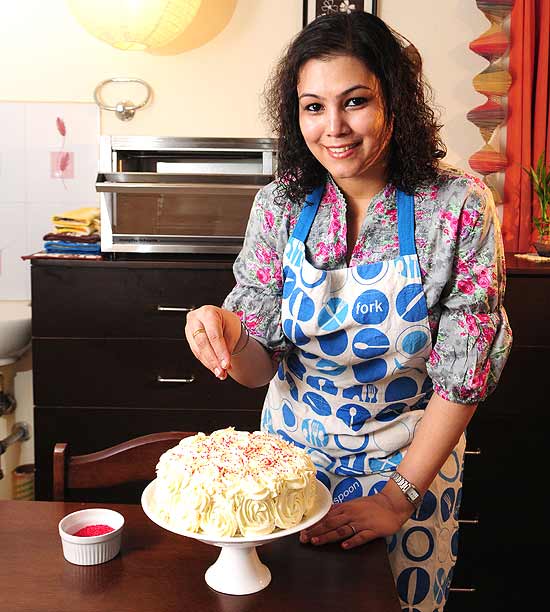 It really is that easy, and all baking requires is a wee bit of patience, feels architect Madhuri Kumar, who runs Sweet Somethings from her Bangalore home and says that just measuring the ingredients right is half the battle won. “It only gets better from there on. Plus, procuring ingredients today is not hard at all,” says the 31-year-old chocoholic whose baking workshops, called ‘Bakenomics’, are well-attended both by men and women. But more than anything else, it’s the feelgood factor that it exudes that has scores of people buzzing about baking. For bakers, as well as foodies. “Every second person I meet is baking,” says Bayiravi, who also makes special cakes and cookies for dogs and hopes to open a cafe# someday. “Baking is easy for amateurs to pick up, it’s easier than cooking,” she feels. Chaitanya Natesan, a 15-year-old Delhi student who often bakes on the sly even on school nights when he is supposed to be in bed, loves it because “it makes me feel really good about myself, to be able to create something so delicious from scratch.” For others like Monika Manchanda, it’s a trip down memory lane. A software engineer in Bangalore, Monika grew up on her mother’s pineapple upside-down and tutti-frutti cake. But given changing tastes, Monika specialises in spiked cupcakes, breads and cinnamon rolls. Like other bakers who bake out of home, most of her business happens through Twitter, Facebook and her blog (sinamontales.wordpress.com).

Getting messy in the kitchen is a great creative outlet for people to get their minds off work, feels Madhuri Kumar. Try catching Kochi-based Rumana Jaseel, of Cake Bake, on a weekday. It’s a good bet that you will find her busy in a baking class, which she conducts both in Bangalore and Kochi. “Baking does not feel alien to us anymore,” observes the nutritionist and self-taught baker, who makes only customised cakes on order. “Who’d heard of fondue parties before? But now they’re all the rage,” says veteran Calcutta baker Chandra Alim. It’s just this kind of specialised demand that motivated actor Sarah-Jane Dias and amateur baker Shaana Gwynne to open Butterfly—The Cupcake Shop in Mumbai. Given the cupcake frenzy, they experiment with logo cupcakes, in flavours like tiramisu and raspberry cheesecake. 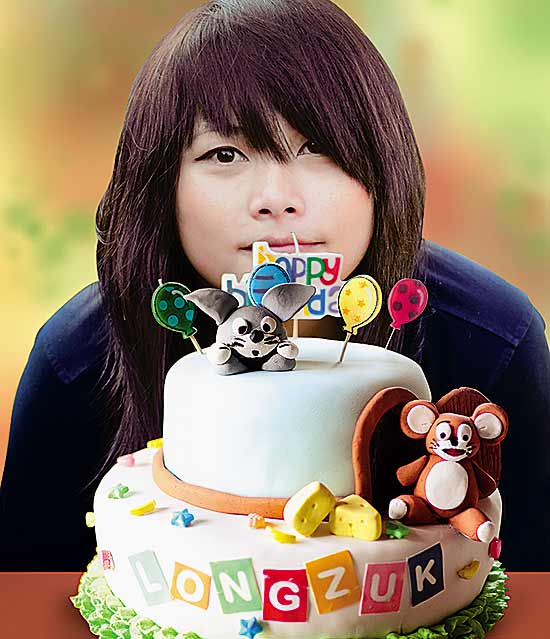 Yes, we have long moved on from the drab days of conformist choco truffle birthday cakes and ‘plain Jane’ vanilla muffins. We’re talking blueberry gateau, spiked red velvet cupcake, chocolate torta, French almond macaroons, rosemary chocolate chip bread and lavender shortbread cookies. All this for well-travelled, sweet-toothed souls, who are much more attuned to the latest from the culinary world than ever before. In Dimapur, Nagaland, they turn to Iliangna Haralu at I.bake, who, in her wee 20s, manages exotic, multi-layered cakes with a veteran’s flourish. And all dished out at home. A pastry course in the UK got Iliangna a solid grounding in the basics, but it’s the response at home that’s really got her catering business going. “I get orders from across Nagaland and even neighbouring states. At the moment, the craze is customised theme cakes: Ben10, Princess and Chota Bheem are the most sought-after,” says Iliangna. 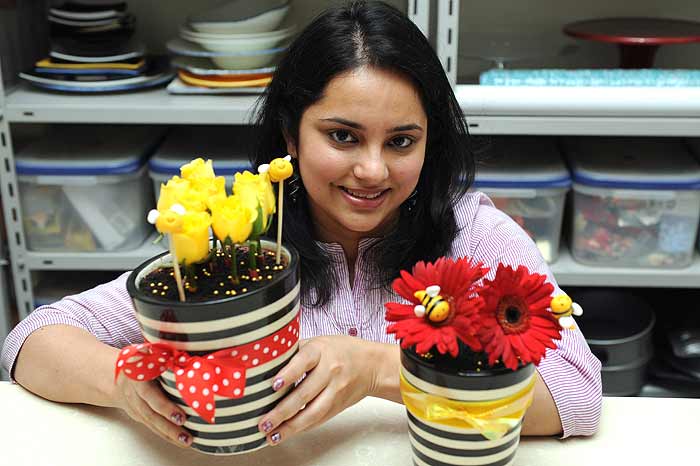 Delhi-based Kishi Arora, who runs Foodaholics, knows all about giving her customers exactly what they want—she has baked pies for picky clients with eight different flavours, one for each piece. She has also packed off cakes in ice boxes to Hyderabad, Goa, Ludhiana. “People know me for my personalised desserts. No two desserts will ever look the same,” says this pastry expert, armed with a degree from a top American culinary school, who bakes from home and often has to manage an order of 30 cakes a day. “A customer wanted lavender, orange, vanilla together in a cake, which is really an awful combination, but I did it. I made a vanilla cake with a tint of lavender, orange mascarpone with a fondant lavender cover, decorated with orange chips and white vanilla flowers.” Like Iliangna, Kishi tries to keep up with new trends in the baking industry. Home-based, boutique-style bakers who go the extra mile to see to it that their customers can have their cake and eat it too. That, really, is the icing on the cake.

Method: Pre-heat oven to 180 degree celsius. Grease two 9-inch round cake pans and line with parchment paper. In a mixing bowl, sift together flour, salt and cocoa powder. Set this aside. Beat butter until soft. Add the sugar and eggs—one at a time. Add vanilla extract. In a bowl, whisk the buttermilk with red food colouring. Alternately, add the flour mixture and buttermilk to the butter mixture. In another bowl, mix vinegar and baking soda. Allow the mixture to fizz and then fold into the cake batter. Divide the batter evenly between the two prepared pans. Bake in the pre-heated oven for 25-30 minutes.

Method: Keep creaming the butter until smooth and shiny, with vanilla extract. Add in the sugar while mixing. Add milk and beat till the frosting is fluffy. Place one cake layer on a plate. Add on a layer of buttercream frosting and place the second layer over it. Frost the top and sides of the cake.