Travelling With The Prima Donna

India is content with US statements about Pakistan and China. But the road ahead is nothing if not uncertain. 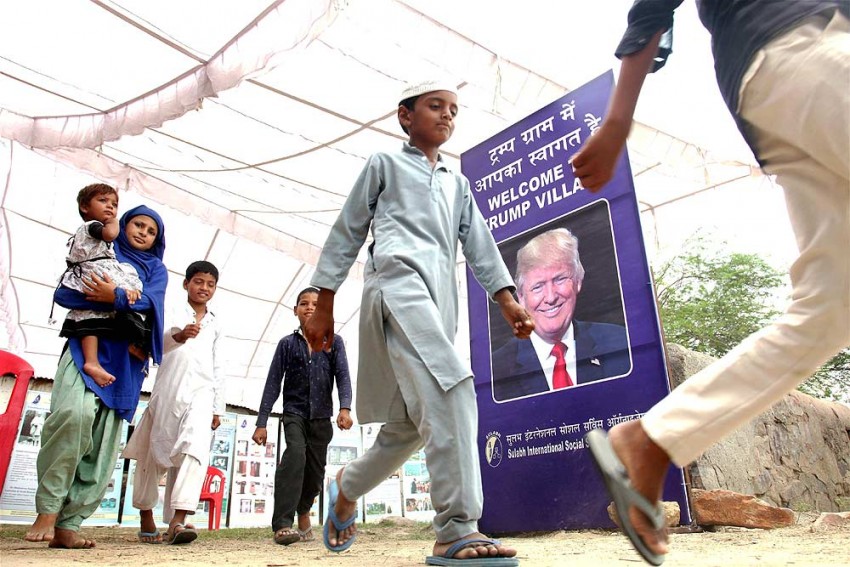 Villagers at Marora in Haryana, which was renamed ‘Trump village’
Photograph by PTI
Pranay Sharma June 30, 2017 00:00 IST Travelling With The Prima Donna 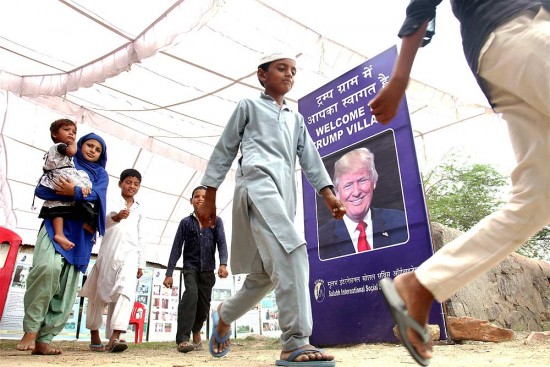 The ingenuity shown by some to rechristen a nondescript Haryana village after Donald Trump on the eve of Prime Minister Nar­en­­­dra Modi’s meeting with the American President did not go far. Despite media coverage, Marora did not change to ‘Trump village’. Attempts by activists to raise funds to build toilets there have also come a cropper. Authorities have asked them to remove all banners of the US President and move on, as Marora has already been declared an ‘Open Defecation Free’ village.

This interesting episode would perhaps figure as a tiny sidebar on the larger story that evolved in Washington DC on Monday, after the closely watched Modi-Trump meeting. Its likely implications had already been drawing expert comments throughout South Asia, but how solemn points in the statement play out in the cut-and-thrust of the real world of foreign policy and action thereon is a matter of speculation still.

In terms of optics and as far as crossing the first hurdle goes, Trump and Modi’s first face-to-face meeting went off very well. The Indian establishment and the large, steadily burgeoning band of pro-American supporters in India are crowing over the outcome. However, a sceptic commented, “We must have kept the bar really low to be so happy when many important issues from India’s point of view were hardly mentioned.”

There would be some truth in it, as from India’s point of view, the priority was a basic one—to assess how committed Trump was in pursuing the policy of building strong relations that had been put in place by his predecessors Clinton, Bush and Obama. After Monday’s meeting, South Block feels optimistic that bil­ateral ties were not only on track, but were likely to move at an even faster pace under the new American dispensation.

“I am cautiously optimistic after the first meeting between the two leaders,” says strategic affairs commentator Commodore (retd) C. Uday Bhaskar. His caution stems from Trump’s fickle nature and the fact that he can easily do a volte face on a leader and a country if something disappoints him. He has already done it with a number of countries—both close allies of the US like Germany or Australia or with China and Russia, countries with which he wanted to do business. Within just six months, his quick mood swings have intr­oduced an element of uncertainty among countries across the world.

The fact that no contentious issues—like a drastic reduction of H-1B visas that affects Indian IT firms; the divergent views of the two sides on trade, with India actively seeking an open global trading system and the Trump administration going for protectionist measures; climate change, where India is committed to the Paris Agreement while Trump decided to withdraw from the pact, or the how the two sides marry the ‘America First’ and “Make in India” policies—were cited in the joint statement is also a major worry for commentators like Bhaskar.

While cooperation in trade, energy and investment are important, most Indian observers have weighed in the significance of Trump’s comments on China and Pakistan. Traditionally, India’s policy towards its two neighbours has been dete­rmined to a large extent on the stand taken by America on China and Pakistan.

The NDA-1 government of Atal Behari Vajpayee used the upswing in its ties with the US in the wake of the 1998 nuc­lear tests quite effectively in dealing with both China and Pakistan. The question before many observers, therefore, is how effectively Modi will be able to play the US card in doing the same.

Trump has been most categorical in sup­porting India’s position in dealing with militancy in Kashmir, naming Pak­is­tan for its support to terror groups operating from its soil against India and urging it to bring the perpetrators of the Pat­ha­nkot and Mumbai terror attacks to justice. The American decision of declaring Syed Salahuddin of the Hizb-ul-Mujahideen a specially designated global terrorist seems to have delivered a body blow to Kashmiri separatists and Pakistan. Many of them were hoping that Washington will come down heavily on New Delhi for its tough dealing with stone-pelters and the pro-Azadi sections in the Valley. But the Trump administration seems to have gone along with India, endorsing its stand on Kashmir by remaining silent on issues of alleged human rights violations.

On China, the remarks of the US were oblique, though, significantly, it seemed to endorse India’s decision to stay away from Beijing’s One-Belt-One-Road Sum­mit by asking countries to respect others’ “territorial integrity and sovereignty”—the argument given by New Delhi on its opposition to the China-Pakistan Eco­nomic Corridor (which passes through PoK, thus violating Indian sovereignty), a OBOR centerpiece.

The joint statement issued after the meeting also stressed on “freedom of navigation, overflight and commerce throughout the region” and a call for nati­ons to “resolve territorial and maritime dispute peacefully and in accordance with international law”. Though China was not named, the reference to it was unmistakable. But are US statements on Pakistan and China reliably substantive in terms of policy?

Historian Srinath Raghavan points out that though the Washington document contains reference to China’s OBOR, bey­ond a point it really does not matter as neither India nor the US have any competing connectivity projects comparable to the one being pursued by China. “Despite such criticism, there is no alternative for most countries to the Chinese project,” says Raghavan. On Pakistan too he was sceptical, poin­ting out that much of these were being said to keep Indians happy for the time being. But the US pos­i­tion might change after the review of their Afghan policy in July. “We will have to wait and see its approach towa­rds Pak­istan, since the US needs active support and help from Islamabad to bring stability in Afghanistan,” says Raghavan.

But what positives are New Delhi to derive from Modi’s two-day sojourn?

Primarily, it assured India that a US under Trump was committed to build strong bilateral ties. However, the Indian leadership will have to brace itself for the future, when many of the real issues come up for discussions on the wings of actual ground developments, and when there would be a likely divergence of views bet­­ween the two sides. How a maverick like Trump reacts then will be the real test of India-US relations. Significantly, its durability will also play an important role in determining India’s relations with China, and by extension, Pakistan. Conversely, India’s intractable neighbours imbue the India-US relationship with much of its real challenges for the future.