Must have been tough to do it all in half a page, but our resident derisive dude seems to have been discriminating ... 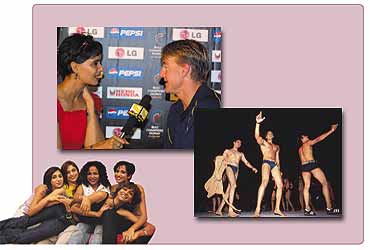 outlookindia.com
-0001-11-30T00:00:00+0553
Ruby Bhatia & Other Long Legs
Max unleashed Ruby Bhatia, Maria Goretti and other such non-cricketing nouns during the telecast of the icc Champions Trophy. It was a ‘Bodyline’ tactic that Sidhu would have said "bamboozled" cricket-lovers. Ruby sat with some masters of the game, giggling throughout. She even made observations on Jeff Thompson’s striped pants. It would have been truly rewarding had Jeff bowled the famed 100 mph delivery at her. A nice short-pitched one (at her teeth especially) would have been a good service to the game because she is expected to come back for the World Cup.

Pop goes Viva
Five girls came through to form Viva, India’s first girl band. They were asked to wear good clothes, drink carrot juice and pretend to sing when someone’s photographing them. In the end, as expected, they’ve split. As we are about to forget their names, here is perhaps the last description you’ll see of them in print: one tall one with African lips, one lean one who was never really comfortable, one with big eyes who decided to quit, one short plump one whom everybody liked because she was short and plump and another one.

Celeb columnists: Please Do Something Else
When it started, Nina Pillai’s column was an apt retribution to the Englishmen who ruled us. We showed them how we could torture the language they left behind. But now that we know her heart bleeds sometimes, and her heart beats faster during other times, should the ex-cookie queen continue to write?

Male models—Yawn...
In a world that never looks at men, this year saw some men who made matters worse. There were several male models who walked down the ramp but thankfully went backstage pretty fast. Female models continued to be the only attraction in fashion shows. So if you’re tall, big and have a dead face, there is more glory in being a statue. And...