Trailings Of A Lonely Voice 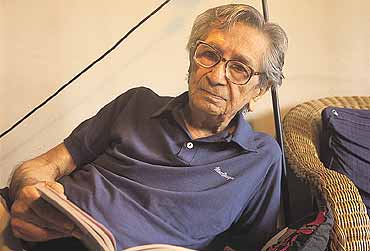 Aaj Ke Ateet
By Bhisham Sahni
Rajkamal Prakashan Rs 250; Pages: 311
Bhisham Sahni, the celebrated writer, was a man of many accomplishments and extreme modesty. He carried his numerous honours and awards with grace and lightness. He charmed everybody with his self-deprecating humour and a luminous smile that had its source in his guilelessness. His voice, both as a writer and a man, was serene and pure and resonant with humane reassurances. His immense popularity was not a result of any pandering to vulgar tastes but a reward for his literary merits—his sharp wit, his gentle irony, his all-pervasive humour, his penetrating insight into character, his mastery as raconteur, and his profound grasp of the yearnings of the human heart.

Bhisham Sahni won laurels as a novelist notably with Tamas and Mayyadas Ki Marhi; he made his mark as a playwright particularly with Hanoosh and Kabira Khada Bajaar Mein; he stood out as an actor even in his few brief appearances in films like Mohan Joshi Hazir Ho and Mr & Mrs Iyer; but he was at his best in his numerous ‘masterly brevities’, if I may use these two felicitous words of Henry James for the short story. He orchestrated what Frank O’Connor termed "the lonely voice" and produced an astonishing number of unforgettable and often haunting stories about ordinary people enduring extraordinary hardships and humiliations. He portrayed the dignity of their endurance without, however, romanticising their plight or glossing over it or offering any simplistic panaceas.

His commitment to Marxism and socialism never degenerated into lachrymose humanity or a loud purposiveness. His irony and humour saved him from sentimentality on the one hand and messianic overposturing on the other. He did not allow his ideology to blind him to the intricacies of the human condition. As a writer, he can be classified among those who draw their inspiration primarily not from their own interior mindscapes but from external reality. For an effective rendering of this reality, a mastery of the observed details of human behaviour and the material world is indispensable. But without the quickening touch of a richly creative imagination, the mass of observed details can result in a heap of dead information. Bhisham Sahni had that rich creative imagination in abundance. He also had a tragi-comic vision which gives his ostensibly conventional ambience a modernistic aura.

Bhisham Sahni’s last published book, an autobiography with the quiet title Aaj Ke Ateet (The Pasts of the Present), is a beautiful culmination of a lifetime of excellent writing. Apart from giving us an intimate account of some of the salient phases of his life, it epitomises his literary qualities. It is full of fun and insights; it is variegated; it is fair; it is unsmug; it is absorbing; it is also his farewell to his family, his milieu, his readers, and his friends.

He begins at the beginning and ends very near the end. The book glows with the sense of ending without, however, any trace of morbidity or self-pity. The early part, where Bhisham tenderly evokes his earliest memories and records his childhood in an affectionate middle-class family in Rawalpindi, is for me the most moving part of this self-portrait. With characteristic elegance and an unfailing eye for the significant detail, the elderly author looks back with nostalgic longing at the world of his childhood and achieves a small but brilliant portrait of the artist as a little child. As we read further, we see the development of a very engaging ambiguity, if not ambivalence, between Bhisham and his elder brother Balraj, the future great actor. Even though it covers only a few pages of the book, this important relationship is etched on our consciousness. Balraj was perhaps the most overwhelming presence in Bhisham’s life. It reminded me of another pair of illustrious brothers, Henry James and William James, and of the autobiography Henry James wrote, Notes of a Son and Brother.

Though extremely interesting, this exquisite book has an unevenness of proportion, though not of quality, among the various sections. The sections devoted to Lahore and Moscow could have been more detailed. Had Bhisham more time, I am sure he would have delved deeper into his experience as a young man in Government College, Lahore, and as a translator in Soviet Russia. Towards the end of the book he offers us a bouquet of his favourite lines from various sources—the mellifluous Gayatri mantra, a few lines from the Bhagvad Gita, a few lines from Surdas and Kabir, and two verses from the great Urdu poet Iqbal. With these he builds a secular altar to his faith in life and humanity. It is a gesture of piety performed with consummate grace and humility typical of my dear departed friend.