While we are busy talking of second generation reforms and disinvestments isn't it time to truly take ownership of our own country?
Free Speec 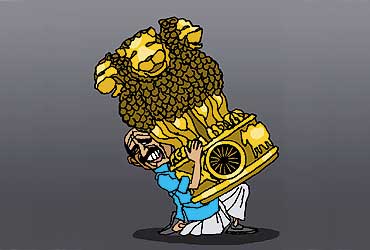 outlookindia.com
-0001-11-30T00:00:00+0553
"And yet the same revolutionary beliefs of which our forbears are still at issue—the belief that the rights of man come not from the generosity of the state, but from the hand of God."
—President John F. Kennedy, inaugural address

"A measure of political liberty meant little indeed when the fear of starvation was always compelling the vast majority of people everywhere to submit to the will of the few, to the greater glory and advantage of the latter. Russia apart, the theory and philosophy of Marxism lightened up many a dark corner of my mind. While all other systems were groping about in the dark, Marxism alone explained it more or less satisfactorily and offered a real solution."
—Towards Freedom: Autobiography of Jawaharlal Nehru

And there lies the difference. While Kennedy expounded on the birthright of every individual, Nehru believed it was only the state that could be trusted to remove poverty. His daughter Indira continued his legacy, mistrusting and contemptuous of the business world, they believed that the state in their hands knew best.

There are many questions. What would they say now, in today's much changed world? The opposite of what Marx predicted has actually taken place. Marx, using Hegel's dialectic, had said that Communism is the final epoch where human beings reach their highest potential. Well, we could have a truly Indian answer to Nehru's intellectual decisions. "The poor guy had good intentions and meant well." And, who was supplying his reading material in jail? Much like any young, sensitive, privileged person in India, he bled for the starving masses. But, unfortunately, instead of doing what many young Indians do, which is become a Commie for a while and then realise the futility of it all, settle down to reality, poor Nehru was thrust into a position where his intellectual exercises became policies for a young India.

Father and daughter unleashed a system where the state decided what we could own, how much of it we could own, how we could do (or rather, not) do business, restrictions, restrictions everywhere, even to open sorely-needed schools and hospitals. The state knew best, even deciding what news we should watch on TV, restricting the public's right to know the truth by not allowing private news channels. The list of limitations on our freedoms could fill this whole article.

Now, as the restrictions have gradually been reduced, India is in a state of transition where the Indian citizen as entrepreneur is forging ahead, yet the old school diehards are trying to forget the power they had in saying NO to every application, licence and permission.

Yet, the Indian citizen has a long way to go in making the transition to an individual born with rights that aren't handed out as noblesse oblige by the state. He is yet to demand performance from his government. The Indian citizen's psyche is light years different from an American citizen.

In America, the concept of capitalism spills into government and the US citizen. The United States of America Public Limited. That's what it really is. Capitalism is so deeply entrenched in the American psyche that the government actually runs like a corporation that has to give returns to the public. And, like any corporation it is in a constant state of accountability to its investors, who are, of course, the American taxpayers. The government/corporation has to ensure that its product and the product's image are sold to the consumer at all times and the consumer reigns. The taxpayers' attitude is much like they are paying for a service and it better be worth it. The government has to convince its customers constantly that they are getting their money's worth. Every decision taken and policy implemented is sold to the consumers like any company would sell a product: ad campaigns, press conferences, off-the-record briefings. The propaganda machine crunches out on a massive scale. Sometimes so cleverly done, no one recognises it as propaganda. Most of the time, it passes off as "news". The media is often a co-conspirator in this propaganda machine.

What Americans think and how they think does not just happen by accident. A plane carrying marines on their way to Afghanistan to "fight for their country", deliberately flies over Ground Zero to remind them what was done to their country. Interviews of emotional, hyped-up marines are shown on all the networks. The aircraft carrier Theodore Roosevelt, now off the coast of Pakistan in the Arabian Sea, carries an American flag that was found in the rubble and hoisted by three New York firemen at Ground Zero. The men who found it were on all the networks hailed as heroes. Vanity Fair, a magazine that usually carries articles of murders and other foibles of the rich and famous, carried a 19-page spread on President Bush's wartime team. Gushing, is putting it mildly. The article ends with, "But when the September attacks came, there was a reassurance—...in a president who rose to the occasion." This is about a president who was generally treated as a joke, is word-challenged and who did not know the name of the Pakistani president when he was running for election. You keep reading this stuff, seeing this stuff, hearing this stuff and you don't even know when you begin to believe it. That is the success of true propaganda. The point is, the US government is not only forced to be sensitive to its citizens and involve them, it has to appear to be so.

What are the lessons for us here? We have to become demanding and contributing citizens, for example, H.D. Shourie, Anil Agarwal and lawyer M.C. Mehta. The government will only become accountable if we actively demand citizen-sensitive performance. It took seven years for Navin Jindal to win the right to fly our national flag. The time has now come for us to truly take ownership of our own country. Not just belong to it. We must own India.