Simplistic binaries fail, in the Arab world as in the West 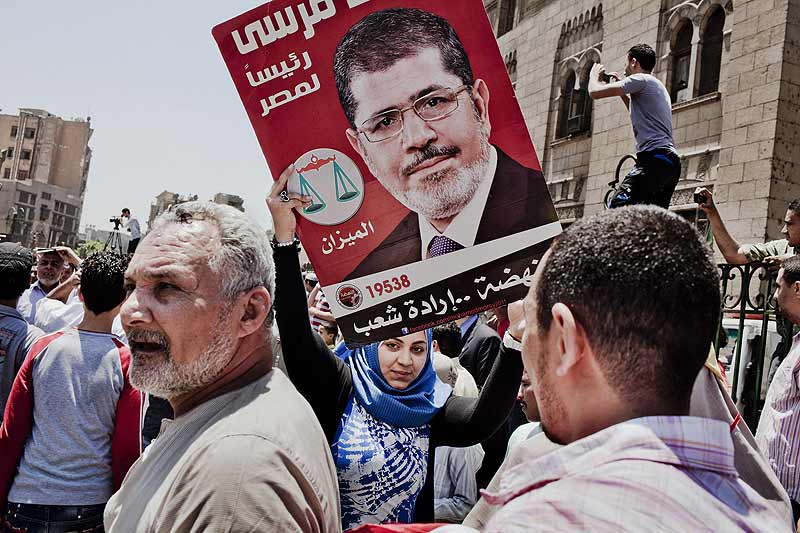 During a recent visit to Cairo, I met a young online journalist named Asmaa Loffi in Tahrir Square. She was dressed in jeans and a dark shirt and, beneath the veil tied tight around her head and neck, her bright eyes gleamed. She told me she had worn the hijab since she was 12.

“It was not imposed on me,” she said, “but I wanted to follow the Prophet.”

Then Loffi told me about how she feels “suffocated” when she listens to the long speeches of Egypt’s president, Mohammed Morsi, who comes from the Muslim Brotherhood; how she worries about women’s rights; and how, after long reflection, she voted against Morsi in Egypt’s first free presidential election last June. Her ballot went for the more secular candidate, Ahmed Shafik, an associate of the ousted Hosni Mubarak.

She spoke with passion about how Egyptians had been suppressed and how they at last threw off their chains in an “explosion” of defiance on Tahrir Square almost two years ago. Her reluctant vote for Shafik was a question of the lesser of two evils.

So here was a devout, university-educated, veiled, 21-year-old Egyptian woman who had voted for the anti-Brotherhood candidate in the election, was passionate about free speech and a free press, but was equally passionate about what she called the “internal serenity” that the hijab brought her.

In other words, Asmaa Loffi was a living repudiation of all the trite religious-secular, either-or, clash-of-civilisations intellectual constructs through which the world has tried to address the Arab Spring, conflict between the West and Islam, and, more generally, the place of religion in political life.

“Why,” she asked me, “do you so often associate the veil with religious fanaticism in the West? Egypt was a Muslim country long before there was a religious party. I wear a veil because that is how I feel comfortable.”

She went on to make the point that during the three decades of Mubarak’s Washington-backed autocratic rule, the United States had shunned the Brotherhood as Islamist fanatics. “And now the Brotherhood is alright, and it’s the Salafis who are fanatics, and you even talk to them!” 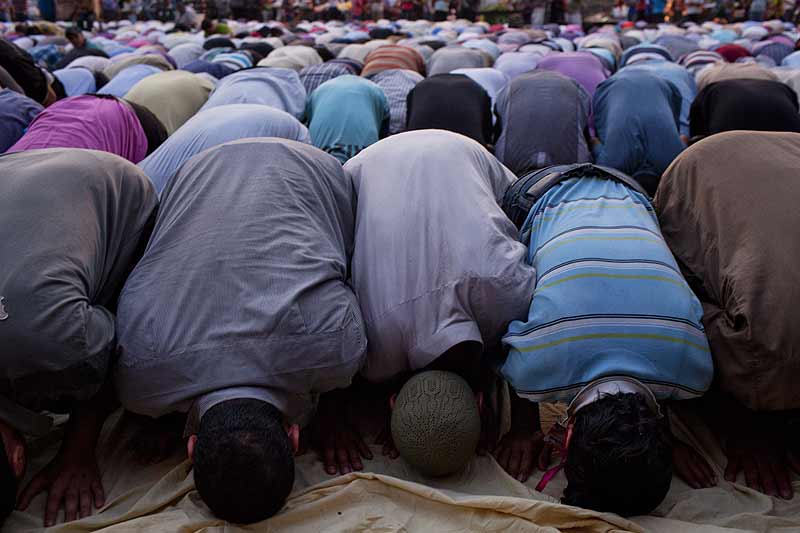 The old barriers, she suggested, built to serve Mubarak’s self-portrayal as the West’s last bulwark against jehadist extremism, had been false and paralysing.

It is time to think again about the relation that the West is often quick to draw between religion and backwardness on the one hand, and secularism and modernity on the other. For West Asia, as it emerges from western-backed tyranny, becoming “secular” is not necessarily the answer to its problems.

That should be easier for the United States to perceive than it seems at first to be. Religion, after all, is intrinsic to America’s sense of itself. But the rise of politicised, militant religion—whether in Egypt or the United States or Russia—often colours perceptions and overshadows the many Asmaa Loffis the world over who are devout, yet convinced of the need for a separation of church and state.

West Asia has tried rapid secularisation—whether under Ataturk in Turkey, or the Pahlavi dynasty in Iran, or Bourguiba in Tunisia, or Nasser in Egypt, or the various Baath party regimes in Iraq and Syria—only to see it produce a powerful, sometimes violent Islamic reaction, in part because state quashing or control of religion proved to be no more than a form of despotism.

Islam was a refuge, a reclaiming of a lost heritage, a bastion against imported ideas. Political Islamism, from the time of Hassan al-Banna’s founding of the Muslim Brotherhood in 1928, was always a reaction against western colonialism in West Asia and the attempted imposition of the secular model of an alien world.

Enough time has been lost bouncing back and forth between forced secularisation and a static Islam. This yo-yoing has not delivered for young Arabs. Their demand in Tahrir Square and elsewhere was for something new: a culture at once authentic and modern, homegrown and open.

This yo-yoing has not delivered for young Arabs. Enough time’s been lost in the bouncing back and forth between a forced secularisation and a static Islam.

As Tariq Ramadan notes of the Islamist movements in his book, Islam and the Arab Awakening: “They are much more successful in opposing than in developing credible proposals for the future. Their historical resistance to colonialism, their debate with the secularists, their rejection of the West (in a repulsion-attraction relationship), the legitimacy derived from their hostility to Israel all conferred upon the Islamists the legitimacy of a moral counterweight; but these very accomplishments did not allow them to make a hard-eyed, critical assessment of their own political programme.” Now the Islamists have to come up with such a programme. They have to deliver.

The Brotherhood is in power in Egypt. Ennahda is in power in Tunisia. Being anti-western is not going to feed the hungry, teach the illiterate or create jobs. Nor are riots at perceived western slights to the Prophet. If Islam is to be genuinely political, it cannot be off-limits to criticism or even ridicule.

Rather than invoking the readily available enemies—the West or Israel—these parties will have to provide opportunities for the great mass of young people who want freedom and pluralism and jobs for women and the curtailment of corruption. They will have to understand that Shariah law may be acceptable to a majority of citizens if understood as a compilation of orienting principles, but not if it is seen as a penal code whose rulings must be strictly imposed.

Turkey, where a party of Islamic roots has ruled for a decade, may offer a useful model.

In a sense, they will have to become post-Islamist to chart an original path that combines faith with democratic inclusiveness. They will have to shift from a culture of resistance to one of outreach. Morsi could do a lot worse than keep in mind the likes of Asmaa Loffi, a devout Muslim who is also a determined moderniser, as he tries to take Egypt forward.

The West should also keep Loffi in mind as a reminder of how inadequate are classifications like Islamist and secular. The West’s own secularism sometimes seems to be in retreat—to the point that when Britain’s Labour leader Ed Miliband declared at a party congress that he is “a person of faith, not a religious faith, but a faith nonetheless”, he was saying something no American political aspirant would admit today. Miliband suggested that his form of faith was one that “many religious people would recognise”—a belief that “we have a duty to leave the world a better place than we found it”, that “we cannot shrug our shoulders at injustice”, and that “we can overcome any odds if we come together as people”.

Still, it would not pass muster in the United States.

In Russia, where for 70 years the Communists tried to stomp out “the opium of the masses”—where Lenin declared, on coming to power, that “the more representatives of the reactionary clergy and reactionary bourgeoisie we manage to shoot on this occasion, the better”—the successor to the commissars now seeks to coopt the church. Vladimir Putin, the ex-KGB agent, had two members of the punk band Pussy Riot sent to a distant gulag for performing a “blasphemous” punk prayer in Moscow’s central cathedral.

The extremes shout loudest; they tend to obscure plurality, nuance. Miliband’s secular “faith” is more than the Salafis, the Tea Party can digest.

But religion cannot be the untouchable shield of the ruler in Moscow anymore than in Cairo—or in Washington. The long US election campaign touched often on candidates’ religious bona fides and on issues, like the right of women to an abortion, where God was invoked (mainly by men) as arbiter. A declaration of atheism is as good a way as any to cut short a political career in the land of “one nation under God, indivisible, with liberty and justice for all”. The nation’s divide between God-invoking conservatives and secular progressives has become a source of immobility and dysfunction.

American politics has come a long way since John F. Kennedy’s advocacy of the separation of church and state—a position that the ultra-Catholic Republican Rick Santorum said during the recent campaign made him want to “throw up”.

A half-century ago, Kennedy’s Catholicism was suspect as “popish”. Today, Santorum’s faith, like Mitt Romney’s Mormonism, merges seamlessly enough with the evangelical-inspired social movement for “family values” and traditional gender roles. This God-invoking push against abortion, gay rights and marriage equality—against the whole liberal agenda of what Texans like to call the People’s Republic of New York (as well as other coastal cities)—has become a core component of the US political landscape and a central line of cleavage in American culture.

It has also become a political liability for the Republican Party, to judge by the US election results.

It is striking that it is precisely America’s evangelical right that is most ready, in Loffi’s words, to equate a veiled woman with Islamic fanaticism, to see the threat of Shariah law everywhere, and to dismiss the Arab Spring as no more than the onset of chaos in which jehadist extremists will thrive.

Even as they pull God into a more prominent role in US political life—going so far in some cases as to declare that pregnancy from rape may be a gift from God—they deplore a political Islam they seem determined to caricature as a monolithic enemy. God, it seems, may be a legitimate authority in the Bible Belt, but not in Babylon. In fact, Islam is ever more diverse, informed by the different cultures where it is embedded, and no more susceptible to the simplistic good Muslim/bad Muslim divide than Christianity or Judaism.

Of course, the extremes shout loudest; they tend to obscure plurality and nuance. Miliband’s secular “faith” is more than the Salafis, the Tea Party or Putin’s god squads can digest. But it is of a piece with Loffi’s religious “secularism”—her devout commitment to a society governed by laws with equal rights for all.

You can be devout or secular in your belief that the affairs of man are best governed here on earth without intrusion from God. The opportunity has never been greater in West Asia, after all the sterile back and forth, to bridge the gulf between outmoded binary slogans and create democracies that are neither “Islamist” nor “secular”. But as Ali Mohammed, a friend of Loffi’s, put it to me: “Building a democracy is not like boiling eggs.” No, it is generational work that requires both understanding and support. In theory, societies like the United States and Israel, where religion plays such an important role, should be well placed to grasp the challenge—if God’s revelations to his most impassioned followers were of a less parochial variety, and if the Muslim Orient were at last seen not as needing western emancipation but Islamic evolution.

“We are free,”’ Loffi said. “Whatever happens, we are not going back.”

Cohen has filed by telex from Beirut and via satellite from Benghazi. In between he’s watched Europe unravel, China rise. He writes the IHT’s ‘Globalist’ column.

An International Roster Of Thinkers On The Big Q: What’s Gender Equality?