For autonomy’s sake, says the government. IIM academics aren’t buying any of it. 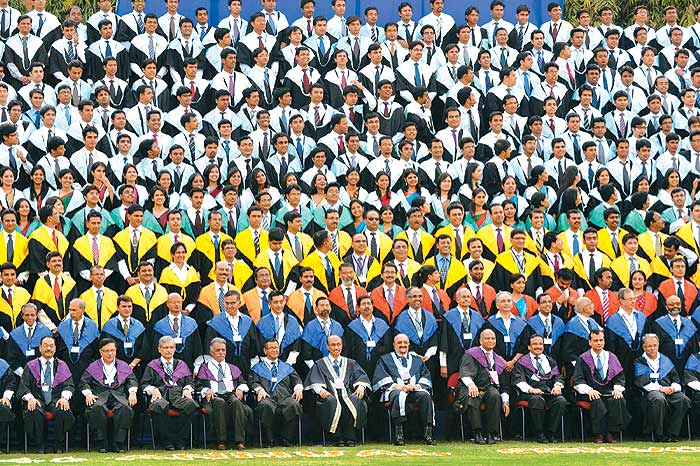 Key structural changes proposed by the R.C. Bhargava and Ajit Balakrishnan committees set up by the HRD ministry

Can you really fool some of the best brains in the country? Going by the backdoor efforts of the Union ministry of human resource development (MHRD) to ‘privatise’ the Indian Institutes of Management, it would certainly seem so. The faculty at IIMs across the country is exercised over the ‘insidious’ recommendations made by three committees (set up by the MHRD in April 2010), following a ‘retreat’ in Bangalore. IIM chairmen, directors and a few alumni had attended that brainstorming session, with HRD minister Kapil Sibal himself in the chair. The purpose of the conclave was to discuss the ‘new challenges’ before India’s premier B-schools from FDI in education and private management schools.

The panels under the chairmanship of three businessmen—R.S. Bhargava, Ajit Balakrishnan and Hari S. Bhartia, also chairmen of IIM Ranchi, Calcutta and Raipur respectively—came up with a slew of interlinked suggestions which the IIM faculty fears will alter the very governance structure of the institutes and curb their academic freedom. However, more than the Balakrishnan and Bhartia panel reports—which look into aspects of teaching, research and fund-raising—it is the Bhargava panel report, they feel, that ‘unabashedly’ attempts a ‘backdoor’ privatisation of the IIMs.

These recommendations would not have raised faculty hackles had they not been accepted ‘in principle’ at a meeting held on October 13, 2010, by the HRD ministry to review the reports. What has also upset the academics is that they were kept in the dark about the existence of the panels, despite being one of the principal stakeholders, till almost mid-January 2011. “Why are these panel reports not available publicly? They are not up on the MHRD website,” says Prof Anindya Sen of IIM Calcutta. “We had to struggle to get copies after we learnt about them. Why aren’t they willing to debate them?” The ministry has tried to defend the ‘reforms’ in the name of granting the IIMs more ‘autonomy’, but the word ‘autonomy’, says the faculty, is a red herring.

Not just that, when the faculty at the three of the oldest IIMs—at Ahmedabad, Bangalore and Calcutta—learnt about the recommendations and tried to ask questions, they were either snubbed or gagged. Industrialist Mukesh Ambani, also chairman of IIM-B, it is learnt reliably, spoke harshly to the faculty when the issue was raised during a meeting in January, going to the extent of saying that “disciplinary action” would be initiated if they didn’t fall in line. Faculty members described the experience as “very humiliating” and the “worst experience” so far in their academic lives. One academic even said that he would rather quit than be in an “Ambani IIM”.

The faculty at IIM-C was more structured in its response. They wrote a policy position paper rebutting each of the contentious points in the reports. But they were not allowed to send it across either to the ministry, their board of governors nor place it before the public. “The gag order of chairman Balakrishnan came in the form of a request,” said an IIM-C faculty member. Finally, last week, on March 31, they not only decided to violate the ‘gag order’ but also set up a faculty committee to pursue the matter.

The faculty can’t get why Sibal thinks the proposal on donations is well-meaning, why he hasn’t rejected it.

What exactly are the recommendations of the Bhargava panel on a “new governance structure” for the IIMs? The report argues that the IIM society, which forms the foundation of each IIM, should function as an “enlightened owner”. But this, it contends, is not happening in practice. “The government, which has provided the bulk of the capital cost of the IIMs and considerable amounts of the revenue expenditure, has not been able to fulfil this function,” the report observes. “The board, because of the way it was constituted, and the powers with it, also has not discharged this role.... The faculty cannot be expected to play the role of an owner.” Following this logic, it recommends: “We believe that the most effective way of bringing this about is by making payment of substantial donation to the IIM as a condition of becoming a member. This would be equivalent to a person having an equity stake in a company.” So, it says, corporates, ‘suitable’ individuals and alumni should be invited to be members by paying Rs 20 crore, Rs 5 crore and Rs 3 crore respectively.

On the constitution of the board, the Bhargava committee recommends a reduction in size from the current 26-28 members to anywhere between 12 and 14. It also thinks diversity should be clearly done away with; the existing boards dissolved and the term of the new board fixed at five years, but there need not be a limit to the number of times a person is appointed to them. It also says that the board should set targets for the faculty and review it. As for the Balakrishnan committee report on ‘faculty and research’ at the IIMs, the part that’s raised the most furore relates to the increase in teaching hours to 160 hours from the present 90 to 100 per year.

Reviewing the reports in the October meeting, the HRD minister accepted shrinking the board size, decided unilaterally to impose the 160-hour teaching schedule and a few other recommendations related to appointments. Interestingly, however, it remained ‘ambiguous’ on the change to be brought about in the society structure. In what sounded like an echo of a line from the report, the minutes of the meeting said the HRD minister suggested that IIM societies “should ideally have members who take continuous interest in the long-term running of the IIMs”. But item no. 7 of the agenda—‘Concluding Action Points summed up by HRM’—is revealing. Point no. 6 says: “The Bhargava committee would further consider how to attract suitable persons to the society.”

Further, a recent internal note of the ministry, answering the charge of ‘privatising’ IIMs, says: “The recommendations were discussed in a meeting of chairpersons and directors of all IIMs on October 13, 2010, and it was felt that the specific recommendation of raising donations, though well-meaning, could be misunderstood. Therefore, no decision was taken on this proposal and the minutes of the meeting reflect this position.” The faculty cannot understand what is ‘well-meaning’ about that recommendation. “The minister is not unequivocally rejecting the proposal,” says Prof Mritiunjoy Mohanty, IIM-C (see column). “It is under consideration and that is a huge problem. When all other recommendations like reducing the size of the board and its plurality have been accepted, it is tantamount to indirect corporatisation.”

An IIM-A faculty member points to the amended Memorandum of Association and Rules (MOAR) governing IIM-B, which now serves as a template for other IIMs to effect changes in their respective MOARs in the wake of the Bhargava panel recommendations. “There is one new segment which says there is no need for the government’s approval to change bylaws; a board approval would be sufficient,” he says. “Suppose, for argument’s sake, we get a corporatised board and the society membership rules are still unchanged, with this power to change the bylaw, you can wreak havoc. So, technically, the minister is right, he has not yet approved the donation model for societies, but the other changes he has approved gradually add up to the bigger agenda of corporatising IIMs.”

Prof Sen is blunt. “When you are trying to take over a company, you don’t immediately get 51 per cent of the shares,” he says. “You first get 46 per cent, then 49 per cent and one day you’ll manage 51 per cent.” Prof Anil Gupta of IIM-A is equally vocal: “If society membership can be bought in the marketplace, then what happens to stakeholder representation, how can an innovator, inventor, policy change agent or an activist become a society member? They cannot pay. Can we not nominate some such social change agents to the IIM society?”

The IIM faculty charges the Balakrishnan report of trying to ‘discipline’ the faculty members in the name of ‘accountability’. The 160 hours of teaching recommended and accepted for all IIMs, they say, is insensitive to the academic orientation of each IIM. No academic institute of excellence and higher learning in the world forces its teachers to teach four full courses a year, they say. “I do feel that faculty must teach more and do more research,” says Prof Gupta. “But the problem is those who teach more generally have more research and policy impact also. Can we have a uniform standard when each faculty member needs a portfolio of activities? Asking a poor teacher to teach more is punishment to students.”

Former bureaucrat and IIM-C professor P.K. Sett dismisses the panel reports on an altogether different ground. He says they neither contain a logical premise nor a proper framework. “They’ve jotted down points casually and called it a report,” he says. “Where is the data to substantiate all that they’ve said? You can have views but that can’t be a report. Ironically, in these reports, there is not a single data table. It is sad that despite academics (IIM directors) being on the committees, they have gone so horribly wrong.” This is the nail Prof Gupta drives in too: “We haven’t had more timid and myopic IIM review reports. Fixing a system which works can only be advised by people who’ve never achieved excellence in their own lives.” Who cares if it ain’t broke, they’ll still fix it.