Contributors respond to an invitation from Outlook to revisit their memories and describe their defining Indian experience. 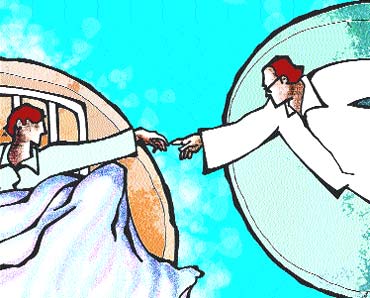 
Touching, Feeling...
Contributors respond to an invitation from Outlook to revisit their memories and describe their defining Indian experience.

Is it possible to get beyond current buzzwords like India Shining, or Not Shining, and 9 per cent growth, with or without equity, and 60 years of this, that and the other, while writing and reflecting on India? The short answer is yes. The long answer is contained in this series of memorable essays by contributors who have experienced India in different ways. They all responded to an invitation from Outlook to revisit their memories and describe their defining Indian experience. A Pakistani experience of India was sorely needed, repeatedly promised, but alas, not delivered. Perhaps they have other things on their minds. Meanwhile, what did arrive was delightfully varied, ranging from the uproariously funny and wry, to the sentimental and sombre.

And should we be surprised that no two experiences are the same?

PATRICK FRENCH
I Hereby Attest Thee... Man And Wife
So we were married, followed by laddoos and the instruction: You may now cross-feed

TASLIMA NASREEN
I Am But A Disembodied Voice, The Living Dead
What have I done that I can neither cross my own threshold nor enjoy human company?

JAN MORRIS
A Panchatantra Of My Very Own
Encountering Gandhi's Dandi, rare Raj relics, a pickpocket, a wanderer and a cool cabbie

MUKUL KESAVAN
And The Alarm Would Go, One, Two, Cha-Cha-Cha
Refugees from the streets, killers from next door, the terrible violence inside us

IAN JACK
Life Flowing On The Ganga, As Seen From My Sick-Bed
A steadily accreting generosity amid the bedlam that wraps one in a lasting warmth

LORD MEGHNAD DESAI
Three Encounters, One Enduring Image
I once chanced upon my hero, the PM. But it was two deaths that showed me the real India.

LAILA TYABJI
Jungle, Bihar, Night, Apparition... Read On
The badland backdrop lingered. Until both sides got to know the face behind the image.

DOMINIQUE LAPIERRE
Calcutta: One Saintly Morning, 26 Years Ago
That encounter with Mother Teresa changed my whole life and worldview

LLOYD I. & SUSANNE RUDOLPH
Emergency: Notes In Transit
Metaphor, analogy, circumlocution, we tried it all

STEVE MCCURRY
The Before, During And After
It was my best time, the summer I spent chasing the Monsoon

JASON OVERDORF
Objective Observations By A Ludicrous Freak
Often, it all ends up as a strange, involuntary, one-man circus act by a bald white man

MANJUSHREE THAPA
When India Was Legible
Big Brother helped in the democracy battle. But I can't read more.

CATHERINE CLEMENT
The Man I Met In Mid-Flight
There was something about KRN: a child of Nehru, deep, smiling

NANDITA HAKSAR
Democracy, Hang Down Your Head And Cry
A young man's painful death in a Manipur village; an indelible taint on the Indian dream

M.G. VASSANJI
We Didn't See The Inner Courtyard
Partition, we didn't relate to, except as event in the family chronicle. Till, we went back.

MARK TULLY
Ah, It All Comes Out Right In The End
The 'chalne do' precept has a lot going for it. Or does it? A Pune trip offers few conclusions.

RAMESH RAMANATHAN
"Nope, I Just Quit..."
That final leap of faith: dropping out, tuning in with India