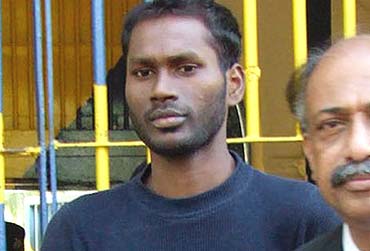 Is it a coincidence that every time the Narendra Modi government finds itself in hot water, a saffron-tinged 'cultural' issue crops up that helps divert attention from its troubles? The saffron brigade's assault earlier this month on the Fine Arts Faculty, MS University, Baroda, provided a timely diversion for the Gujarat dispensation, under fire for the Sohrabuddin fake encounter case. The architect of the May 9 attack was Niraj Jain, a VHP-Bajrang Dal activist, and his target, 23-year-old final-year student Chandramohan Srimantula, a Lalit Kala award-winner.

It was upon being tipped off by a local journalist that Jain and his saffron stormtroopers descended on the Faculty and vandalised Chandramohan's works, on exhibit for an examination assessment. They claimed his artwork, of religious images with anatomical details, was obscene and offended their religious sensibilities. The police arrived and arrested the student, who was charged with being a threat to peace and communal harmony. He spent four days in the lock-up before the judge ruled that his intentions were not malafide, he posed no threat to public peace, and let him off on unconditional bail.