Tot For The Day: No Work And All Play

With no need for approval or affiliations, playschools are the easiest to open these days 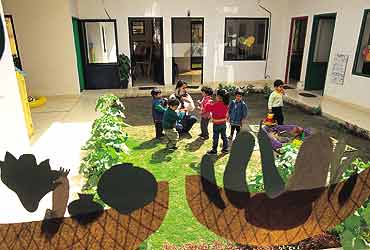 "With working couples, nuclear households and single-child families increasingly becoming the norm these days, parents are relying heavily on pre-schools to care for their children," says Dolly Kochhar, owner of A Step Ahead, a playschool that started with two students last September in Gurgaon, a Delhi suburb that already has scores of pre-schools. Now it has over 30 children, some just a year-and-a-half old who come in accompanied by their mothers. The mounting pressure to prepare children for admissions into big schools, Kochhar feels, is the main reason why parents shop for playschools. "We have even started counselling workshops for parents to cope with the admission stress," she says.

And this demand is finding more suppliers by the day. Started by Lina Ashar in 1993, the Kangaroo Kids Education Limited with facilities for toddlers, pre-school and primary schools, is now expanding like never before. The focus is on pre-schools, with the fee for children between ages two-and-a-half and six years averaging at Rs 1,800 a month and varying between Rs 2,000 in cities like Delhi and Rs 1,000 in Ludhiana. "There is a flood of admissions at Kangaroo Kids and we don't even advertise. It is all by word of mouth," says Ashar. "Long dominated by fly-by-night operators, today there is clearly a demand for quality pre-schools in the country."