Toss Out That Cookie-Cutter 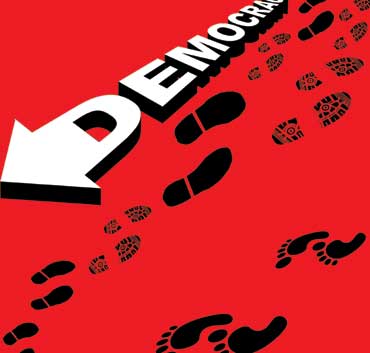 outlookindia.com
-0001-11-30T00:00:00+0553
Each election in India is a rebuff to those who read India and its politics according to the simple patterns in their own mind. That this round of assembly polls spawned its fair share of pop analyses that self-destructed is by itself no surprise. But the overlap—and in some cases, simultaneity—of the polling process with the attack in Mumbai offered a grander scale of error. As voting in four out of five states succeeded the terror drama, the instant judgement of the chattering classes mirrored their own latent national chauvinism: terrorism, they said, would be the overriding issue with the voters. Indeed, opinion polls even asserted the Mumbai attack would be the biggest factor in the Lok Sabha elections, still months away. To give due credit, there were columnists who saw the high voter turnout for what it was. They recognised that the aam admi did not share—and thankfully so for Indian democracy—the outrage of the chattering classes against politics. Yet these columnists too could not suggest that the masses would vote with cool-headed calculation even in the wake of such momentous tragedy, and not be swayed by the kind of confused, irrational emotions the elite betrayed when hit by a crisis. It is not that the rural voter does not understand the gravity of the threat posed by terrorism; even the aam urban Delhi voter paid no attention to the BJP's last-lap aggressive campaign on the issue.

There are Congress leaders who would like us to believe their party could have done better in Madhya Pradesh were it not for the fact that the state saw polling when the terror attacks were still on. Congress spokesperson Shakeel Ahmed said so on a news channel, arguing that the effect of the attack waned by the time Delhi and Rajasthan voters voted. But this is an obviously lame excuse—an attempt to draw a connection where none exists. Its speciousness is exposed by the fact that the Congress score was sub-par also in neighbouring Chhattisgarh, which had two phases of polling before November 26. People who closely followed the election campaigns can vouch that voters reached their decisions the only way they should—after careful weighing of options presented to them, and not under the influence of any mass hysteria of the last minute. Even in the face of a major crisis, it is quite clear that the aam admi has shown much more maturity than the Indian elite.

How do we explain this schism in our body social, the split between, to borrow another cliche, India and Bharat? We have an elite that has lost somewhere along the way the nerve to lead by example and the willingness to share the fruits of progress. It has pampered itself to grow soft and selfish. For self-advancement, it has learnt to control and manipulate resources, both material and human, and forgotten what fortitude means. In times of crisis, therefore, it panics, grows hysterical and, like a mindless herd, votes with its feet instead of gritting its teeth and digging its heels in. On the other hand, for the aam admi, there is an element of crisis in everyday survival. This breeds, besides a stoic courage, a will to engage and a serious weighing of limited options available on the table. Escape is not an option, there is always a decision to be made— good or bad. The aam admi has to vote with his mind, not with his feet.

It is also high time that we exorcise that other cliche—'anti-incumbency'—from the tools of electoral analysis. Out of five states, three have returned their governments, and it is not something new that has happened. At various points in the past too, these states have returned incumbent governments. For instance, Madhya Pradesh had returned Digvijay Singh for a second term in 1998, Rajasthan returned Bhairon Singh Shekhawat for a second term in 1993 and Delhi has been returning Sheila Dikshit for quite some time now. You go further into the past, and these states will show more examples of pro-incumbency than of anti-incumbency. And elsewhere in India too, there would be numerous such examples: for how many years now has the BJP been ruling Gujarat and the CPI(M) West Bengal, for how many terms did the RJD retain Bihar, or the Telugu Desam hold sway in Andhra Pradesh? You will go on finding examples galore, yet we keep talking of anti-incumbency as the default factor, and other examples as exceptions. It is nothing but the mental lethargy of the apolitical that seeks readymade explanations instead of trying to understand how the voter responds to the performance of incumbent governments. The Indian elite must begin to engage seriously with what real democracy is.