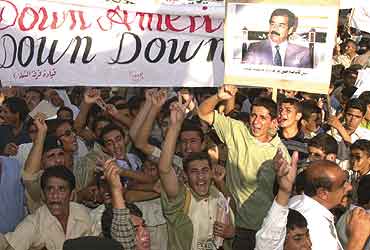 outlookindia.com
-0001-11-30T00:00:00+0553
The tenor of a text is often a better indicator of the author's fears and anxieties than what he ostensibly spells out. There couldn't be a truer instance of this than the Organisation of Islamic Conference (oic) meet at Doha, Qatar, where 57 foreign ministers of Muslim countries came together last week to fashion a united stance on Washington's 'War against Terror'. No doubt the oic communique supported Washington's operations against Osama bin Laden, but its tone simultaneously revealed deep fissures within the Muslim and Arab world—and their fears of the US widening the sweep of its attack to include Iraq and Lebanon in the future.

When the foreign ministers of Muslim countries began their discussions, the Arab League's charismatic chairman, Amru Musa, emphatically declared that "we shan't allow, under any circumstances, attacks on any Arab or Muslim state." His resolve, though, was neither reflected in the oic communique, nor in Qatari foreign minister Hamad bin Jassem al Thani's comment to Al Jazeera. Bin Jassem pointed out tamely: "Furthermore, no more Muslim or Arab countries should be attacked."

The Al Jazeera TV network had in fact set the stage for a more strident communique, revealing before the Doha meet (October 10) that American military exercises, earlier thought to have been postponed, had begun in Egypt's deserts. The satellite channel pointed out that Egypt's topography has greater similarity to Iraq than to mountainous Afghanistan, consequently fanning fears about Washington's intentions.

But the Arab League, which was also meeting on the sidelines of the oic at Doha, did ultimately softpedal the possibility of Operation Enduring Freedom expanding its ambit to include a few Arab states. The League's approach didn't surprise observers. For one, Egypt's foreign minister Ahmad Maher has been trying to distance his country from pan-Arab sentiments; the ouster of Saddam Hussein is something Cairo wouldn't avoid at all cost. Nor would Saudi Arabia and Emirates in the Gulf. In other words, the consensus at Doha barely papered over the divide in the Arab world.

Yet, all these deft manoeuvrings in the Arab world can't camouflage the surge of anti-US feeling among the masses. Indeed, governments of Algeria, Egypt, Jordan, Saudi Arabia, Sudan and Yemen face the daunting task of balancing their cooperation with the US against the palpable surge in radical Islamist opposition. Though ensconced firmly in their capitals, the regimes could face a backlash.

The problems of these regimes have been compounded by bin Laden's speech telecast an hour after the US began bombing Afghanistan on October 7. Hitching his own cause to the Palestinian issue, bin Laden declared that the US would know no peace until there is peace in Palestine. The fugitive Islamist also lambasted several hereditary regimes for supporting the US, which is against the Taliban and backs Israel. Bin Laden's passionate speech found resonance in West Asia and created apprehensions of internal turmoil in several Arab countries.

No wonder Palestinian information minister Yasser Abd Rabbo was quick to tell the Palestinian radio: "We don't want crimes to be committed in the name of Palestine." Yet, not surprisingly, Palestinians were the first to respond dramatically to bin Laden's jehad call. College students in the Gaza Strip took to the streets and attacked the Palestinian police with rocks and Molotov cocktails. The police tried to confine them to the campus; soon a pitched gunbattle ensued in which three students died and another 150 were injured.

The Gaza incident fanned the simmering discontent in the Arab world: Oman, Yemen and Sudan began to reverberate with anti-US feelings. TV pictures of demonstrations in other Muslim countries like Pakistan and Indonesia only inspired those opposed to the US's decision to bomb Afghanistan.

But these demonstrations haven't yet gone out of control and remain confined to radical Islamists. Even in Palestine there are differences between the response of the Gaza Strip and the West Bank. "The West Bankers are far more reserved to bin Laden's messages," says Ghassan al-Khatib, head of the Jerusalem Media & Communication Centre (jmcc), east Jerusalem, and a former member in the Palestinian delegation for peace with Israel. "Pro-Laden sentiments are stronger among Muslim zealots whose strongholds are in the Gaza. The West Bankers are more secular. Bin Laden's attempts to stoke the Palestinian issue is quite similar to what Saddam Hussein attempted during the Kuwait crisis. They regard the Palestinian problem as a merchandise. Those who always suffer are we, the Palestinians."

The police firing in Gaza could have aggravated Yasser Arafat's problem had not the US president talked of resolving the Palestinian problem. This enabled Arafat to at least attempt dissuading Palestinians from perceiving bin Laden as the proponent of their cause. No wonder he thanked Bush at the Doha meet. Though nothing has been promised to the Palestinians, Arafat knows that Washington's hostility could only be detrimental to his cause.

Palestinian sources, however, say that Arafat has gained Washington's appreciation by supporting Bush's anti-terrorism efforts and condemning the September 11 attacks in the US. They also accuse Israeli Prime Minister Ariel Sharon of sabotaging their efforts to usher in peace in Palestine.

Notwithstanding Arafat's praise for Bush, he and in fact most Palestinians are extremely wary of the US. Says famous Palestinian columnist Samih Shabib: "We can't rely on the US. They have their own agenda for the Middle East and Central Asia. Their alliance with Israel is profound and absolute, despite possible differences in opinions. Furthermore, the Arab states have no unified position on Palestinian statehood. There's an Egyptian perspective, a Jordanian perspective, but no joint Arab perspective. We have to unite our home."

Arafat's problem essentially stems from the fact that he allied with radical Islamist groups, who formed the core of the al-Aqsa intifada last year. These are the same groups who support bin Laden and are bitterly opposed to the US. Balancing the duality is a tightrope walk for Arafat.

Indeed, Arafat's dilemma is also the Arab world's. When the Doha meet culminated on October 10, the Bush administration released the list of 22 most wanted terrorists, including Hezbollah leader Imad Mughniyah, sending frissons among Arab leaders. The moot question is: can a distinction be made between resistance and terrorism? The Doha communique did indeed make this distinction. But with the US mentioning Mughniyah in the list of terrorists, isn't the Hezbollah implicitly condemned as a terrorist organisation?

Currently, Sudan and Yemen are helping the US in its intelligence-gathering efforts and also ignoring or controlling the street demonstrations. Similarly, Egypt arrested radicals accused of having links to those who organised the September 11 attack. As Arab regimes support the US, and as a substantial section of the Arab masses continues to demonstrate against Washington's attack on Afghanistan, the Arab world could be staring at a crisis not contemplated before September 11.