Scene: Programme studio at NDTV 24x7. An Election Special is on... 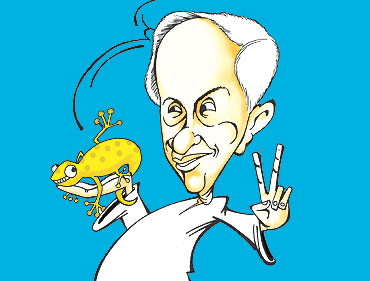 Prannoy Roy: No anti-incumbency. A secular mandate. The BJP gets a royal drubbing. But there is one more factor in the remarkable success of BJD’s Naveen Patnaik in the Orissa Lok Sabha and assembly polls. Call it the lizard factor—a lizard falling on the head of Naveen on the eve of the vote count. Ram, any historical links?

Ramachandra Guha: Not exactly, though way back in the 1952 polls, a scorpion bit the right hand of a Ganatantra Parishad candidate in Bhubaneshwar. He lost, of course, but there is no other precedent of a lizard falling on the head of a politician during the poll count.

Dorab: Prannoy, while lunching at a UP dhaba two days back, I saw three lizards on the walls, though their significance was lost on me. Now it seems they foretold the Congress’s success in UP!

Barkha: I did some fact-checking, Prannoy. The lizard fell on the right side of Naveen’s head—perhaps an indication that some day he would swing right, I mean towards the BJP, and not towards the Left.

Seshadri: This is where knowledge of Hindutva minutiae comes in handy. The lizard fell on the right side; according to our shastras, this indicates the benefit of ‘raja yoga’ to Patnaik. That is why his party did so well. But (in a sombre voice), some ‘panchangs’ say the occasion has an ominous portent—death! (Everyone present looks up anxiously at the ceiling.)

Jayanti Natarajan: I don’t want to sound flippant but if the above interpretation of ‘raja yoga’ was correct, the BJP thinktank, rather than labelling Dr Manmohan Singh as ‘weak’, should have caught some lizards and bunged them on Advaniji’s head. His prime ministerial dreams could have been fulfilled. But now it is too late.

Jay Panda: No, it is too early to say if we should change our symbol to the lizard. And I don’t know of any plans on the part of the Orissa government to perform a ‘Chipkali Yagna’, where 101 golden lizards would be offered to Brahmin priests.

Jayanti Natarajan: No one from Kandhamal, I hope.

Prannoy Roy: We have on the screen, the well-known entomologist from Australia, Dr Cockburn Roach. Sir, is there any significance in the fall of a lizard on the head of a politician?

Dr Roach: Rather interesting. A female lizard dropping on the right side of the head could indicate some kind of a mating instinct. But I need more time to study the actualities of the case.

Barkha: Prannoy, Naveen Patnaik just announced that lizards would be a protected species in Orissa from now on and that he will shortly sign a $20m MOU for starting a lizard park in Bhubaneshwar.

Sudhendra Kulkarni: Lucky lizards! I only wish one had fallen on Advaniji’s head.

Prannoy Roy: More to come but now it’s time for a Lizard Break!

The Epic Test Of 2009, In Little Twenty20 Capsules