After the forever dramatic Rakhi Sawant, it was the turn of the Princess Third Front to choose her partner... 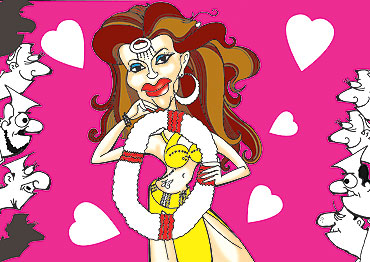 outlookindia.com
-0001-11-30T00:00:00+0553
"The Third Front has chief ministers, former chief ministers and also former prime ministers in its ranks and it would not be difficult to elect a PM."

In the Bharat that is India, the Swayamvar season is upon us. After the forever dramatic Rakhi Sawant announced she would organise a Swayamvar to choose a mate, the scene now shifts to a hall where Princess Third Front is poised to choose her partner from a distinguished assembly of kings, princes and stalwart warriors. The princess is taken around the hall by the patriarch, a sagely Sitaram Yechury, who describes the qualities of some of her would-be suitors.

Yechury: "O princess, these great heroes have travelled long distances from faraway nations to seek your hand. Look yonder, there is King Sharad Rao, from the Sugar Belt kingdom, renowned for his political acumen. To start with, he was not willing to come but was cajoled into attending. If you find his bearing peculiar, it is because he is sitting on a fence, a practice at which he’s an old hand. Should you accept him, he will offer nail-biting excitement in a game called cricket.

"Do condescend to turn this side, alluring princess. The Farmer King, Deve Gowda, is another important suitor. Though he rules in his kingdom of Karnataka, he is a man of the masses, eating only ‘ragi’ balls and ‘saaru’. You will have an easy time with him, he does not speak much and dozes most of the time. And aren’t you excited at the sight of Prince Naveen, a suitor with a comely Oxbridge accent who can coexist with all? Like the fabled fiddling of emperor Nero when flames consumed Rome, he played, and replayed, the opening bars of Beethoven’s Fifth (on the piano!) while Kandhamal burned. Through him, you’ll be introduced to elegant English life as well as the bleached bones in harsh Kalahandi, where only starvation rules. And who can ignore Prince Chandrababu from Hyderabad, who will smother you with the latest that Pentium offers, even if, God forbid, he is unable to feed you. But then, can computers be ignored in the new millennium? And yonder sits D. Raja; don’t be deceived by his earthy looks. He speaks for the masses, though his favourite word is a firm ‘nyet’ to overtures from Congress seductresses. Next to him sits the mighty intellectual, Prince Prakash Karat, steeped in ideology and love for the past. See how he is dressed in 18th century period costumes. Trying to wheedle him away from his rigid posture would be a challenge, even for you!

"Mighty princess, you are lucky to have such distinguished suitors. Choose well and plight your troth; you will not regret it."