'Top Leaders Must Be More Pragmatic'

A disastrous poll just over, Bengal's comrades are livid with Karat's gung-ho withdrawal 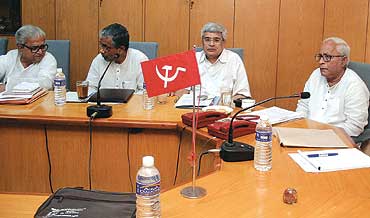 outlookindia.com
-0001-11-30T00:00:00+0553
CPI(M) general secretary Prakash Karat's stock is trading at very low levels among Bengal comrades these days. In fact, the decision to pull the plug on the UPA government has stirred off the first rumblings of discontent in the state unit. The criticism stems from a latent fear of facing the electorate (inevitable if the UPA loses the trust vote on July 22) at a time when the party is still reeling from the reverses in the recent panchayat/municipal polls.

Add to this the severe discomfiture of the Bengali Marxist at the prospect of being seen as colluding with the 'communal' BJP. Several state leaders have already obliquely criticised Karat and the ideologues at AKG Bhavan. As a senior CPI(M) MP lamented, "Karat and the others decide the party line in Delhi but they know nothing of realpolitik. They have never even contested a municipal poll. If early elections are forced on us, our tally will go down sharply. Then where will we have the numbers to influence national politics? The top leadership should be more pragmatic."

CPI(M) central committee member Hanan Mollah was among the many who told Outlook that voting with the BJP would alienate Muslim voters. State minority affairs minister Abdus Sattar, for one, is feeling the heat. "The Congress and Trinamool have launched a campaign in rural Bengal highlighting this and it'll be tough convincing our supporters that we didn't join hands with communal forces," he says.

The Bengal delegation will take up these issues and others at the party central committee meet on July 19-20. An open revolt may not happen, but it's certain that the party leadership is in for a hard time. As was evident from this statement from politburo member Benoy Konar, considered to be a hardliner himself: "If the leadership takes any wrong decision, it can be amended at the next central committee meeting. That's how our party functions."

It may all be mere sabre-rattling, but it's enough indication of the anger among Bengal's Marxists. Konar's comments make it clear that the pullout decision was a unilateral one. "This turn of events was unexpected. The last central committee did not decide on withdrawal of support and a post-pull-out scenario. We were sure we would be able to stop the deal," he says.

Others in the party accuse the CPI(M) general secretary of being politically naive. "He (Karat) gave us the impression that the Congress wouldn't proceed with the deal. A report at the end of the party congress at Coimbatore (March-end) also gave this impression—it said we've been able to successfully block the deal. It's now clear the politburo had no idea of the Congress's determination to go ahead or its plan to tie up with Mulayam's SP. We were not savvy enough to predict Congress intentions or its resolve," one politburo member told Outlook. You get as good as you give, the Marxist boss is certainly getting the thumbs down from some of his comrades.

All Hands On Deck