Top Her Up With Jatropha

With several commercial trials showing encouraging results, biodiesel may be the next big thing in fuel 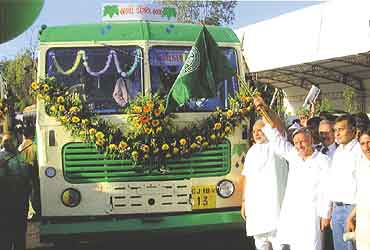 outlookindia.com
-0001-11-30T00:00:00+0553
This could be the beginning of another green revolution. Only, it won't be in agriculture. Instead, it has the potential to change the energy landscape of India, as well as other crude-deficient, yet oil-guzzling economies. Imagine buses, cars and superfast trains running on fuel extracted from plants. Welcome to the world of biodiesel, a natural fuel made from plant extracts. We're talking of living, growing ones—and not the fossilised ones that take millions of years to transform into crude.

Popular in developed nations like the US, Italy and Japan, its use is gaining momentum in India as several commercial trials have shown encouraging results. Leading oil PSUs like IOC and HPCL are experimenting with it in Mumbai and Haryana. And, hold your breath: German automaker Daimler Chrysler has also run its C-Class Mercedes Benz on it for over 6,000 km across India!

Biodiesel is a natural oil that's taken out of several non-edible oil-bearing plants. It undergoes organic and chemical processes to yield fatty acid esters, or a diesel-like product, which can be blended with normal diesel. Experts predict that, like ethanol, biodiesel can be used mixing it with anything.

In India, the focus is on a wild plant, Jatropha Curcas, which can grow in most places since it requires little water and fertiliser, can survive on infertile soils, and is not eaten by cattle. It's also pest-resistant and has a high-seed yield that continues to be produced for 30-40 years. The seeds are crucial here, for they have a high oil content of 35-40 per cent and the kernels an even higher 50-60 per cent. IOC's R&D wing at Faridabad, Haryana, is also exploring the possibilities of doping diesel with oil extracts from mahua, karanjia, sunflower and rapeseed.

IOC kickstarted its biodiesel pilot project by running 20 buses, owned by Haryana Roadways, in August last year. Last week, the Gujarat State Transport Corporation flagged off four buses using a five per cent biodiesel blend, between Ahmedabad and Gandhinagar. The Railways have run trials of biodiesel on superfast trains. The first trial was conducted in December '02 on the Shatabdi Express. Sources say the project is top priority for the Railways, which is the country's largest diesel consumer. Estimates show the Railways can save Rs 300-400 crore on its annual fuel bill of Rs 3,500 crore with the new fuel. To show its seriousness, the Railways have tied up with IOC to plant Jatropha in 500 hectares of land alongside its tracks. The land is being leased to IOC for 15 years.

Similarly, HPCL started another pilot project to test this new fuel, but based on extracts from karanjia and soyabean oil last year. It ran 25 best buses in Mumbai using a five per cent blend with normal diesel. This was increased to 10 per cent in December 2004 and in January 2005, to 20 per cent. Says Bharat Balan, DGM (alternate fuels), HPCL: "There were no engine or operational problems with the increased blend and we have achieved substantial reduction in smoke and particulate matter release." Daimler Chrysler has two Jatropha plantations in the sub-humid areas in Orissa and the semi-arid areas in Gujarat.

Both oil companies and auto firms are gung-ho about biodiesel. It enjoys several advantages over petroleum-based fuels, and holds the promise of solving India's fuel problems. Biodiesel, blended with petroleum diesel, has a low sulphur content, reduces unburnt hydrocarbons and produces less carbon monoxide and particulate matter. It is already Euro-IV compliant, even as India is gearing up to adopt Euro-III standards. And biodiesel could cost half of what normal diesel does. No one can deny that alternatives to petroleum-based fuels are important for countries like India, which imports 70 per cent of its current requirements. The Economic Survey 2003-04 states that the use of biodiesel, both as a 20 per cent blend and in its pure form, can reduce the country's crude import bill by 20 per cent.

Auto majors, too, are conducting their own research. Says a Daimler Chrysler official: "Our road tests in different climatic conditions and varied terrains indicate that biodiesel is a viable alternative to petro-diesel. Vehicle performance and drive characteristics have remained unaffected...while emission properties seem promising and positive. Our plantations are also providing us with inputs regarding CO2 binding and we are trying to improve the characteristics further." Once the model for such implementations is perfected, it plans to evaluate costs and establish specific revenue models. 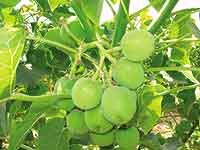 A UK-based company is also working with the Tamil Nadu Agricultural University to research Jatropha. The former has also proposes to plant Jatropha in Tamil Nadu, Madhya Pradesh, Rajasthan and Chhattisgarh. It is also in talks with a leading brewery company in northern India to start large-scale plantation.

Fortunately, the government is backing the new fuel. The ministry of petroleum and natural gas has got the Bureau of Indian Standards to lay down technical specifications that will pave the way for blending biodiesel with other fuels. Sources say it's likely to announce a comprehensive policy on biodiesel next month, which will include a roadmap for large-scale cultivation of Jatropha and other plants needed to produce biodiesel. A plan to deploy biodiesel commercially with the help of oil PSUs is also on the cards in the near future. The Planning Commission had recommended a national mission on biodiesel. According to it, local communities in Bastar in Chhattisgarh have been using this oil to run farm equipment and motorcycles for years.

Despite enthusiasm among private and public agencies, there remain a number of problems with biodiesel. A major hurdle is in its commercial production. The cost of oil procurement, storage, transportation and extraction accounts for a major proportion—and these can be high. It has technical limitations too. Its high viscosity makes it less useful at lower temperatures. For long-term storage in hot and humid conditions, extra costs have to be incurred to prevent bacterial growth. Since biodiesel degrades rubber, fuel filters may require frequent changes, hiking maintenance costs.

So will biodiesel prove viable for India? India's dependence on imported oil makes it imperative for policymakers to look at alternative fuels. And when there are over 50 million hectares of degraded wastelands and 34 million hectares of protected forest cover, which can be used to grow oil-bearing plants, the prospect of this green fuel seems attractive. India also needs to try out other variants, like ethanol—highly successful in Brazil.

Maybe it's time for Union petroleum minister Mani Shankar Aiyar to stop globe-trotting to lobby for cheaper crude, mutually beneficial ties with other nations like China, increased diplomatic relations with oil- and gas-rich countries like Iran and Russia, and buying strategic stakes in global fields; instead, it may be better if he concentrates on just a few home-grown, oil-bearing plants.