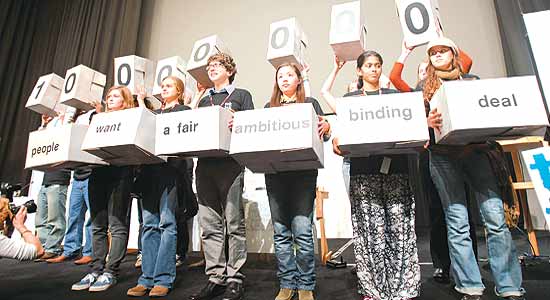 As the climate change jamboree kicked off on December 7, members of an Indian NGO were stopped from entering Bella Centre in Copenhagen, the venue of the UN summit that is currently the cynosure of the world. Reason: they were wearing outer shirts with a picture of Mahatma Gandhi and the slogan “Need, Not Greed”. Despite being warned against “making any political statement”, some promptly put the shirts back on again once they were let in. This kind of attitude is missing when one spies the Indian negotiating team, which appears “bewitched, bothered and bewildered”. Nothing, it seems, is going right. And ironically, all this has plenty to do with making political statements.

At the best of times, climate change is a  mind-numbingly complex topic with the usual mix of dense jargon and data, unbending positions and posturing. But in these opaque and long-drawn-out negotiations, suddenly many observers are now intently watching India’s moves. Reason: India is seen to have yielded considerable ground right at the start of the negotiations by voluntarily committing to reduce the carbon intensity, the amount of carbon dioxide emitted per unit of GDP, by 20-25 per cent by 2020. Given that this step was taken without any quid pro quo from the rich countries (aka the big polluters), it has cast a cloud of confusion on India’s stand at the summit.