Too Much Iron In the Diet...

Bail denial is itself a form of punishment. ‘Tangible’ justice? Or presumption of guilt? 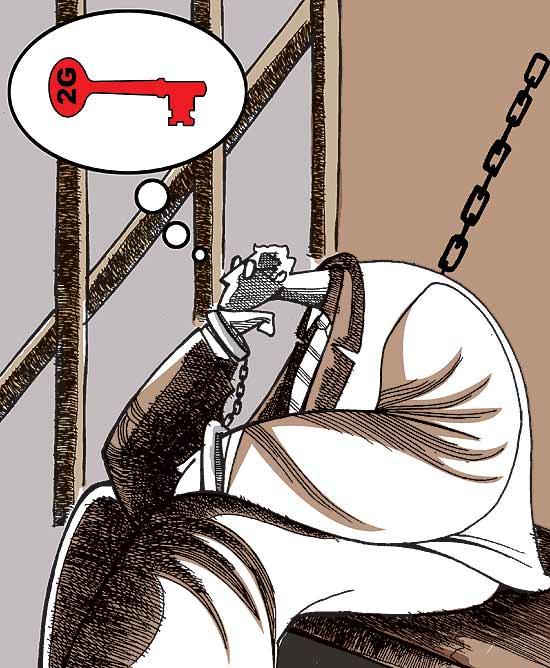 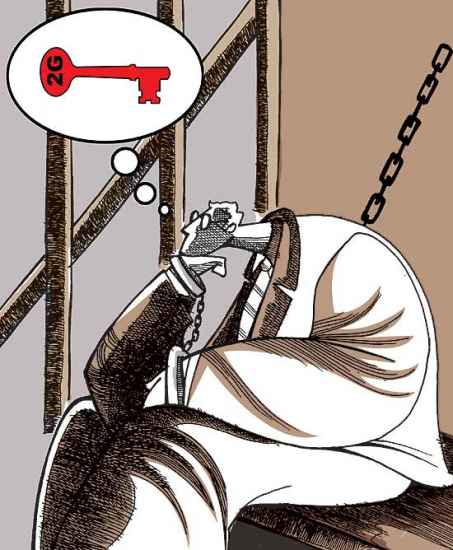 Why Bail For 2G Accused?

“When Krishna Iyer said ‘bail not jail’, it was in the context of the poor people—adivasis, Dalits, the destitute—who are victims of the criminal justice system. How can the same rule apply to manipulators of the system who will interfere with the investigation if freed?”

“Krishna Iyer never said ‘bail not jail’ was only for the poor, not the rich.”

—Criminal lawyer Rebecca John, who appears for Sanjay Chandra, one of the businessmen jailed in the 2G scam

The poor have always known that bail is not just about the law but the larger politics around it. In this age of high-profile trials for economic crimes, conducted under the arclights of media, public and Supreme Court attention, the rich are discovering that too. When the time comes to look back on 2011, it will probably be remembered as the Year of Arrests. More than any other case, the gargantuan 2G spectrum case has contributed to giving it this distinction. It has seen 14 people—the DMK’s A. Raja and Kanimozhi, assorted officials and businessmen—arrested and jailed.

For a public disgusted with corruption, the footage on their TV screens of tangible images of graft—well-dressed, wealthy people with tense expressions journeying from prison to courtroom—has provided visual relief. To see them denied bail by the courts—some have been in prison for eight months now—has provided a sense of justice delivered, at least in the here and now.

“Were these people to be given bail and released from prison, there would be a sense of emptiness and loss,” observes ad professional and columnist Santosh Desai. “The 2G case is illustrative of the larger way in which (denial of) bail is used in India—as an advance instalment of punishment, as a substitute for a durable form of justice.”

To the writers of legal textbooks, that would probably sound like an ironic reversal of the “presumption of innocence” principle that underpins the mechanism of bail; i.e. that no one should be deprived of their liberty, without good reason, until proven guilty. But it’s instructive of the public mood that even a human rights lawyer like Colin Gonsalves feels such principles “are just cliches in the context of bail”, and points out, “when high-level crooks are caught and released in 15-20 days, justice is not seen to be done”.

Anti-corruption crusader and Supreme Court lawyer Prashant Bhushan offers a rather more sophisticated argument for locking up those accused of defrauding the exchequer: “Such white-collar crimes should be taken as seriously as terrorism, rape and murder, they should be on par. One doesn’t realise the effects of acts of corruption, but if you look at the figures in the 2G case, effectively half a million people may have been sentenced to death by being deprived of public healthcare. A terrorist or person accused of murder does not get bail unless the case is weak.”

If crusaders liken fraud to mass murder and judges accept the repeated opposing of bail pleas by investigators, is it possible to question the prolonged jailing of the accused in what has been the country’s biggest scam?

Apparently yes, though until this week’s controversy (in which the Supreme Court took strong exception to Union law minister Salman Khurshid’s comment, “If you lock up top businessmen, will investment come?”), it has mostly happened in a muted way. As the incarceration has dragged on, disquiet has been expressed—and not just by defence counsel or politicians with political obligations to fulfil—at the gap between the judiciary’s recent stances and the liberal “bail not jail” jurisprudence articulated since the ’70s by V.R. Krishna Iyer and a succession of other Supreme Court judges.

Indeed, political analyst Pratap Bhanu Mehta wrote a few weeks ago, “The court’s attitude on the denial of bail to the 2G accused at various levels has less the imprimatur of the rule of law. It seems to be borne out of a fear that its legitimacy will be immediately questioned in this atmosphere that recognises no shades of grey....”

Within the legal community too, unease has been surfacing. Bail hinges to a large extent on judicial discretion, judges having to weigh many factors specific to each case. That makes it tricky to critique. Yet, there are murmurs, growing louder by the day, that economic crimes are in a different category from terrorism and that bail denial should not be routinised.

“With the chargesheet filed as long back as April, and a long trial likely in the 2G case, is it fair to keep people in jail on what seem like bald, non-specific grounds that they are powerful and may tamper with evidence?” asks Rakesh Shukla, Supreme Court lawyer and author of Bail Not Jail: A Handbook on Bail. “These are routine allegations used to deny bail, the court should accept them only if they are very, very specific. Otherwise, the very process becomes the punishment. Bail is much larger than who these people are, and what they might have done. It involves principles of life and liberty.”

Many lawyers point out that stringent conditions can be imposed on the accused to address concerns on tampering. Some argue that by no means can all the accused be considered uniformly powerful and there should be a case-by- case assessment. Even Bhushan agrees that in the matter of bail, there should be such differentiation, both with regard to power to thwart the investigation and the nature of charges.

In denying bail, courts have also tended to cite “the gravity of the offence”—the loss of around Rs 30,000 crore to the exchequer. Indeed, the Delhi High Court went so far as to say “the gravity of the offence itself is sufficient to deny bail to the petitioners”. Comments a senior Supreme Court advocate who did not wish to be named, “The figures are ad hoc, the actual loss in the case is still not established, and it will only be possible to establish it during trial. Denying liberty only on the basis of such figures doesn’t seem tenable. We are going farther and farther away from the well-settled parameters for bail as it is traditionally understood.”

For lawyers who have seen intractable approaches to bail close-up—in their work with suspected terrorists, “Maoists” and the poor—there is some irony in the focus on those jailed in corruption trials. “It’s interesting to see the media interest in these issues when big names are involved,” says human rights lawyer Vrinda Grover. However, she rejects a rich-poor view on the case, saying, “Whether it’s a Naxalite, policeman or rich man, they all deserve equal protection under the law. If anyone’s investigation is completed, let them have bail.” She is concerned too about the message that high-profile trials send down the line. “The message to the justice system is don’t give bail, keep people in jail.”

For others, too, there are concerns flowing from this. As a lawyer put it, “This is no doubt a unique case that has shaken the nation, but hard cases shouldn’t make bad law. We may reach a stage when a long spell of incarceration for an undertrial in an economic offences case may not look alarming anymore.”

Clearly, there is more than one way in which corruption can take a toll.