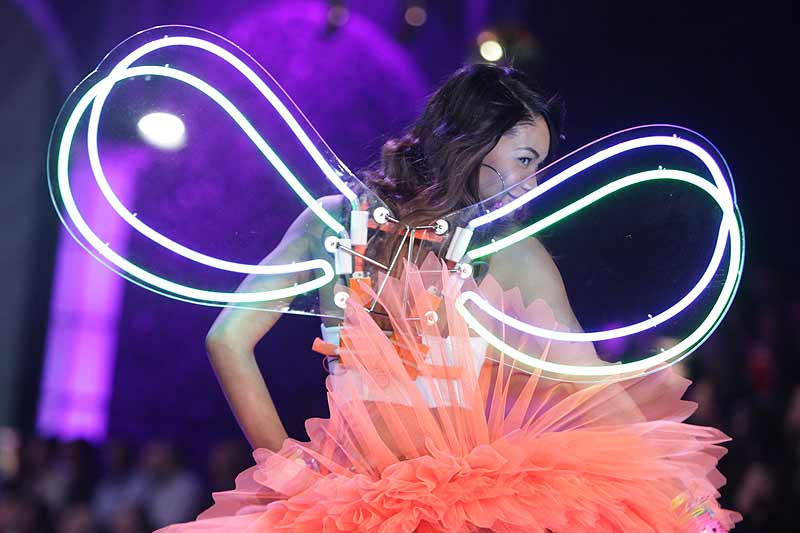 Erin Baiano (From Outlook in collaboration with The New York Times January 2013)
Suzy Menkes January 07, 2013 00:00 IST Too Many Threads

It is 2013 and a posse of models is wheeling a giant birthday cake down the runway at Chanel. It celebrates with 30 flaming candles the years that Karl Lagerfeld has ruled over the iconic Parisian house.

There are two reasons why that scenario would never happen. First, Lagerfeld is about the last person to look back or to vaunt his past achievements. His eyes and mind are fixed steadfastly on the future. Also, this most intelligent and cultured of designers knows the unpalatable truth: that a brand wants to celebrate its own heritage—not to applaud a transient designer, even if that faithful person has worked for the label for three decades.

A new, commodified attitude reigns in the once-genteel world of high fashion.

Loyalty, discretion and respect for the artistic temperament of designers are values that have all but disappeared now that the concept of each fashion house as a “family” has mostly vanished. Instead, there is a cut-throat, market-driven industry, with mutual distrust rife between fashion houses, their chief executives and—yes—their designers. And, in this new atmosphere, creatives and managers alike find themselves in difficult positions.

Faced with the near-impossible task of churning out eight or more collections a year, designers have to submit their once cast-iron authority and control to a “team”. And however good the relationship, the executives have to bow to the pressure to produce.

The result is that designers today are no longer the heart and soul of their brands. They have become chattels to be hired and fired—and can even find themselves cast out of the house that bears their name.

There are exceptions: At Lanvin, for example, the designer Alber Elbaz seems to have a fruitful relationship with the brand’s owner, Shaw-Lan Wang, a Chinese publisher who has allowed her protege to develop at his own pace over the past decade. 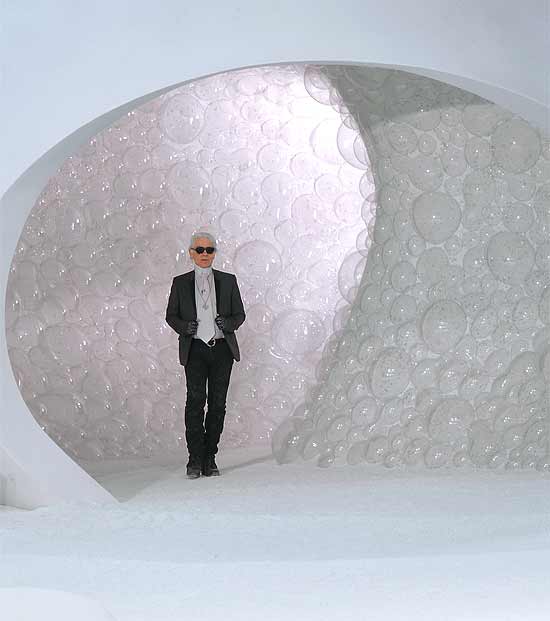 Karl Lagerfeld ruled Chanel for 30 years. (Photograph by Valerio Mezzanotti, From Outlook in collaboration with The New York Times January 2013)

But the overall message for this new millennium is clear as day: the creator is for now, the brand is forever. And as more brand birthdays come up—Moncler and its puffy jackets is celebrating its 60th at Art Basel in December—these timeline moments become increasingly focused on history and heritage.

Faced with the near-impossible task of churning out eight or more collections a year, designers have to submit their once iron-cast authority, control to a “team” now.

The big conglomerates and global investors know that, while within the fashion world the designer Christopher Bailey is synonymous with Burberry, and Lagerfeld is absolutely identified with Chanel, this is unlikely to be the case in emerging markets. In the Far East—especially China—marketing is constructed pretty much around the brand name. The name Salvatore Ferragamo draws interest—even though the famous shoemaker died more than half a century ago. The focus is never going to be on Massimiliano Giornetti, the company’s current artistic director, who has worked for Ferragamo for the past 12 years.

Designers are now seen as commodities, brought in with some pomp to revive flailing houses and to be disposed of when a fresher name comes along. The most appropriate analogy might be with professional sports, where players are bought and sold regardless of their country of origin.

Is it wise to treat creative people—essentially artistes with cloth—as commodities?

The case of John Galliano, who devoted some of the best years of his fashion life to Christian Dior (while his own LVMH-backed brand was treated more as a “danseuse”, or plaything), started off a round of soul-searching in the high-fashion universe. Under intense pressure to produce at least eight full collections a year, Galliano—like so many other artistes—reached for sustenance and oblivion. In court for unpardonable anti-Semitic remarks, which cost him his job at Dior in 2011, the designer admitted to alcohol abuse.

Within the fashion world, there are many other open secrets about drug and alcohol addiction. Without the support of a “family”—actual or composed of loyal friends—the designers are sent off to rehab or may just quietly leave. Those who do stay the course find their creative time whittled down by the need to perform at those international trunk shows, global gala events and museum displays. And they are now asked to connect with fans (read: potential customers) via Twitter and Facebook.

Leading designers demand or request to be in control of advertising and image. Yet the truth is that however much they try to keep control, there are likely to be racks of small leather goods churned out for duty-free shops in the brand’s name. And even if the designer wants to focus on clothing, the company is more interested in the lucrative handbag market.

The sense of distrust and fear of being discarded is in actuality a two-way problem, and there is a reason for corporate masters to be wary of identifying the brand via its current designer. He or she might be lured away by promises of money or an investment to launch an own-label brand.

That is what happened in 2001, when Alexander McQueen was plucked from Givenchy after five years with the brand owned by the luxury group LVMH Moet Hennessy Louis Vuitton. He then joined a rival luxury company, PPR, which helped him develop his own business. But then, Balenciaga (owned by PPR, which also has in its stable Gucci and Yves Saint Laurent) is facing its own upheaval this winter, as the designer Nicolas Ghesquiere separates from the brand with which he has been so closely identified since 1997 (at least within the fashion universe).

As the heads of the famous 20th-century fashion houses retired or passed away, brands like Chanel, Dior and Valentino have had to morph into corporate employers looking out for the most powerful designer currently on offer in order to enhance their image.

The change did indeed start with Chanel three decades ago, when Lagerfeld and his success became the template for all the many designers who subsequently took over dusty houses and attempted a spring cleaning. In truth, there have been almost as many flops as success stories. For example, the house of Emanuel Ungaro has had a run of designers (yet another new one starts next season) since the founding father of the company retired in 2005. 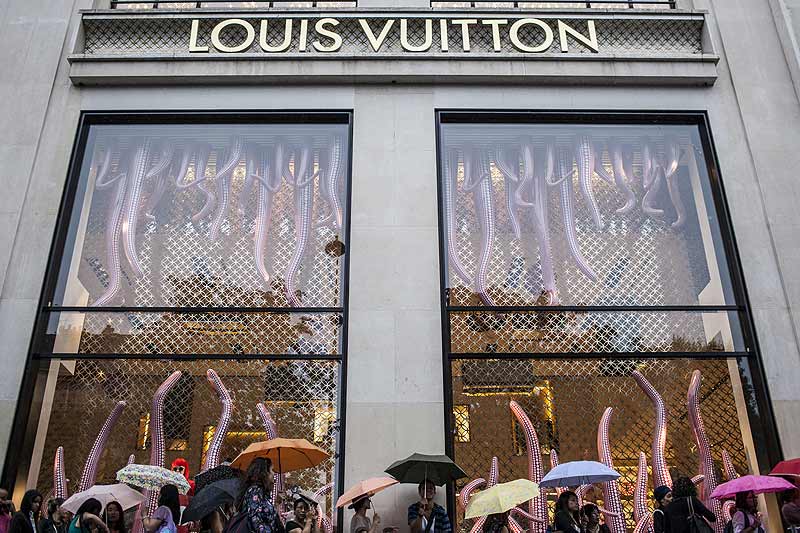 Louis Vuitton, ‘cash cow’ of the luxury market. (Photograph by Mathieu Willcocks, From Outlook in collaboration with The New York Times January 2013)

There is no guarantee that he, or any other designer behind a big brand, will stay indefinitely. In the past, long-serving fashion supporters—like Pierre Berge at Yves Saint Laurent and Giancarlo Giammetti at Valentino—were often partners in life as well as in business.

Now, executives at LVMH or PPR are more likely to come from product management. From 2004 to 2011, Gucci Group had as president and chief executive Robert Polet, who was dubbed “the ice-cream man” after arriving from Unilever’s frozen foods division.

At Louis Vuitton, known as the “cash cow” of the luxury market, it was announced that at the end of 2012 Yves Carcelle, an executive who had led LV since 1990, would be replaced by the Spaniard Jordi Constans. The latter is a former executive vice-president of fresh dairy products at Groupe Danone, and has already been dubbed “the yoghurt man”.

This tendency for fashion brands to hire from the consumer goods industry suggests that luxury companies are hoping to follow the rapid expansion into emerging markets of groups like Danone, Procter & Gamble and Unilever over the past two decades.

It is easy to understand the logic of this change: out go executives with an intimate and hands-on understanding of the product; in come those with a demonstrable grasp of global marketing. For today, distribution, supply and efficient delivery—not to mention the management of e-commerce and digital promotion—have become at least as important as an appreciation of design or a feel for luxury.

If the catalyst for change and for the soul-searching that followed was the departure of John Galliano at Christian Dior, the long deliberation over a new designer was a test case for evolving attitudes.

After endless speculation through 2012 and a period of reflection at the house of Dior, the Belgian designer Raf Simons was selected. This appointment was a neat example of the new commodified attitude. Simons had been pushed out at Jil Sander in the spring of 2012 to make room for the return of the eponymous designer. She had departed and returned three times to the brand she originally founded in 1967, but lost executive control of.

The game of musical chairs continued throughout 2012 with Hedi Slimane, once a much-applauded designer for Dior Homme, taking over at Yves Saint Laurent, where his career had started. Stefano Pilati, who had been creative director at YSL since 2004, went on to join Ermenegildo Zegna, the Italian luxury menswear brand.

Does anyone outside the immediate fashion world and its ever-widening circle of bloggers and Twitter feeders really care about these internal changes or register the pressure to perform that is put on current designers?

Those connected to fine art are quick to say that the same attitudes are prevalent in the art world: creative people are put under savage pressure to produce for a fixed-date show; artistes are obliged to be global ambassadors; a studio team mass-assembles product in the spirit of the creator.

In fact, fashion itself, once an elitist pleasure, has become a commodity, whether as cheap clothing or as entertainment via celebrity red-carpet dressing and museum-style displays.

Yet something has been lost in the fashion universe, as cynicism has replaced innocent enthusiasm.

Designers now know their worth and demand to be paid handsomely. Whereas Paul Poiret, a fashion purveyor of extravagant and exotic glamour almost exactly a century ago, was reckless with his money, had no notion of brand-building and died a pauper in 1944, designers today use high-level legal teams to ensure that they are given water-tight contracts. They get first-class treatment, from airplanes to limousines. They own fine homes and art collections.

A luxurious lifestyle is what the designers earn—and maybe deserve—for dancing to the beat of their corporate employers, for hopping on a plane for a brand promotion without having the chance to absorb the country’s culture.

For some, the high-octane performance may be stimulating. For others, it is a crushing burden. Let’s hope that the commodification of this decorative art form that we call fashion does not exact too high a price in the end.

The Mind As Open Source Program