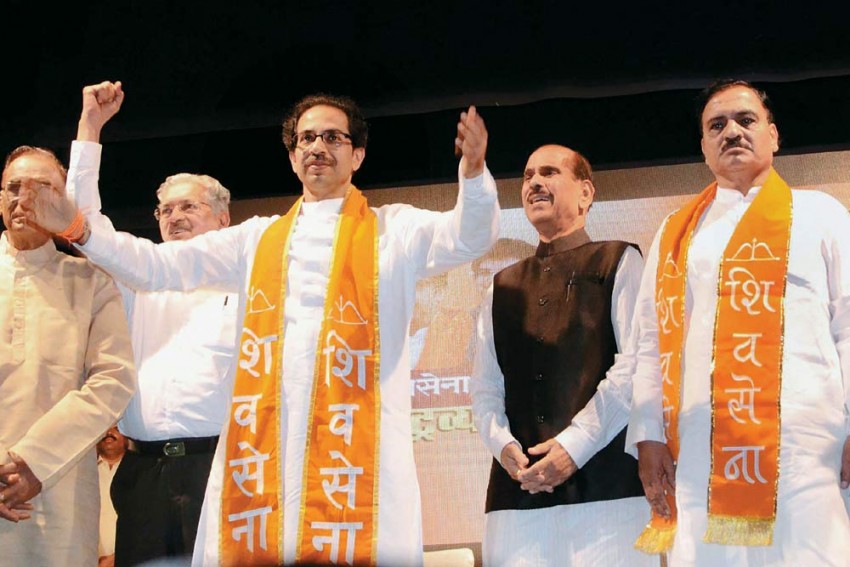 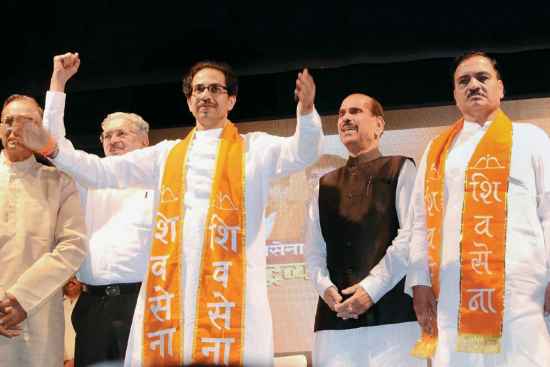 The BJP, on its part, denies any sug­g­estion of an “insult” by the lead­e­r­ship. Rajiv Pratap Rudy, general sec­retary in charge of Maharashtra, admits the local press has been making much of the recent BJP-Sena seat squabbles, saying the latter has been “taken for granted” and been “sidelined”. But he points out that Shah went to Matoshree without a formal invitation, paid tributes at the samadhi of Bal Thackeray and his wife, and spoke to Uddhav on the phone.

At the time of going to press, the all­iance was teetering between make-up and break-up, with the former a hair’s breadth ahead, if only bec­ause all players concerned, incl­uding the smaller allies, know that the Congress-NCP is on the mat and an election victory is theirs for the taking. The drama of the smaller parties (Raju Shetti’s Swab­hi­man Shetkari Sangathan, the rsp led by Mahadeo Janker and the Shivsangram) walking out over the paltry seven seats offered to them and later coming back after being “mollified” by Uddhav—along with Ramdas Athawale’s RPI—only ser­ved to magnify the tensions in the alliance. 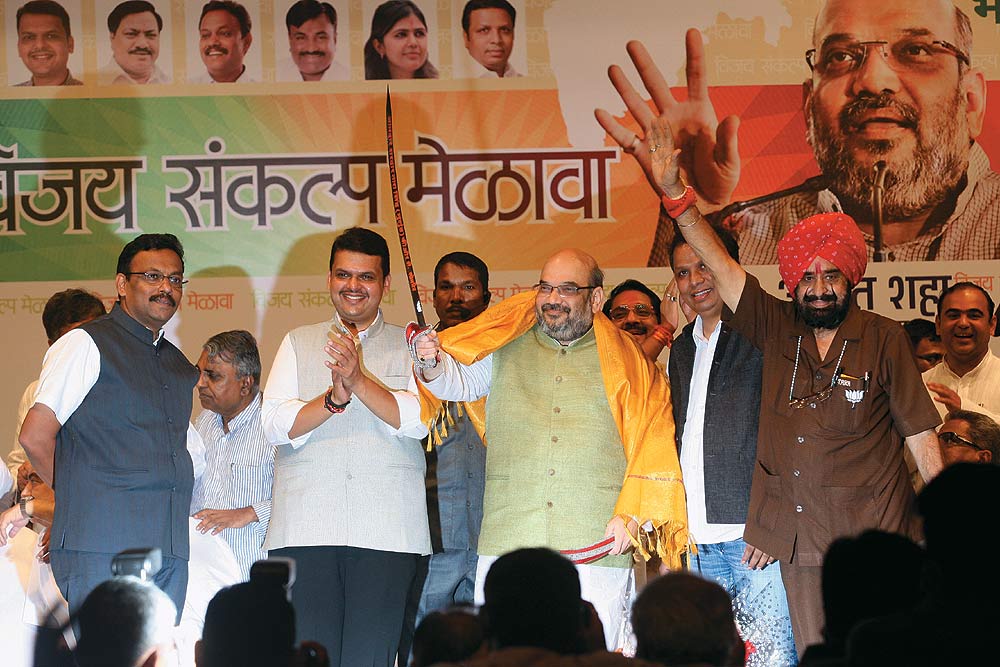 Now if by some catastrophe ties should break down, it will have to be said that the new BJP dispensation led by Amit Shah has notched up another setback. Wrong strategy, wrong candidates and overconfidence saw it squ­a­nder its gains in the Uttar Pradesh byelections. Now, under Shah’s leadership, could the BJP lose out on its equation with its oldest ally, one with which it has been in a steady partnership for a quarter of a century?

The Modi-Shah duo have not done the mollycoddling the Sena is used to. Matoshree is not even their first port of call.

Certainly, the Modi-Shah duo have not done the mollycoddling the Sena has been used to. For years, it was the late Pramod Mahajan, critical in the BJP’s growth and evolution, who would visit Bal Thackeray at Matosh­ree and soothe any ruffled feathers. After his death, it was Gopinath Munde, L.K. Advani and Sushma Swaraj who kept up the courtesies with the Thackerays. Today, there is no state-level leader in the BJP with a warm equation with the Sena first family (Nitin Gadkari is said to have a “soft corner” for Raj Thack­eray), while those who could have broken the ice in the national lea­der­­ship don’t have much of a say now. (It may be recalled that when Modi’s name was mooted as PM candidate, the Sena had suggested Sushma Swaraj.)

In Balasaheb’s days, a visiting BJP leader first went to Matoshree and then went about the party’s business. Now Amit Shah first meets his party workers and then goes to the Thac­ke­ray residence. On his first visit to Mumbai after becoming president, he did not even go there. Modi too has never had warm ties with the Thacke­rays and did not even attend the funeral of Bal Thackeray.

In the post-Bal Thackeray era, son Uddhav was fortunate to be at the helm when the Sena had its best ever performance in the LS polls, winning 18 seats while each of the 10 candidates put up by his bete noire Raj lost their deposits. With the self-styled Marathi hero suddenly becoming zero, Uddhav has greater room for manoeuvre. BJP leaders say posters have been up in Mumbai for several weeks saying Uddhav would lead and fight 151 seats. (The trust deficit between the BJP and Sena today is also due to the Modi-Shah duo having been perceived as pro-Raj at one point.)

Yet the BJP national leadership and the RSS want the alliance with a party sharing its ideological inclinations to continue. A week into the wrangling for seats, Rudy told Outlook: “We are all very keen for the alliance to work but it’s up to the Sena to be reasonable.” Sources in Delhi say that Modi is personally keen to keep the boat afloat and, if the alliance fails, it will be in spite of him reaching out to Uddhav. That would then imply that the Sena chief at some level did not want to be in an alliance with a resurgent BJP and set impossible terms to get out of it.

Sources in the Maharashtra BJP do say that a section in the state unit has been keen on breaking off the alliance and fighting the election alone, as it felt that “this is perhaps our only chance to ever have a BJP CM in the state”. Buoyed by the party’s performance in Maharashtra in the Lok Sabha elections, state leaders say they are “not willing to miss this golden opportunity”. Traditionally, in Maharashtra the BJP-Sena have always worked on a formula that ensured more seats for the BJP in the Lok Sabha polls with a smaller share for Sena, while it would be the reverse in the assembly polls. Going by that pact, five years back, the BJP contested only on 119 seats while the Sena fought on 169 seats. This time, however, both would like the CM’s chair as there is little doubt the current Congress-NCP regime will be defeated. 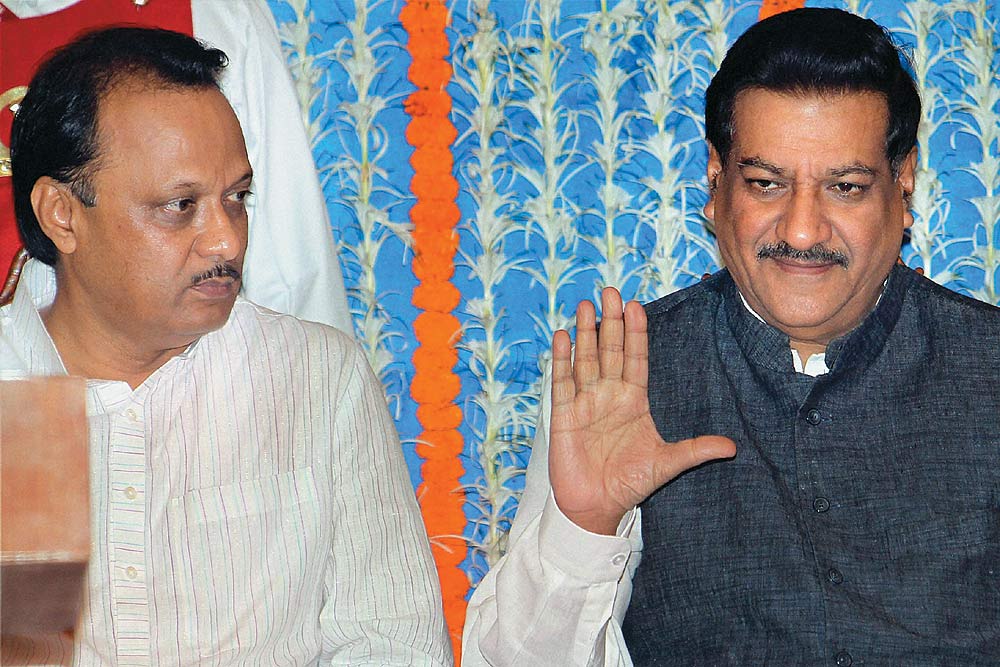 That said, there are many compulsions in the BJP to save the alliance. First, in the NDA, the BJP-Sena alliance (much like the alliance with the Akalis in Punjab) is much closer than coalitions guided by caste and religion maths. That’s the reason why the RSS insisted that the 25-year-old partnership be retained. An RSS pracharak exp­lained, “The BJP must not look like a party that ditches its old friends and allies. Especially after its poor performance in the UP bypolls.”

“The BJP must not look like a party which ditches old friends, especially after the poor show in the Uttar Pradesh bypolls.”

Party leaders also confirm that there are worries that after the UP debacle, were the Sena to break with them, there could be a ripple effect on other allies. It may for instance reinforce to partners like the TDP’s Chadrababu Naidu and LJP’s Ram Vilas Paswan that they should be wary of the BJP’s gameplan in the states. Simultaneously, it could also repel other potential allies. The image and message of how it deals with smaller parties is critical for the BJP as it enters a fresh election season in Haryana, J&K, Jharkh­and and then Bihar.

Also should they fall apart, then the campaign vitriol could get bitter. That too would not suit a BJP which needs the support of the Sena’s 18 MPs in Parliament. Finally, it would serve the NDA’s Rajya Sabha ambitions well were the all­i­ance to contest jointly, something that is expec­ted to see them sweep the state. This would then make it possible for them to eventually get more MPs in the upper house that is still a roadblock to the Modi regime.

Despite internal surveys showing a spe­ctacular performance for the BJP in Maharashtra, there is also wariness over seeking new alliance partners. Many in the party believe that in spite of all the noises being made by the Sena, Uddhav is a more moderate partner than Raj. The latter, who is prone to making compulsive statements against north Indian mig­rants, would surely be a liability when the BJP gets ready for battle in Bihar. D.P. Tripathi of the NCP also confirms that the fate of the Shiv Sena-BJP alliance would tend to have an outc­ome on the other side, where the Con­gress-NCP are struggling to stay together. This means that both Sena and BJP could get into formal or informal arrangements with the NCP, were their alliance to fail.

It’s a reflection on the pitiable state of the Congress that all focus is on the bre­aking or making of the Sena-BJP all­iance. Most have already forgotten that the grand old party has ruled the state except for two interruptions: the first, a short-lived regime of Sharad Pawar from July 18, 1978 to February 17, 1980, at the head of what was called the Progressive Democratic Front (which led to the only instance of President’s rule in the state). The other interruption to Congress rule came in 1995 when the Shiv Sena-BJP alliance won and comple­ted a full term in office. Now it seems no one is giving them a chance even as the others jockey and position, fight and fall apart for the tantalising loaves and fishes of office.

By Saba Naqvi in Delhi and Prarthna Gahilote in Mumbai

Yogi To The Marketeer