Too Many Ducks In This Li'l Pond 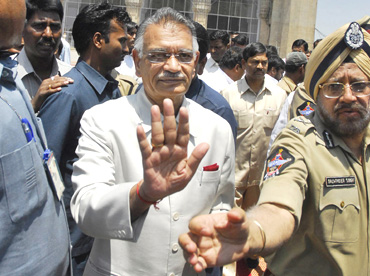 outlookindia.com
-0001-11-30T00:00:00+0553
For a party in power, the good governance ticket could be as valuable as a strong organisation, charismatic leadership and a clear ideology in winning the next election. But with Prime Minister Manmohan Singh's hoped-for main achievement—the Indo-US nuclear deal—going into cold storage, is the government beginning to look like a loser too?

Indeed, if there is a sense of hopelessness in the party, sources close to Sonia seem to be worried that the Manmohan Singh-led government already appears to have gone into lameduck mode. They told Outlook, "Even if the Indo-US nuclear deal is on hold, it's not the end of the world. If for nothing else, it is important that Manmohan Singh do something so that his prime ministership is remembered. That would also help the party."

Apart from a desperate need to do some image-building for the government, could a cabinet reshuffle help? There is public approval—at least of the middle classes—for the way the economy is being run, with finance minister P. Chidambaram and industry minister Kamal Nath sharing the kudos. But the upa government does appear to need a new Union home minister, especially if the bjp makes internal security a key electoral plank in the next elections, as looks likely. But despite criticism of Shivraj Patil over the last three-and-a-half years, it does not appear that he will be changed—his ability to soothe ruffled feathers and a general air of unflappability is cited by Congressmen as great virtues! Just as talk of shifting Union hrd minister Arjun Singh—now in poor health—is still just talk.

The prime minister has spoken many times in the past of inducting some of the younger MPs into government. But that too looks like a non-starter for the moment. As a key minister put it, "It's rather late in the day to make these changes—and an MoS has very few opportunities to perform. On the other hand, such appointments raise expectations among the electorate—it could be counterproductive."

The rot seems to have set in.

No Magic In These Wands