It’s inevitable for Tendulkar to be sized up against Bradman’s achievements. But they are geniuses of two different times. 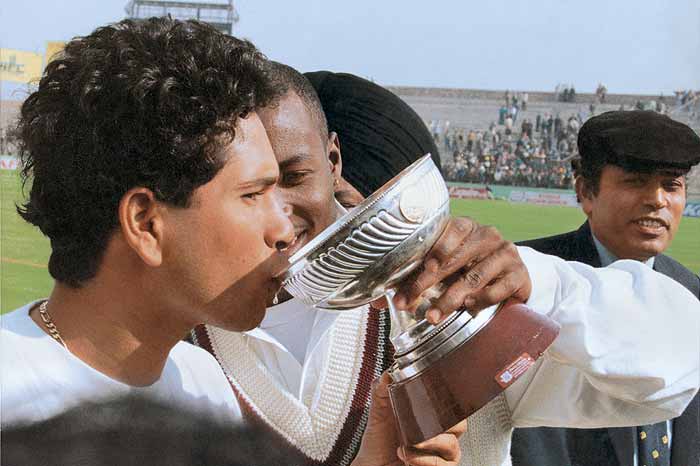 A salute to Sachin Tendulkar provided a welcome distraction from the unedifying sledging debate which lowered the tone of the Ashes contest as it headed for rarefied air on the eve of the Boxing Day Test match. And, inevitably, Sachin’s achievement in scoring his 50th Test match century prompted another series of comparative studies and analyses with Don Bradman, and begs the question whether this modern master may even be the greatest batsman of all time.

There was a time when such a claim would have been considered intemperate—even blasphemous. But no longer. After all, Bradman admired the way Tendulkar plays, believing he could see something of himself in the little master’s technique and temperament.

Tendulkar, the most self-effacing of men, is flattered, but deeply embarrassed by comparisons with Bradman. He is of the opinion that there can be no argument, as Bradman possesses the most fantastic statistic in cricket if not in all sport—a Test batting average of 99.94.

Of course, this is indisputable. Certainly, Bradman had the added challenge of uncovered wickets, but the fact remains that his 52 Test matches were played on 10 grounds in eight cities in Australia and England.

If you haven’t seen Bradman bat and rightly regret it, you must be grateful for being able to see Sachin bat. It’s a privilege.

Conversely, Tendulkar has been exposed to the most disparate ethnic, cultural, pitch, weather, crowd and playing conditions on 59 grounds in 52 cities in 14 countries (when you recognise the sovereignty of the countries comprising the West Indian cricket community). And he is averaging 56.91 after 175 appearances over 21 years—longer than Bradman spent in the Test arena.

Over the years, his most ardent admirers have often wondered how Bradman would have managed the complexities and demands of the contemporary game. Bradman himself relished the thought, but cheekily observed that his average may have suffered slightly, given that he was a much older man. While lost in such reverie, it is worth considering what Tendulkar would have achieved in the simpler and unhurried times of yore. Although it is the basic instinct of the game’s devotee to read, research, analyse and compare, on this occasion, more is to be gained simply by giving thanks.

Certainly those who regret not seeing Bradman at the crease should acknowledge the honour and pleasure of seeing Tendulkar. For it truly is a privilege. As his contemporary and friend, Brian Lara, happily observed: “Sachin is a genius, I’m a mere mortal.”

If the gods in the Hindu pantheon continue to look kindly upon him, Tendulkar will be in Australia this time next year on his fifth visit for Test matches. He was first here as a teenager in 1991-92, five years before the creation of the Border-Gavaskar Trophy, the shining prize for Indo-Australian competition.

And the excitement of his return will far outweigh the embarrassment of the critics—your scribe included—who wrote emotional valedictories to him three years ago, when he was accorded standing ovations wherever he played.

His third hundred at the Sydney Cricket Ground—Bradman’s favourite place, as it happens—in the first week of 2008 was his 38th. It is staggering that subsequently, he has scored 12 more—seven this calendar year, three of these since entering his 38th year in April.

Aussie crowds rarely take an outsider to their hearts. They did it for Worrell, Gower, and now for Sachin.

Little wonder Time magazine named him among its 100 Most Important People in the World in May and noted: “Sports heroes such as Tendulkar stand for national dignity in a way that perhaps only a post-colonial national can understand and feel grateful for.”

Generally, Australian cricket crowds are unforgiving, unsettlingly patriotic and fiercely protective of their own. But occasionally, they take an outsider to their hearts and rejoice in his success. Fifty years ago, at a critical moment in the evolution of Test cricket, they made an emotional connection with Frank Worrell, the charismatic statesman and first black man to captain the West Indies outside the Caribbean.

Twenty years later, they unselfconsciously embraced youthful Englishman David Gower, whose exquisite batting and thrilling fielding brought a new and wonderful dimension to the game. Those aged over 50, the age-group which remains most enamoured with the game in Australia, still talk of Worrell and Gower with great affection. Such memories can sustain. 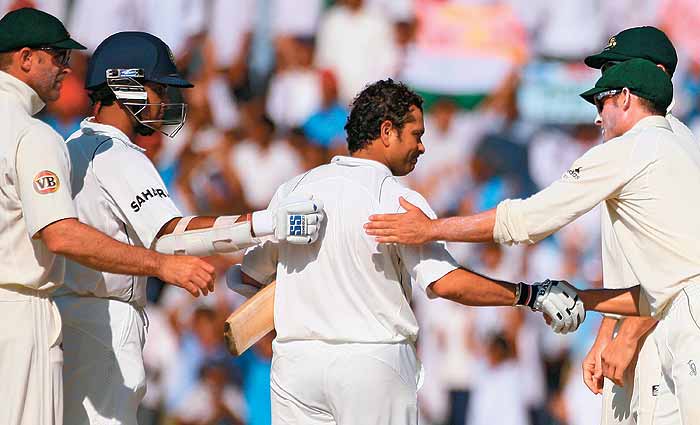 For the past 20 years, it has been the indomitable Tendulkar who has captured the imagination. While crowds have thrilled to his batting—he has scored 11 Test centuries against Australia—he is also admired for his modesty and gentle demeanour and for so resolutely carrying the hopes of a nation of more than a billion people with a deep passion for cricket.

While it may never be definitively known what Bradman and Tendulkar spoke about at their only meeting at Adelaide in 1998, one fancies that the strain of life in the public eye and the curse of publicity may have taken precedence over matters of technique.

Bradman’s dislike of publicity increased with every passing year, and as he became more obsessive about his private life, his distrust of the media bordered on contempt. Tendulkar has somehow managed to cope with the intrusiveness of the forever burgeoning Indian media and has remained open and accessible despite being the most worshipped cricketer in the world.

What is known is that Tendulkar rejoiced at the opportunity to spend time with Bradman, who is revered in India despite only once stepping foot in the country—in 1953, when the plane carrying him to England to cover the Ashes for England’s Daily Mail refuelled at the Dum Dum airport in Calcutta.

In the music room of Tendulkar’s home in Bandra West, Mumbai, a photograph takes pride of place. It is an image of Tendulkar with Bradman taken in the family room of the Bradman home at Holden Avenue, Kensington Park, in Adelaide.

Sachin Ramesh Tendulkar, a change-of-life child who has been kissed by the gods, will enjoy returning to Australia, where for a few weeks he can live with a greater sense of freedom. And he will be welcomed back with open arms.

The writer is an Australian cricket journalist

Figures, But Only Of Speech