Saurav's lambs made the impossible possible at Lord's. Is this the Dream XI for South Africa? 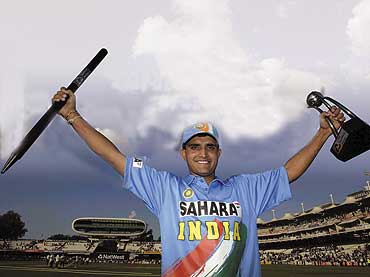 outlookindia.com
-0001-11-30T00:00:00+0553
It was the same dressing room balcony at Lord's where Kapil Dev had held aloft the Prudential World Cup 19 years and 18 days ago to create Indian cricket's most memorable image. But this time, it was Saurav Ganguly, lockets and talismans jangling on his bare chest, waving his shirt over his head and screaming in savage glee: a sight that will stay with cricket fans for years to come. "A shirt-waving Ganguly mouthing what I assume are pleasant words in some Indian language signalled to the cricketing world that India has arrived!" says former South African spinner Pat Symcox.

The most hated Indian cricketer not so long ago, by his own admission, the man branded the "bad boy of

international cricket" for his in-your-face aggression, Ganguly seems to be having the last laugh. For, this team is imbued with what Ganguly's most vociferous critics would admit is his most precious quality: a searing passion to win. Under him, India no longer look like the wimps of international cricket. Suddenly, the team looks like a brash, confident and hugely talented bunch of champions. And the incredible victory over England in the second highest run chase ever in one-day internationals automatically raises the Big Question: Is this the dream team for the World Cup starting next February in South Africa?

On the face of it, yes. Wrote Mike Selvey in The Guardian: "On this evidence, (the World Cup) is not such a wild dream." The squad's average age is 24, and a reinvigorated batting line-up, distinctive, as Selvey put it, for "the sheer uninhibited joy of young cricketers unencumbered by the baggage of past failures", is unafraid to play up to its potential. In Virender Sehwag and Yuvraj Singh, India has two of the hardest hitting batsmen in the world. And the genie in Mohammed Kaif's bottle was finally let loose at Lord's. Yuvraj, whom writer Henry Blofeld calls "a cross between Gary Sobers and Graeme Pollock with a dash of Frank Woolley", has had a remarkable turnaround: since his comeback earlier this year, the left-hander has played decisive roles in six out of 12 ODIs; and India hasn't lost a game in which Yuvraj has scored 50 plus. As former England captain Ian Botham gushes: "This side should be the nucleus for the World Cup, where they are sure to be serious contenders." Says former South African vice-captain Craig Matthews: "India will definitely arrive in South Africa feeling they can go all the way in cricket's showpiece."

The Bengali from Behala is to be given credit for ushering in this youthful revolution. The team abounds with players he has handpicked in the last three years—Harbhajan Singh, Sehwag, Zaheer Khan, Ashish Nehra, Dinesh Mongia and Yuvraj. The results are showing and the winds of change promise to turn into a storm by the time the World Cup begins. "The team has the right combination of cubs and tigers to serve India proud for the World Cup," says Symcox. "But the youngsters will lead the way."

Most of the time on tours these days, you will find the cubs with Ganguly—either going out together for dinner or when invited to someone's house. The skipper likes the attitude they represent—aggressive and rakish, breezy and frank—a mirror image of himself. He likes the way they discuss cricket off-field. Ganguly also tries his best to see how they could improve. There is an interesting story of how he took Zaheer to Wasim Akram to see if the Pakistan pacer could help the fellow left-armer. Akram found Zaheer interesting material and reportedly asked the youngster to develop a "wild streak and eat a lot." Akram's theory: You need to be a little wild to be a good fast bowler.

But Ganguly's most critical decisions involved his compatriots in Indian batting's Holy Trinity: Sachin Tendulkar and Rahul Dravid.Tendulkar was nudged along gently to see reason in coming in at No. 4, even though it meant breaking up one-day cricket's greatest ever opening partnership, the venerable firm of T&G. Ganguly first wore the shoes himself to show Tendulkar that it doesn't quite pinch in the middle order—he let Tendulkar and Sehwag open in the home series against England, dropping himself down the order. Dravid was shown how one-day cricket's door was sliding shut on him, as it did on V.V.S. Laxman, if he wasn't going to pull additional weight.

These changes didn't happen overnight. Whispers from the dressing room have always floated on how bitter the Dravid issue was at Hyderabad where India were seriously in danger of losing a home series against Zimbabwe, with the Z-team up 2-1 in a five-match contest. A month before, England had come back from a 3-1 setback to square the series, with Ganguly's former Lancashire teammate Andrew Flintoff doing a bare-torsoed victory lap at Wankhede, waving his shirt over his head (that clearly rankled with India's captain, as events at Lord's have proved). Ganguly believed that India could no longer afford a keeper who wasn't a competent bat, and Dravid was the obvious choice to don the gloves. In the end, it was specialist Ajay Ratra who kept wickets in the match, but Ganguly refused to drop the 'Dravidian' case, and finally won it. Says former India keeper Chandrakant Pandit: "It's a good idea to have Dravid keep wickets. Also, as a keeper, he will get a very good look at the pitch which will help him as a batsman."

Yuvraj and Nehra have also been Ganguly's key battle issues. Yuvraj caused the most serious of all divides between the selectors and the skipper. Every failure and success of the youngster would get the two sides chirping. Nehra had few backers, even from his own zone, and the most famous—and ugly—incident was when he was kept out of the team to South Africa even as he kept remonstrating that he was fully fit. And along with the influx of youngsters and the senior-level reshuffle, Ganguly hasn't let his frailty and a little dislike for hard work come in the way of coach John Wright and his support staff of physio Andrew Leipus and trainer Adrian le Roux carrying out their relentless plans to get the boys fitter, leaner and meaner.

Le Roux has had a dramatic effect on the team. Brought in at the start of the WI tour, the ruthless South African trainer has already reduced the boys' body fat content by more than 30 per cent. Ganguly remembers the match against a first class team at St Lucia on the tour where he and Tendulkar sat out of the game. "We'd have been better off playing, it seemed. Instead of earning a rest, we were made to run around the island by Adrian." The fry-ups too have disappeared from the boys' plates.

Amrit Mathur, the team's communications manager, is astounded by the change in the players' attitude. Mathur, manager to SA in 1992, was left marvelling when the team hit the gym straightaway after a six-and-a-half hour drive from London to Durham after finishing back-to-back engagements the previous day. Mongia was fiddling with his mobile when Wright suddenly remembered the outstanding catch the Punjab youngster had plucked out of thin air to send Flintoff packing at Lord's in the opening game. "My hand is still sore," said Mongia. "What would you take—a catch with a bit of pain or no catch at all?" nudged Wright gently.

Team manager Rajeev Shukla speaks with a teenager's excitement when he mentions how everyone chips in with suggestions during meetings. "It's a free house. Every little incident is discussed. A mistake never goes unnoticed and undiscussed. Diagrams are drawn up to make a point." Marcus Trescothick is a case in point. The team spent a lot of time working out the England opener's strengths and weaknesses.Videos of his innings were replayed, diagrams drawn and it was identified how change of pace could help the cause. Also, Trescothick loves width, and any delivery which comes back at him could tuck him up.

There is a new work ethic visible in the team, where everyone knows his role, but is prepared to be flexible. Wright says flexibility is the key to one-day success. "There is too much work going on on the drawing board with all the teams—you need to have your thinking caps on at all times and be flexible," he says. This is reflected in the bowling options Ganguly could call upon at all times. India is the only team whose first four batsmen, the key to any line-up, are also more than decent bowlers. Indeed, the Lord's XI had nine players (Kaif and wicketkeeper Dravid are the exceptions), who could turn their arm over.

But is India really a serious contender for the biggest crown in cricket? They are in the Group of Death, with the two favourites Australia and Pakistan, plus England and Zimbabwe; only three will go through. Ganguly is almost arrogant when asked about this. "You shouldn't get too worried about your tough group. If you want to win the World Cup you've got to beat all of them anyway!" Dravid, usually cautious, also sees India having a realistic chance in South Africa.

India played in South Africa last year, and most of the players in this team have an idea of the conditions. Ganguly was in cracking form in the one-dayers and hit no less than 14 sixes, most of them off Shaun Pollock. But India kept getting beaten by the lack of batting depth. In the three matches against South Africa in which India were all out, the last four wickets fell for 29, 36 and 19 runs. That issue seems rectified now. Also, back in the side are Nehra and Zaheer.

The good news is that the team is still peaking and improving in critical areas. It should get better by the time the top tournament starts. The fielding has improved, though it's still hardly the best in the world. The catching has to become a lot smarter and safer. But the bad news is that India are still behind Australia, Pakistan and South Africa in one critical area: it has no bowler who packs the firepower of a Glenn McGrath, Shoaib Akhtar or Shaun Pollock. Says Matthews: "The one problem I see will be India's ability to defend small totals with this attack. All the speedsters have economy rates of around five and they won't be able to rely on two spinners entirely." Avers spin legend Erapalli Prasanna: "We need another fast bowler. I don't understand this thing about containing batsmen. If we want to win the Cup, we need bowlers who can take all 10 wickets. Or, at least appear to take wickets. When you look lethal, you naturally contain the batsmen."

Critics also harp upon India's inconsistency, but ODIs, by their very nature, are inherently inconsistent. If India are inconsistent, it only adds to the dangerous edge. The glory was for Australia in the last World Cup even though South Africa won most of its matches in the lead-up to the finals. In 1991-92, Martin Crowe's New Zealand dazzled and looked all set to lift the Cup, but it was finally outsiders Pakistan who won. India could have its ups and downs, but every international team now must watch out for Ganguly & Co. It's suddenly looking possible that the most hated man in international cricket could soon be lording it over them all.