Heritage conservation in India is a noisy Babel, and history and its many signposts are the worst victims 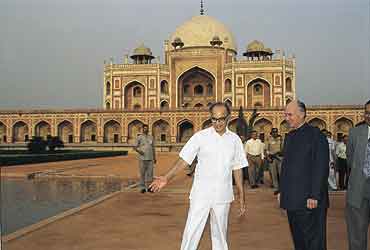 outlookindia.com
-0001-11-30T00:00:00+0553
Is it the Big Conservation Fight in its uncut version? Or is it an elite rendition of 'fish market' squabbles? The babel of voices emanating from the various lobbies involved in protecting heritage monuments is getting louder and uglier. Ideology, personal agendas and acrimonious polemics on the basics of conservation have made 'heritage' a contested term in India.

With the army deciding to move camp from Delhi's Red Fort after a century and a half and pass the monument in its entirety to the Union culture ministry, temperatures are likely to soar in an already raging conservation debate. Focus has been squarely on this 350-year-old monument after a PIL was filed by a group of experts in the Supreme Court against the ASI, which is under the ministry.

The dispute has only gone on to show that in the absence of synchrony between the ideology and practice of heritage conservation, everyone in the war zone—conservation architects, NGOs, self-appointed guardians of heritage, bureaucrats, ministers, and culture czars and czarinas—has his or her two bits of wisdom to offer.

In the main there are at least five groups that project themselves as custodians of heritage, each working at cross-purposes. They are: the ASI, INTACH, independent architects and academics, and NGOs and sundry 'concerned' citizens' groups. Then, there's Jagmohan who often doesn't see eye to eye with the ASI.

Madhu Bajpai, founder-member of the disbanded Conservation Society of Delhi that was famous for its heritage walks, says: "Team spirit, trust and understanding have to be built between various bodies to create precise knowledge on how to carry out conservation activity." Her society broke up over differences of opinion.

The Red Fort issue, which was meant to be a 'healthy' exchange of ideas, has degenerated into an 'off-the-record' slanging match between the involved parties. On the one side sits Jagmohan—superficially impassive but seething inside. On the other, throwing stentorian invective at the government's "reckless renovation work", is a group of 'public-spirited' citizens led by self-styled design expert Rajeev Sethi who along with seven others filed the PIL in October. The writ alleges the restoration work being undertaken at the Red Fort by the ASI "violates international norms of conservation". The grievance relates, inter alia, to the daubing of white cement over cracks in marble and the use of "cheap stones" in inlay work.

Says architect A.G.K. Menon, director of Delhi's tvb School of Habitat Studies and one of the litigants: "The ASI is making the Red Fort a complete travesty of the authentic original." For others, not directly involved with the PIL, the Red Fort affair offers a chance to seek a more participatory process. "The government has to understand that heritage is a resource. Conservation is not a one-department thing anymore," fumes Prof Nalini Thakur of the School of Planning and Architecture.

The ministry has held its ground in its reply to the court. "You may be an 'expert', but how does that make you an expert on conservation?" is Jagmohan's rhetorical question for Sethi. The latter alleges the minister's reaction stems from the mistaken impression that he (Sethi) is "looking for a job with the government".

Although the doyens of heritage conservation will all join forces to launch periodic attacks on the government, they are hardly united. Personalised wranglings over bureaucratic nitty-gritty, which are often bandied about as informed polemics, characterise the field. For instance, how should India define its heritage? Are international conventions such as the Vienna Charter of 1964, to which India is a signatory, be followed blindly, or should there be an Indian charter? How consultative should heritage conservation be?

Not surprisingly, these debates have yielded few answers.Meanwhile, squatters take shelter under historic canopies, builders raze unprotected monuments and kingly courtyards become cricket pitches. Few of these polemics have seriously addressed issues of population and life patterns vis-a-vis heritage conservation. For, monuments, as many scholars have convincingly argued, are not mere stones and mortar, but part of a history that is constantly on the make and is a living reality.

For the Indian conservation community at large, the red rag-in-chief is the ASI—the one body invested with an 'unjustifiable' degree of power to make and execute decisions. Governed by the Ancient Monuments and Archaeological Sites and Remains Act, 1958, which many refer to as an outdated piece of legislation, the ASI is currently overlord of 3,620-odd protected monuments. In addition, each state has its own archaeological department and some 9,000 monuments are protected under state legislation. "The ASI still operates on principles borrowed from the Raj. Only 'dead' monuments are considered worthy of conservation," Menon accurately observes.

His own approach emphasises the need for an Indian charter that accounts for both dead monuments and living cultural traditions. Similarly, Thakur teaches an "alternative paradigm" to architecture students, where heritage is understood to be the sum of any site's anthropological context and the policies that impact upon it, and specific action flows from this.

The INTACH is a category unto itself, as the country's largest NGO providing advocacy and technical expertise on heritage conservation. Guided by a conservation manual written by a Briton, INTACH's approach stems from a presumably 'western' approach that reduces conservation to a positivist discipline. In other words, a sort of leaner, updated and corporatised version of that grand old edifice, the ASI.

Not least is Jagmohan's four-fold approach. With a formidable reputation as a man of action, he's all for immediate results. "Tourism, preservation of culture, clean civic life and environmental upgradation all go hand in hand," he explains. His 'safai karao' (clean it up) approach carries clear traces of his instincts as a demolition man during the Emergency.

Another key player is the local NGO, which creates heritage awareness and acts as a pressure group. For instance, the efforts of Baroda's Heritage Trust in documenting the Champaner Fort have finally paid off, claims its president Karan Grover, since the site is now on India's nomination list for world heritage status.

It's hardly surprising, given these different groups, that any action by one of them elicits sharp reactions from others. In 1999-2000, INTACH was embroiled in a public spat with photographer Benoy Behl who had independently begun restoration work on 11th century cave paintings in Ladakh. "It was a case of misplaced passion. Such efforts cause more harm than anything else," says INTACH's Divya Gupta. Given that these caves are not protected under the 1958 Act, anyone with a conscience—with or without the know-how—can begin restoration work.

More recently, Hyderabad's bid for a nomination to world heritage city status fell flat because of the twin deficiencies of interest and timely action on part of the state and central governments. Vasanta Sobha Turaga, a Hyderabad-based conservation architect who had prepared and sent a 450-page proposal to the ministry in 2000, claims she has not received a formal response so far. (Jagmohan, though, did write a reply to a question on the issue in Parliament, stating "none of the clusters fall within the norms set by the World Heritage Convention...due to the effect of urbanisation and resultant interventions.") Says an exhausted Turaga: "The letter did not refer to any study conducted specifically to determine whether or not Hyderabad has the potential."

Where, then, does one go from here? Gupta feels working towards an inclusive definition of heritage may be a crucial starting point. "Let's see some constructive suggestions instead of this constant bickering which only causes confusion," says Jagmohan. Unfortunately, with everyone out to disagree, architectural heritage may be the biggest casualty.

Workshop Of The Elves