Together, In A Free Century

In an Outlook exclusive, US secretary of state votes for India 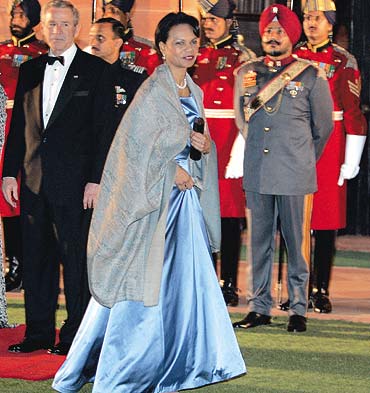 outlookindia.com
-0001-11-30T00:00:00+0553
There is a new spirit of partnership between the people of India and the United States who embody shared aspirations of our democratic societies. Over 65,000 Americans live in India, attracted by its growing economy and the richness of its culture. The millions of people of Indian descent who live in the United States today are adding not only to the wealth of our nation but are also helping enrich its character. The Indian and American people are building a partnership that touches fields as diverse as agriculture and health, commerce and defence, science and technology, and education. More Indians are studying in the United States right now than at any other time in our history—80,000 this year alone.

These relations on an individual level point a way forward for cooperation between our governments. India, the world's largest democracy, is a natural partner for the United States, the world's oldest democracy. India's society is open, free, transparent, stable, multi-ethnic and multi-religious. India is a democracy that is characterised by individual freedom, by the rule of law, by civilian control of the military and by lively politics.

India will soon become the world's most populous nation, as well as one of the world's five largest economies. As a rising global power, India can be a pillar of stability in a rapidly changing Asia and a strategic partner for the US as we meet the challenges of the 21st century.

America and India have so much in common, but until recently, the potential for our relationship was not being met. From the very beginning of his administration, President George W. Bush wanted to make the transformation of the US-India relationship one of our top priorities. And this transformation is exactly what the US and India have achieved.

With almost six years of hard work and goodwill, we have invested the necessary capital to build a global partnership. Our partnership is founded on strategic interests and common democratic ideals. It is a partnership that will advance the cause of peace and freedom and opportunity in this new century. Our civilian nuclear agreement is a critical contribution to the stronger, more enduring partnership that we are building. As President Bush said during his landmark visit to India in March: "The United States and India are now closer than ever, and the partnership between our free nations has the power to transform the world."

During that visit the President also spoke of his desire "to strengthen the bonds of trust between our two great nations." As we continue working to build a partnership of trust and respect between our governments, we are bolstered by the deep wells of goodwill that exist between our peoples. India and the US can accomplish great things together in this new century. We can define this new era not as "the American century", not as "the Indian century"—but as freedom's century. This is the great calling of our new partnership.

(Condoleezza Rice is the secretary of state of the United States of America.)