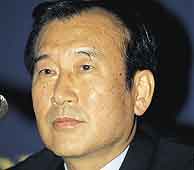 But both are now nuclear states.
It is indeed a sad state of affairs in the land of Mahatma Gandhi.

Has Gandhi inspired your people?
Definitely. But, unfortunately, Indians and Pakistanis seem to have forgotten his message of non-violence.

You think India and Pakistan are on the brink of a nuclear holocaust?
The danger is always there.

What, in your opinion, is the way out?
Peace won't come as long as the two countries continue to be hostile towards each other.

You see a contribution from your side in this direction?
I invite both the prime ministers to make the historic city of Hiroshima the venue for their talks.

How can India collaborate with Japan to spread the nuclear disarmament message?
Among other things, the Indian film industry can collaborate with us on a film we're making on the bombing of Hiroshima.

What effects of the bombing does Hiroshima still suffer from?
We still have burnt-down trees, buildings and scarred walls to remind us of the day.

Is complete disarmament possible?
Nothing is impossible.

The Hue of Cries