To Understand Pakistan, 1947 Is The Wrong Lens 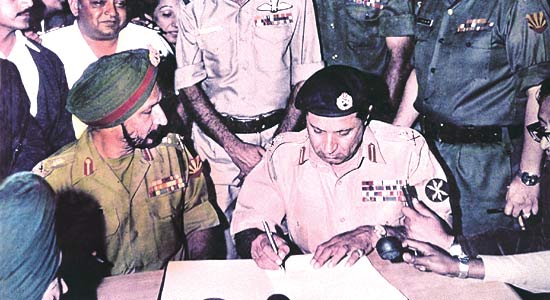 On a recent trip to India, I was moved by the genuine concern people have about Pakistan. As a Pakistani living in the United States, I am subjected daily to serious exasperation, courtesy the American media. Americans do not understand Pakistan because they do not care. And there is no real knowledge without caring. Indians certainly do care. Pakistan has been on the Indian mind since the moment of their co-creation. India and Pakistan are like two ends of a thread tied in a fantastic Gordian knot; their attachment magically survives their severance. And how the love grows! The recent Jaswant Singh controversy over Jinnah only partially unveiled how Pakistan is critical to the ideological coherence of Indian nationalism in both its secular and Hindutva varieties. But behind this veil, Pakistan has always been internal to Indian politics. It should come as no surprise then that establishment Indians (bureaucratic and political elites, intellectuals, media types, and the chattering classes) are well-versed in the nuances of Pakistani society. Indians understand Pakistan like no one else does, or can.

Still, there is this curious blind spot: no one in India appears to remember 1971. Worse, no one seems to think it relevant. For all their sophistication, Indian elites continue to understand Pakistan primarily with reference to the events of 1947. Anything else is incidental, not essential. The established Indian paradigms for explaining Pakistan, its actions and its institutions, its state and society, have not undergone any significant shift since the Partition. The tropes remain the same: religion and elite manipulation explain everything. It is as if the pre-Partition politics of the Muslim League continues to be the politics of Pakistan—with slight non-essential variations. More than 60 years on, the factors may be different but little else has changed.

This view is deeply flawed. It reflects a serious confusion about the founding event of contemporary Pakistani society. The Partition has a mesmerising quality that blinds the mind, a kind of notional heft that far outweighs its real significance to modern South Asian politics. The concerns of the state of Pakistan, the anxieties of its society, and the analytic frames of its intellectual and media elites have as their primary reference not 1947 but the traumatic vivisection of the country in 1971. Indians have naturally focused on their own vivisection, their own dismemberment; but for Pakistan, they have focused on the wrong date. This mix-up has important consequences.

Oddly, the Indian elite seem to have a blind spot for the dismemberment india subjected Pakistan to in 1971. their focus never seems to shift from the partition.

First, Indians tend not to remember 1971 as a Pakistani civil war, but rather as India’s “good” war. It is remembered as an intervention by India to prevent the genocide of Bengalis by Pakistanis. The fact that the Bengalis themselves were also Pakistanis has been effaced from the collective memory of Indian elites. This makes 1971 merely another Kargil, or Kashmir, Afghanistan or Mumbai—an instance of Pakistan meddling in other people’s affairs, and of the Pakistani military’s adventurism in the region. This is why mention of Balochistan at Sharm el-Sheikh created such a stir in India. It was literally incomprehensible to Indians that Pakistan could accuse India of meddling in its internal affairs. Surely, this is the pot calling the kettle black. But what the Indian mind perceives as Pakistan’s ongoing divorce from reality is in fact Pakistan’s most fundamental political reality. The Pakistani establishment has internalised the memory of 1971. In all things, and at all times, it must account for India. Dismemberment has the requisite effect of focusing the mind on existential matters. Nothing can be taken for granted.

Second, the Indian establishment routinely misconstrues as ideological schizophrenia the Pakistani intellectual classes’ complicated responses to India. The nuances of the Pakistani experience of India are the very picture of incoherence to them. Worse, Pakistanis often frustrate the project of creating a common South Asian sensibility to bridge the political gaps between the two communities.

But again, no one in India accounts for 1971 when making such grand universalising (and, if I may add, genuinely noble) plans for the future of the region. Pakistani intellectual elites share with their Indian counterparts the normative horror of what the West Pakistani military did in the East. How can anyone in their right mind not deem such behaviour beyond the pale? But horror does not preclude abiding distaste for the Indian state’s wilful opportunism in breaking Pakistan apart. It is for this reason that while the intellectual classes in Pakistan, especially the English language press and prominent university scholars, have almost always condemned their state’s involvement in terrorist activity inside India proper, they have remained largely quiet concerning Kashmir. What’s good for the goose is good for the gander. Kashmir does not seem so different to them than East Pakistan.

It is for this same reason that there was no great outcry about the isi’s supposed involvement in the bombing of the Indian embassy in Kabul. The general sense among the educated elites was that India deserved it for trying to “encircle” Pakistan through Afghanistan. Indians process this either as paranoia or as a visceral hatred of India that blinds Pakistanis to facts. Perhaps there is some of this too. But it bears appreciating that Pakistan is a post-civil war society. Fear and anxiety concerning India’s intentions in the region are hardly limited to the so-called ‘establishment’ in Pakistan. It is a general fear, a well-dispersed fear, a social fear. And a relatively coherent fear at that.

If the vantage point is 1971, it will allow Pakistan to be seen as a state that’s reacting to repeated defeats inflicted upon its forces by a larger neighbour.

This leads to the third, and perhaps the most important point. The Indian establishment does not see Pakistan as a ‘normal’ society. The substance of this abnormalcy is religion, which is also the irreducible difference between the two societies. It is the original sin and a foundational incoherence that is ultimately inescapable. And it has tremendous explanatory power. It explains both the ideological nature of the Pakistani state’s hatred of India and, simultaneously, the state’s manipulation of the zealous masses for its own ends. That these two explanations do not hold together coherently is besides the point to most Indians. This is an old story and is as such sensible. In the Indian imagination, Pakistan is endlessly regurgitating the politics of Jinnah and the erstwhile Indian Muslim League. While Indian politics moves on, Pakistan’s holds eerily still. I am certainly not one to deny that there are some obvious asymmetries between India and Pakistan. The nature of the relationship between religion and politics is certainly one of them. But it bears mentioning that perhaps the most relevant asymmetry concerns the repeated defeats suffered by the conventional Pakistani forces at the hands of their Indian counterparts. This asymmetry is neither that complicated nor particularly abnormal. It illuminates the actions of the Pakistani state as essentially strategic and only incidentally ideological. And in that sense, it allows an interpretation of Pakistan as a fairly pedestrian, even ‘normal’ post-conflict society in its relations with its much larger neighbour.

Ultimately, this is the real value of a renewed focus on 1971 rather than 1947. It normalises Pakistan. It allows for discussion of real differences between the two societies and the two states, rather than of reified stereotypes that have little political relevance any more. This is not to justify the actions of the Pakistani state, which are in many cases entirely unjustifiable on both moral and political grounds. It is merely to hope that a mutual comprehension of normalcy may lead to peace and progress. Certainly, no one will deny that there is value in that.

(The author is with the Religious Studies Department at Yale University. He is also a member of the MacMillan Initiative on Religion, Politics and Society at Yale and a doctoral fellow at the Centre for Global Islamic Studies at Lehigh University.)