To The Beats Of A Solo Performer

The story touches upon glamour and the cost it extracts. It's about crime, the afterlife and love... 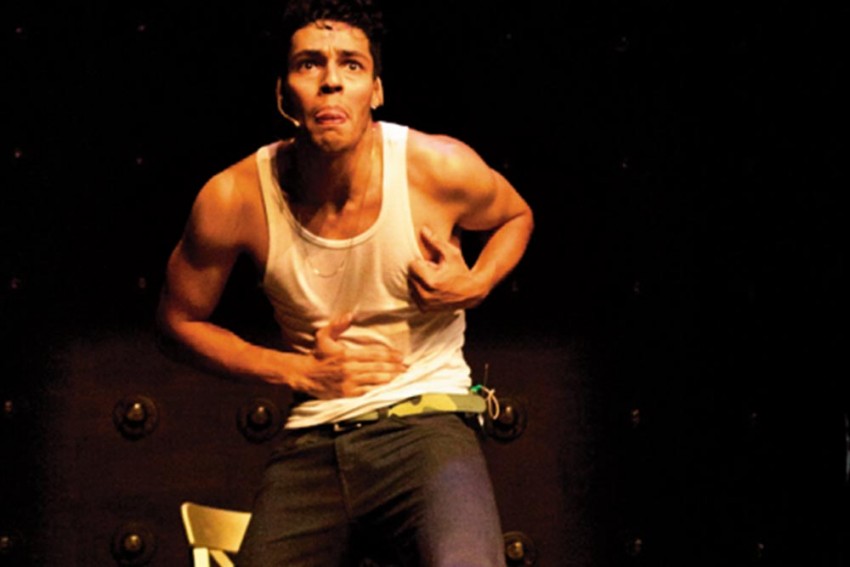 Dakota Arsenault
Prachi Pinglay-Plumber March 02, 2017 00:00 IST To The Beats Of A Solo Performer

Sitara Studios, where thespian Seb­astien Heins performed his solo act—Brotherhood: The Hip Hopera, lent itself to the evening in more ways than one. Tucked away in Gar­age Galli, a stone’s throw from Elp­hinstone Road station in Mumbai’s mill district, near Tilak Bhavan (Congress party’s office) and two slightly deserted malls, the studio is hard to find despite the GPS ­declaring that you have ‘arrived’. But make no mistake, this is a studio that has been frequented by several filmmakers and stars from the Marathi industry, inf­orms an old tea seller. The theatre is an intimate space with a seating capacity of not more than 120, and for this play, all ­curious and encouraging audience.

The dark, congested entrance and the frugal interiors—though with impeccable acoustics—­complement Sebastian Heins’ minimalistic appr­oach and a powerful dramatic rendering of the story of twin brothers—Cashmoney and Moneypussy­—which revolves around the accidental death of one sibling at the hands of ano­ther. The award-winning Canadian perfor­mer gets into the groove in no time for his hour-long, energetic act. Oscillating between hip hop, soul, funk, and gospel, Heins takes the audience on a roller coaster ride, playing several characters. It’s an intense act.

“Cashmoney: First thing’s first, I ain’t here to be yo nurse.
Mama told me to be yo brotha cuz y’don’t ­belong in a hearse.
I need to set this straight or I’ll never make you see
That when I’m talkin’ about you, wish I was talkin’ about me.
I think you a man now, your heart knows right from wrong
You bring hope, I bring pain, that’s the short and the long.
I’m a list of disappointments l-l-longer than the bayou,
You don’t know what it’s like to watch your brother walk right by you.
MoneyPussy: You ain’t perfeck, But that attitude’s gotta go
Ain’t a thang disappointin’ boutchu, my big bro
Where you think I learned how to rhyme and howta flow
Or to make a snow angel on that one day it snowed.”

Apart from the pace and movement, which clearly work in favour of the performance, even if some bits go way too fast or some ­silent actions are difficult to understand, Heins’ ­efforts to create the atmosphere with no props, except for a backdrop of lights, work beautifully—whether it’s meeting with his agent, driving the fancy car, the birth scene or the accident. The story touches upon glamour and the cost it extracts, crime and the afterlife, relationships and love. There are political references and ­social nudges aplenty.

The story, with social nudges aplenty, ­touches upon glamour and the cost it extracts. It’s about crime, the afterlife and love.

Though the story is set in another time, another place and among people we may think we don’t know too well, the telling draws you right into it and the universal emotions of success, failure, insecurity, power equations, guilt and redemption seem as close home as possible. While the craft is perfect in its racy bits—dance, hip hop, miming, singing, it is in quieter moments that excellence comes through. A long scene of a press conference, while serving jail term, particularly, is subdued yet poignant.

Hamilton, now a legendary Broadway musical that tells the story of American founding father Alexander Hamilton with abundant use of hip-hop , has been taking the theatre scene in the US by the storm for months now. However this treatment—to use hip hop to tell stories—is new to the Indian audience. Although theatre here does use folk arts—music and dance to depict tales, it is refreshing that QTP brought this talented performer for a few shows in Mumbai and Bangalore. Heins has visited earlier for a workshop during QTP’s festival, Thespo, and it is not surprising that QTP has made all efforts to get this talented artiste to perform here.

While grim and stark things keep happening through the play, Heins never leaves the side of love and hope. The performance, a ­familiar yet unique survival drama, celebrates the ­basic emotions and values of love, integ­rity and brotherhood.