To Tame The Wild 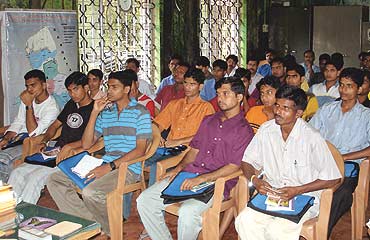 outlookindia.com
-0001-11-30T00:00:00+0553
A few months ago, Dattaraj Khandeparker, a taxi driver-cum-guide at the Doodhsagar Falls in Mollem, South Goa, couldn’t tell one spider from another. To be honest, he couldn’t have cared less as he took batches of tourists through the Mollem National Park, something he had been doing for the last three years. But a chance meeting between him and other guides at Mollem and the range forest officer, Amar Heblekar, changed their lives. Heblekar decided to turn this motley band of high-school dropout tour operators into wildlife experts.

With permission and funds from the Goa Forest Department, Heblekar arranged a workshop. He was aware these youngsters had already been identified as troublemakers. The Doodhsagar Tour Operators Union (DTOU), as the guides called themselves, monopolised the business, charged unreasonable rates and were also accused of threatening tourists.

Heblekar went around meeting the senior members of the DTOU, and passed out invitations for the nature interpretation workshop. Earlier, the Goa Forest Department, on Heblekar’s suggestion, had registered the operators as official tour guides for an annual fee of Rs 5,000 to ensure their activities would remain under its watchful eyes. "Most of the participants came to us unsure about what they would get from the day-long workshop," says Heblekar.

Heblekar was convinced the guides were ideal for spreading awareness about wildlife conservation. "They work in the field and if they knew about the rich flora and fauna of Mollem, they would be able to help tourists appreciate the environment a lot better. In the process, they would automatically become wildlife enthusiasts and conservators," he says.

"We discovered a wonderful new world around us," says an enthusiastic Khandeparker. A tour guide for over three years, 22-year-old Khandeparker was one of those who attended the first workshop. From a novice, Khandeparker developed his new-found expertise to rattle off the difference between a Giant Wood Spider and a Funnel Spider as well as little-known facts about termites and their importance.

Originally envisaged for 40 participants, the first workshop had 65 applications. On the next one, 46 were picking up basics on wildlife conservation and eco-tourism. Heblekar also arranged for an initial donation of 30 books from the forest department for a fledgling wildlife library for the enthusiastic tour operators.