To Tame The UFOs

Panic and confusion apart, the only positive thing: it's not a superspreader in India Updates 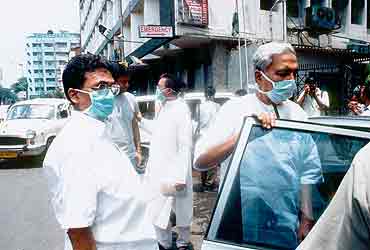 outlookindia.com
-0001-11-30T00:00:00+0553
How far away is India from a full-blown Severe Acute Respiratory Syndrome (SARS) 'epidemic'? Will the killer flu, caused by a tricky mutant of the largely-innocuous common cold-causing coronavirus, begin to kill here too? Or, will we be fortunate enough to evade death from an affliction that has killed more than 370 and infected about 6,000 people in 25 countries? These questions have begun vexing health officials and doctors in India now. More so after the total number of SARS cases in the country, led by a spate of fresh patients from Pune, climbed to 20 within a fortnight of the first case being diagnosed in Goa.

There are no clear answers yet. But a few things are certainly clear. India has been lucky to have not received, till now, what doctors are calling a SARS 'superspreader.' Like a 26-year-old Singaporean who infected more than 100 people or a 48-year-old businessman who passed on the virus to 80 health workers in Hanoi, Vietnam; or a 26-year-old Chinese who gave the disease to 112 doctors, nurses and medical students in a Hong Kong hospital. Even the officer-in-charge of Pune's National Institute of Virology (NIV), Dr A.C Mishra, confesses that most Indian patients are the result of "secondary infections caused by the primary case, wherein one individual has passed it on to the people in close contact with him" (see interview). Dr N. Kumara Rai, director, department of communicable diseases, WHO Southeast Asia Region, says all suspect cases in India have shown "mild clinical symptoms" so far and none show pneumonia in their chest X-rays. Says Rai: "It's possible that these are cases of mild infection."

Doctors are also debating a slew of other plausible theories to explain why SARS patients in India are only mildly infected till now. One points to the possibility of cross-immunity existing between the new coronavirus with the already existing and circulating coronavirus that causes common cold. (For example, the smallpox vaccine contains live vaccinia virus that causes cowpox in cow, while smallpox is caused by variola virus. Fortunately, immunity to vaccinia virus confers immunity to variola virus. This phenomenon is called cross-immunity.) Also, in viral infection epidemics, the first generation of affected patients get a more severe form of the disease and in the subsequent waves of transmission, it becomes less severe until it becomes a mild illness. Says Rai: "Since hygiene and sanitation levels in India are low in general, resulting in more frequent infections by harmless coronaviruses, many people might have developed immunity to these harmless viruses, which, as a result, has provided a certain level of immunity to the SARS virus."

But this could change any moment with the arrival of a 'superspreader' who manages to slip into our crowded cities after sailing through the largely porous airports, seaports and railroad stations. So don't panic, and remain vigilant. As Mishra told Outlook after the nine new Pune residents—all hospital staff who treated a man, his mother and his sister with atypical pneumonia—tested positive last week: "There's still no need to panic. These cases are very much like the earlier ones where a primary case has passed on the infection to secondary cases. Healthcare personnel will have to be more careful when dealing with SARS patients." Agrees Rai: "We must take it seriously, but we do not need to panic."

But that is not what is happening though. In Calcutta, the Apollo AMRI hospital lost about 20 in-house patients when it admitted Asitabha Purkayastha, 43, a textile engineer and West Bengal's first confirmed SARS patient. A childrens' cultural centre in the neighbourhood shut down in panic despite WHO repeatedly saying that the infection "requires close person-to-person or face-to-face contact" (see box).So strong was the pressure to evict Purkayastha that the hospital hurriedly declared him SARS-free and fit to be discharged. But state health authorities insisted that Purkayastha wasn't "totally" cured yet, and the hospital, hit by bad publicity, agreed to keep him back. Meanwhile, Purkayastha's neighbourhood in Madhyamgram, on the eastern outskirts of the city, continued opposing his return. A local organisation, Netaji Sangha, took upon itself to stop Purkayastha's discharge from hospital: "Would you allow the patient of such a highly infectious disease to roam free in your area?" A neighbour fumigated his house by burning kerosene because he believed it would kill the virus; another sealed the openings in grills around his house with plastic sheets to "keep the virus out". Even an ignorant municipality got into the act by sprinkling bleaching powder around Purkayastha's house. At Calcutta's Infectious Diseases Hospital, SARS became a ruse for its workers to shirk work with attendance dropping by 30 per cent after a patient was admitted.

Similar panic gripped Pune after four members from the D'Silva family were declared SARS-infected in the city: about 16,000 masks were bought in three days of the announcement. Residents of the Kumar Park Society in the city's Bibwewadi area, where the D'Silvas were quarantined, took to the streets demanding that the family be shifted to an isolated location outside the city. After their 10-day-long quarantine, the D'Silvas actually headed toward Ambernath, their hometown near Mumbai. But not before a relative snapped at the mediapersons thronging the Naidu Infectious Diseases Hospital which gave the D'Silvas a clean chit: "We're being treated like criminals."

Such harassment and public panic could have been minimised. "The government shouldn't have made the names of infected patients public," says Dr Sanjay Nagaral, editorial board member of Issues in Medical Ethics. "Not only was it a breach of patient confidentiality, it created a sort of unsavoury hype around SARS and only added to the scare." Dr Chandra M. Gulhati, editor of MIMS INDIA, a medical journal, lists a bloomer by our health authorities: "They initially insisted that only incoming passengers showing SARS symptoms were infected and needed to be isolated. Only after experts the world over pointed out that asymptomatic people could be spreading the infection, the government started tracking all arriving passengers."

Information is the key to stem the irrational panic sweeping sections of our SARS-affected cities. Alok Mukhopadhyay of the Voluntary Health Association of India advocates "simple information dissemination" strategies. Says he: "All we need to do is take clues from the past. During the plague outbreak, we were able to rope in Mother Dairy to distribute leaflets educating people. Helplines were set up to address queries and allay fears. Also, why harp on how inadequate our quarantining facilities are? For decades, Indians have practiced home quarantining whenever somebody in the family suffers from chickenpox."

Because, despite all the uncertainty about SARS, the big message that needs to be hammered home is the urgency with which it needs to be tackled. On current calculations, there is a 25 per cent chance that SARS will become a global pandemic, warns Dr Patrick Dixon, a leading London-based expert on global trends in diseases. Dixon predicts that there could be a billion SARS cases within 15 months if the epidemic doesn't fade out. "Unless the virus mutates into a less dangerous form, our only hope is to mount an immediate aggressive global response at the highest level." The battle against the virus has just begun and may never be won, but the battle against panic has to be won fast.

Soma Wadhwa And Harsh Kabra in Pune with Ashis K. Biswas in Calcutta