To Stop A Bomb

They have data from over 8,500 blasts. Sadly, more pours in daily. 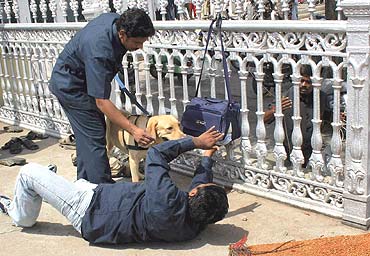 Set up in 2000, the NBDC has used its limited resources at hand wisely. Placed under the National Security Guards (NSG), it became the repository for all bomb-making and disposal data. Every year, it collates material on nearly 250 bomb blasts across the country, hoping to spot emerging trends, new designs and "fingerprint" the bomb-makers.

"We don't have the expertise to track the actual bomb-maker yet," says Ahooja, "but we can broadly identify the organisation that is behind a blast." From studying printed circuit boards to detonators, trigger mechanisms, fuses, and battery cells, the NBDC has tried to build up a databank that is on the frontline of India's efforts to combat terrorism. Armed with information on 8,848 blasts since 2000, it is trying to crack the bomb-maker's code. For years they have been tracking trends, some discernible, some confusing and some ominous. Here are a few:

Over the years, experts at the NBDC have been playing the cat-and-mouse game to stay a few steps ahead of the terrorists. But that happens rarely because the terrorist is only limited by his ingenuity. The best bombs, experts agree, come from the jehadi groups such as the Lashkar-e-Toiba and the Jaish-e-Mohammed. "They usually have the best circuitry and trigger mechanisms and have time-delay features to ensure that the terrorist can get away safely before the blast," says a NBDC official.