Legalising prostitution is not the answer. Nab the traffickers. 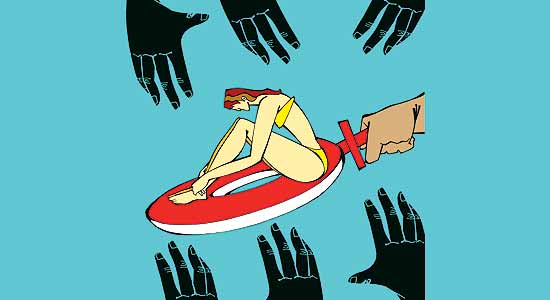 When a problem is big and tends to profit a powerful group, there’s a time-honoured temptation to sweep it under the rug by assuming it’s natural and inevitable. This was true of slavery until the abolitionist movement of the 19th century, and of colonialism until the contagion of independence movements in the 20th century. Now these same forces are at work in attitudes toward the global and national realities of sex slavery.

The biggest normaliser of profiteering from the rental, sale and invasion of human bodies is the idea that it is too big to fight, that it has always existed, and that it can be swept under the rug by legalising and just accepting it. Those who profit—in this case, the global network of sex traffickers, sex tourism operators and brothel owners—are the major force behind the argument to legalise and increase profits that already rival those from the global arms and drug trade.

What will diminish and end this injustice? Exposing its reality: the lack of alternatives for those who are prostituted; the addiction and inability to empathise among those who create the demand, and the disastrous results wherever the selling or renting of human beings for sexual purposes has been legalised and normalised.

In Australia and the Netherlands where prostitution has been legalised, for instance, trafficking and the harms that come with it have only increased. In Victoria, Australia, it not only allowed legal brothels to proliferate, but illegal brothels increased by 300 per cent in a year. A hospitable environment for sex tourists and other buyers drove up demand local women and girls had too many alternatives to becoming the supply, they had to be trafficked from Southeast Asia.

The same is true of Amsterdam where trafficked East European and North African girls outnumber Dutch citizens in brothels. The mayor of Amsterdam reports that the red-light district has become a centre for illegal immigration and money laundering. In Germany and in an area near Las Vegas where prostitution has been legalised, government agencies tried to make applicants for unemployment benefits show they had attempted to find ‘work’ in the so-called ‘hospitality industry’ of prostitution in order to become eligible for such benefits. This was only defeated by massive organising by women’s movements.

In the few countries that have legalised prostitution—with the idea that it would reduce harm to prostituted women, as is now being argued by some in India—rates of assault and rape against the prostituted have not dropped.  There is also no corroborated evidence that legalisation increases the use of condoms or women’s power to demand such use. On the contrary, an official emphasis on condoms has often made it possible for brothels to demand more money for unprotected sex, while also causing them to conceal the number of prostituted women and children who have lost their lives to AIDS.

In Calcutta, a group of women who had asked for the unionisation of prostitution to guarantee workers’ rights  admitted to facing violence when they’re alone with the client. “They paid for it, we cannot stop it.” A doctor working for this group said he left after having to stitch up the vagina of a fifteen-year-old Nepali girl—for the third time.
But there is some good news. It comes from countries where traffickers have been pursued, and prostituted women and children have been given services and alternatives. Sweden has gone after traffickers and pimps, confiscated their illegal assets, and made them compensate for damages while also decriminalising and offering services to prostituted women and children. By imposing penalties on those who create the demand and providing ‘John schools’ that address their addiction to dominance, they diminish the problem itself.

The result has been a significant decrease in sex trafficking and the commodification of sex. In ’99, it was estimated that 1,25,000 Swedish men bought about 2,500 prostituted women one or more times per year, before the law came into force. By ’02, this figure had fallen to no more than 1,500 women. The only truly effective way to curb trafficking is to see it for what it is, an outrage to human rights; one that can diminish, just as labour slavery and colonialism have come to do. Prostitution has not existed in all societies: it is a function of the inequality of women and the equation of masculinity with domination. All men in the present are not dependent on prostitution.

Commodification of human beings creates a separate class  of people whose bodies can be rented or sold—the very opposite of the universal protection of human dignity enshrined in the body of the Indian constitution.

(The author is the founder and president of Apne Aap Women Worldwide, an anti-trafficking organisation.)

‘Guilty Will Be Punished’