To Kill A Passenger 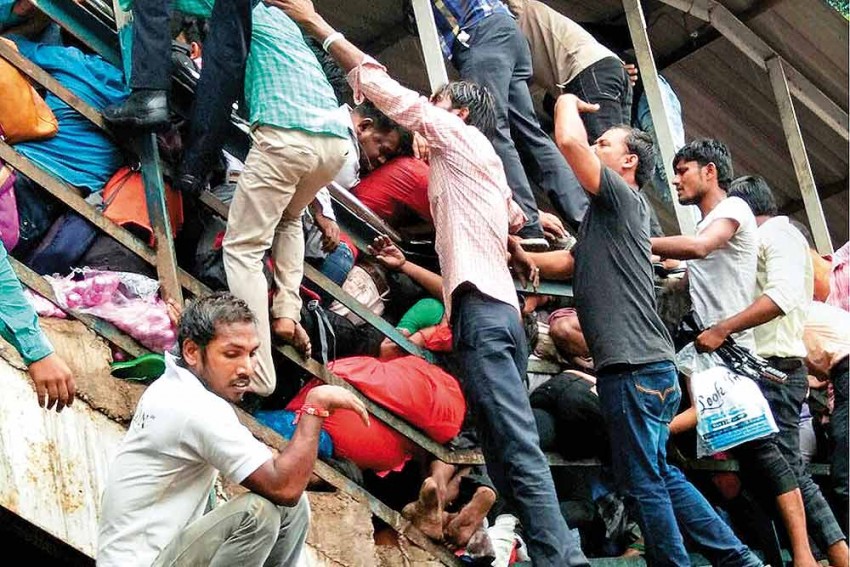 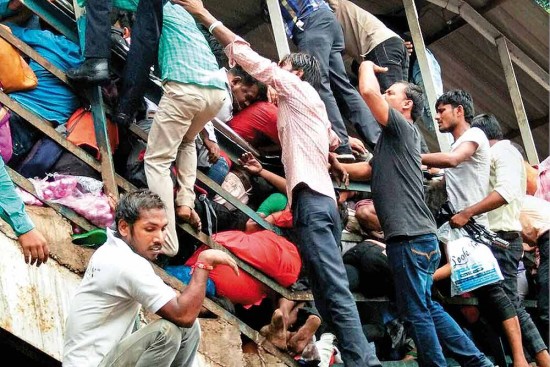 It’s like the vanishing point—that optical illusion where two parallel tracks appear to meet in the far distance but never do. In India, guilt and accountability are these two tracks. Or call them crime and punishment. The majority of our rail accidents—as many as 80 per cent—are on acc­ount of “human error”, and they exact an unacceptable cost in human lives. In 2016-17, no less than 238 people died, and 50 more since March, right up to those who peri­shed in the ghastly Elphinstone bridge stampede. Someone somewhere has to answer for all those corpses. But is the blame ever fixed on the guilty? Is anyone held guilty? Is any form of punishment deemed appropriate and handed out?

The real tragedy is that no one ever pays for the criminal negligence that caused these deaths. Only in the Gaisal case did six or so officials get dismissed from service. The cases mostly drag on. Accidents get blamed on the almost philosophical idea of “systemic failure”, and things carry on as before. This INS­titutionalised way of erasing actual human accountability causes more deaths.

Consider what happened before Elphinstone. Hit by a spate of train derailments in late August, then railway minister Sur­esh Prabhu made a big show of accountability. Starting with himself, he offered to resign taking “full moral responsibility”. A.K. Mittal, the Railway Board chairman (CRB) who was alr­eady on extension, was asked to put in his papers. And after prima facie lapses were found in the maintenance work at Khatauli that led to the Utkal Express derailment (toll: 23), three other top officials were sent on leave.

Taking cue, Northern Railway terminated the services of 13 employees, invoking the rarely used section 14(ii) of service rules that allows dismissal without an inquiry. These include 11 trackmen, one ironsmith and one permanent way inspector (PWI)—all Group ‘C’ employees. On the surface, the railways appeared to have acted swiftly, owning up to its responsibility.

Eighteen years after the Gaisal tragedy that killed 400 people, neither CBI nor Railways can confirm the case’s status.

But in effect, all of it came to naught. Six weeks down the line, the dismissed employees have appealed against the “illegal action” and are most likely to be reinstated. All, except the PWI perhaps, who may take a little longer since he has also been indicted by the Commissioner of Railway Safety (CRS), along with the stationmaster and the section controller. Shiva Gopal Mishra, general secretary, All India Railwaymen’s Federation, says dismissals under that section are illegal since it can only be invoked if a free and fair inquiry is not possible. “It will not stand on appeal,” he says.

The full update: The general manager (GM) and the divisional railway manager (DRM), who were sent on leave, have rejo­ined work. It’s business as usual for the senior officers. The ‘action’ was only to quell the outrage following the accidents. CRB Mittal was anyway on his way out as the government was not comfortable after giving him a two-year extension. His successor Ashwani Lohani had already been sounded out. The member (engineering), also sent on leave, was close to superannuation, and has since retired.

Going by precedence, the Group ‘C’ employees may spend some time in appeals before they are reinstated. The CRS inquiry report itself may become void: attempts are being made to waylay it with talk of “fabricated evidence”. Typically, nobody will be punished for causing deaths. Once the heat is off, most of them will be back; that has been the norm.

There are two layers to this permanent freedom from guilt. One is active self-exo­neration. Railway officers will go to any length to ensure direct blame does not come on their brethren. For them, there’s the usual list of ali­bis: lack of funds, overburdened networks, delays in the tendering process. The most recent being ‘sabotage’—blaming a third party like Maoists or even Pakistan’s ISI. A senior official voices the typical line of mystification, saying “It’s a deeper malaise. One has to go to the roots to understand its manifestation.”

The second is a genuine question. How exactly do you distribute culpability along this mammoth and complex chain of command? A Grade ‘C’ employee can be guilty of negligence, but he’s not to blame for the creaking infrastructure. And how far can a senior official or minister be deemed culpable if one among the 70,000 engine drivers sleeps on the job? Every point of action is attached to a maze of collective responsibilities—the near-mystical ‘system’, which is almost designed to thwart pinpointed blame. The point is to ensure clean and safe operations along all axes of this interlocking system. But how?

Indra Ghosh, a traffic service officer who had a long stint in the Railway Board’s Safety Directorate, says it is impossible—even unfair—to fix responsibility for operational errors at higher levels. But they can be held accountable for their decisions. “If a minister appoints a useless stores officer as the CRB, the minister should be held accountable: it affects decisions down the line. Likewise, if a GM or DRM doesn’t clear crucial files or takes months to award a tender,” he tells Outlook.

The way to minimise mishaps, says Ghosh, is to ensure that “unsafe working” behaviour is checked at every single locus of supervisory responsibility—“a careless gateman or PWI may get away by not closing the gates of a manned crossing a few times but one day an accident is bound to happen.” The Utkal Express derailment was not the first of its kind. Ghosh recalls a similar accident in 1997 when five bogies of Ahmedabad-Howrah Express derailed and fell into a river in Bilaspur. “A PWI had opened the track and was working on it without taking a block when the train came and derailed. He was probably used to working like that. He may even have been praised earlier for working without disrupting the traffic,” he says, adding this ing­rained “laxity” in working style need to be stamped out.

But as of now, this happy-go-lucky style prevails, with no fear of punitive measures. The horrific head-on collision of Brahmaputra Mail and Awadh-Assam Express at Gaisal on August 2, 1999, is a classic case of how 35 railway personnel, held guilty of causing 400 deaths, did not have to spend even a single day in jail. The accident has gone down as the worst ever in the history of Indian railways, forcing then minister Nitish Kumar to resign even as more and more mangled bodies were being extricated from the wreckage. Kumar called it “criminal negligence” and “a total failure of Indian railways”.

The Brahmaputra Mail, packed with soldiers and security personnel from Guwahati, was going full throttle when, through a signalling error, it was routed on the same track as the stationary Awadh-­Assam Express at Gaisal station in north ­Bengal. A head-on collision is one of the rarest kinds of rail accident. Reca­lling the grotesqueness of the scene, Anindya Jana, a senior journalist who reported on the trag­edy, says, “There was a mass cremation set up by a river running through the area for the 400-plus bodies. Most of them could not be claimed…they were unidentifiable.”

A judicial inquiry headed by Justice (retd) G.N. Roy held 35 railway officials responsible: 17 charged with primary responsibility, eight with secondary, 10 more being termed blameworthy. These included drivers, assistant drivers, signal operators, assistant station masters (ASMs) and cabinmen. “As per rules, those fixed with primary responsibility must be punished—either lose their job or a promotion. Others generally get away without any punishment,” explains an officer with the Safety Directorate.

But before any action could be taken, a “sabotage” buzz was created. “Word went around that the wife of one of the drivers was paid Rs 15 lakh as part of a terror plan. That’s when the CBI was brought in,” recalls a senior officer posted in the region then. The CBI finally ruled out sabotage and framed charges against eight officials, two of whom died during inv­estigations. The remaining six were convicted by a court in Islampur in 2007 for causing injury and death due to negligence. They were sentenced to two years imprisonment and a fine of Rs 11,500 imposed on each, but they were granted bail immediately and given time to appeal.

The report on the accident in Khanna (1998) is still “under consideration”. The official held culpable retired as board head.

Shockingly, neither railways nor the CBI could confirm the present status of the case. A ministry spokesperson did not res­pond when asked about action taken against officers against whom primary responsibility was fixed—whether they were sacked, denied promotion or reinstated. Nor is an official toll available for Gaisal: it varies between 350 and 400-plus as per reports. Queries to the CBI too drew a blank.

Independent inquiries by Outlook reveal the case is technically still sub-judice and the six convicted men out on bail. They were permanently discharged of their duties, however. They did appeal to a higher criminal court in North Dinajpur, but the trail goes cold after that. According to Partha Tapaswi, the CBI counsel who was in charge of prosecution, the case was no longer pursued by the CBI in Calcutta after his promotion and transfer to Delhi as CBI’s additional legal counsel. Jana says, “I am appalled to know the men convicted of such heinous negligence remain at large.”

The Khanna accident case history—the Jammu Tawi-­Sealdah Express had collided with derailed coaches of Gol­den Temple Mail—is even blanker. Justice G.C. Garg’s report is officially still under consideration. And the in-charge of the track directorate, which was held primarily responsible for the derailment, retired honourably as the CRB.

Now, less than a month into his tenure, new railway minister Piyush Goyal faces his first big test with the Elphinstone stampede. He has vowed to fix responsibility for the 23 deaths, but the inquiry seems to be going nowhere. There’s a basic confusion about who owns the bridge, which connects Parel station to Elphinstone Road. Parel comes under Central railway; the latter under Western. “The GMs of both are passing the buck to each other. No one is likely to be held res­ponsible,” reveals an officer. This follows the depressing pattern set before.

All the officers Outlook spoke to, including retired ones, preferred to speak in general terms of systemic reforms. No one favours the idea of individual culpability—they feel it could be counterproductive. Former CRB Vivek Sahai, for instance, says harsh action “may demoralise officers and they may take recourse to restri­ctive methods, jeopardising the mobility of the system”.

Says former member (engineering) Subodh Jain: “Strict act­ion against, say, a gangman may have a disciplinary effect and may create a sense of fear but it’s unlikely to have an impact on safety standards. Most railwaymen are not habitual offenders. We will unnecessarily create an environment where the message will be no-accountability-unless-an-accident-happens.” Jain says a fair system of accountability does exist. “Action is routinely taken against drivers for SPAD (signal passing at danger). There is a monitoring system.”

Former railway minister Dinesh Trivedi says the tendency is to hold the last man on the ground accountable—the gangman, pointsman and the PWI—but adds that they are not qualified to judge the quality of rails, for example. “There is no accountability at the top. The entire railway system is faulty. Where should the buck stop?” he asks. We have the same question.

By Bhavna Vij-Aurora with Inputs from Dola Mitra in Calcutta

Lady With The Stalin Organ