To Kabul, And Back

It's a bleak, war-ravaged landscape that the Indian side is now parachuting politically into 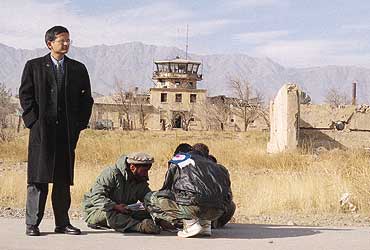 outlookindia.com
-0001-11-30T00:00:00+0553
It’s around 6.30 am on December 12 when powerful interior minister-designate Mohammad Yunus Qanuni walks briskly into the officer’s lounge on the first floor of the air force station at Palam, swinging a walking stick. He takes a sofa in the corner, smiling at those who glance his way and letting an interpreter politely fend off inquisitive reporters seeking a quote. A little later he is led gently away to another room marked "For Brigadiers and Above" by A.S. Toor, a ministry of external affairs official who had been in Afghanistan at the time the Indian Embassy evacuated its staff on September 26, 1996.

Qanuni and a gaggle of journalists were waiting to board the IL 76 transport flight, ferrying a team of doctors and medicines to Kabul. We were scheduled to leave at 7.30. But courtesy a fog and zero-visibility, it’s only at 10.30 that we board the plane, led by India’s special envoy to Afghanistan S K Lambah, Arun Singh and three joint secretaries. The Indian Air Force has installed a metal cabin, furnished with sofas and a table, which is where Qanuni retires to, veiled from the rest of us by a curtained window and door.

We are soon flying over Pakistani airspace, more precisely Lahore. It isn’t always that an Indian military aircraft is allowed overflight facilities over that country. But the Indian government had submitted a detailed passenger manifest to Pakistan on Monday, and the permission from Islamabad came not because of a sudden inexplicable thaw between the two countries. Qanuni’s presence on the flight did the trick; the Pakistanis seemingly didn’t want to displease a person who is expected to play a key role in the future government, slated to take office on December 22.

The overflight facility enables us to reach Kabul in just two hours; it would have taken another four had we not done so. At noon, Afghan time, we touch down at Bagram airport, referred to often in TV news in the weeks of US bombing. Devastated buildings and shattered choppers stand testimony to the ravages of war. I am advised not to wander away from the tarmac since the rest of the airport area is still heavily mined. As someone discovered five days ago when he was careless and got his legs blown off.

The wind is chilly, the temperature a freezing five degrees. Qanuni alights from the aircraft, only to be swamped by waiting journalists. It’s his moment of glory; the prodigal son returning from Bonn after stitching together an agreement on the future that’s comprehensively sidelined Burhanuddin Rabbani. And once Qanuni does manage to extricate himself from the newshounds, the waiting band break into a rousing welcome tune.

Moments later, a jeep with two Americans draws up to the IL 76, and waits for the offloading of the medical consignment the US embassy in Delhi had specially requested for. There is also an additional tonne of medical cargo for the Indira Gandhi Children’s Hospital (it tends to 320 patients a day). The unloading is supervised by a medical team comprising a paediatrician, an anaesthetist and a surgeon, summoned respectively from Bhatinda, Srinagar and Patna to bolster the Indian team present already in Kabul. When these doctors had been asked to report to Delhi on Monday with their passports, none had known where they were headed to.

We don’t go to any migration counters, have no queues to negotiate. Our passports are collected, and entry visas stamped on the tarmac itself. The Indian diplomatic team is carried away in five Mercedes which quickly speed off towards Kabul. We journos pile into a bus that sputters agonisingly towards the city, taking over an hour. The airport perimeter is secured by American and British soldiers, some of them demining experts.

We see signs of destruction everywhere. Acres and acres of grape and apple orchards, now reduced to a uniform charred blackness, stretch into the horizon. Irrigation channels, I am told, had been systematically destroyed in more than a decade of fanatical war. In the distance, Afghans are rooting out the dead stumps and carrying them to be loaded onto trucks waiting by the road. They are to be sold as firewood. There isn’t a single mud-building intact all the way to Kabul. They have all collapsed in mud heaps. Intermittently, we pass abandoned tanks, some with their turrets blown off, others with their twin tracks ripped apart. And all gently settling into the crumbling land.

On our way to Kabul, I spot stones painted white and red on either side of the road. They have been placed there to warn people of the heavily-mined area beyond. One false step can make you one of the many who have perished in the last two months. Pick-up vans overtake us; most having as their passengers bearded and turbaned Northern Alliance personnel holding grenade launchers and Kalashnikovs. Only some vehicles sport licence plates but almost all have pictures of slain Northern Alliance commander, Ahmed Shah Masood.

As we enter Kabul, there is evidence of habitation all around. But every building, every wall is scarred by the war, either partially destroyed or just reduced to rubble, or pock-marked with bullet holes. But the markets are stocked well with cauliflowers, onions and potatoes and slabs of meat hang heavy from hooks. However, for all the talk about women coming out in droves ‘post-liberation’, I hardly spot any.

On reaching Kabul Hotel, we find Lambah talking to representatives of the Indian community. A diplomat who had served in Kabul in the ’80s tells me this hotel had been to Kabul what the Ritz is to New York. But now it has little to advertise for that past glory—toilets need urgent repairs; garish red sofas fill its reception rooms; the walls are bare and a cold draught whistles through. There is an eerie silence despite so many people around. It’s here that the Indian liaison team is put up, three to a room, with a satellite phone and a fax machine which rarely works.

On one sofa sits an old sardar, clutching Masood’s portrait, listening to Lambah hold out promises of a better tomorrow. Ten minutes for lunch, barely enough to have a cold naan, and then we have to rush to the foreign office to meet Abdullah Abdullah. The building is surprisingly among the few the war hasn’t touched in Kabul. Abdullah stands out because of his attire, oddly western in all the Afghan setting. The meeting between him and Lambah is brief, given the fact that the foreign minister-designate is to travel with us to Delhi on the return flight.

Defence Minister Mohammad Fahim is our next port of call. We are frisked, the cameras inspected closely. No one is taking any chances ever since Masood was blown up by suicide bombers posing as journalists. When allowed in for a photo-op, the Indian team expresses hopes of a fruitful engagement.

It’s then back to Bagram in a race against time. It’s rapidly getting dark, and with no night-landing facility here, it’s imperative that we take off before the surrounding mountains become invisible. Taking no chances, the pilot is already revving up the IL 76, waiting to be airborne at short notice from this devastated country.

It’s into this landscape that India is parachuting politically. Three Afghan ministers have been in Delhi in less than a week, testifying that Kabul is now not as far from Delhi as it was before September 11. "We have to thank Osama bin Laden for this," says a senior government official. But luck alone hasn’t played a part in all this. Indian officials have been busy as beavers putting in place a new roadmap of engagement with Afghanistan.

And this relationship with Kabul, say government officials, is to be viewed not through the prism of Pakistan but on its own terms. It’s easier said than done. On the way back to New Delhi, with Abdullah Abdullah ensconced in the same cabin Qanuni had been in before, Pakistani air traffic control authorities are constantly asking iaf pilots to deviate from the previously-approved flight path. A subtle reminder that the way to Kabul lies through Pakistan.