Home  »  Magazine  »  International  » madrassas »  To Hush The Steeds Of War

To Hush The Steeds Of War

The absence of opposition to Musharraf's madrassa reorientation programme, it's feared, is merely a lull before the mujahideen storm 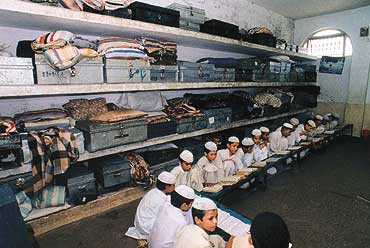 outlookindia.com
-0001-11-30T00:00:00+0553
Muridke is just 100 km away from the bustling city of Lahore. But much changes over this distance—the town has neither Lahore's frenetic pace nor its cosmopolitan outlook. Muridke could indeed have been yet another addition to the long list of nondescript Pakistani towns but for the sprawling complex of the Markaz Dawa Wal Irshad, the parent organisation of the Lashkar-e-Toiba (LeT). Spread over 200 acres, with boundary walls curtaining it from the world, the Markaz (now Jamaat al Dawa) imparts education from primary to university levels, its students as adept at using computers as they are in propagating and spreading Islam.

But before the World Trade Center came crashing down in New York and before armed militants attacked India's Parliament on December 13, the Markaz complex in Muridke was also the hub of those who wished to train for the jehad in Kashmir. Students between eight and 20 lived on the campus, acquiring, under the supervision of superannuated army officials, the skills of modern combat. And, to toughen the callow militants, the Markaz maintained a stable of two dozen thoroughbreds, endorsing the belief that one sure way of conquering fear is to learn the art of controlling the horse.

The decision of Pakistan's President Pervez Musharraf to ban the LeT and arrest its chief, Prof Hafiz Mohammed Saeed, has had its impact on Markaz. The horses have been tethered, the militants have disappeared, the academic bosses are now calling the shots. As one of its administrators admits, "The emphasis is now on religious education. The military training is now a thing of the past."

The crackdown has had its echo in Lahore too. The Markaz's offices on Chamberlain Road, Lake Road and Nila Gumbad have been sealed; ditto the Jaish-e-Mohammad (JeM) office on Bund Road. The Harkatul Mujahideen (HuM) had anyway shifted most of its activities to NWFP and Azad Kashmir (PoK) last year. The arrest of three prominent jehadi leaders—JeM's Maulana Masood Azhar, Saeed and Tehrik-e-Nifaz-e-Shariat-e-Mohammadi's Sufi Mohammad—has left their thousands of followers in a limbo, unable as they are to take decisions about where to go and what to do.

So, is Pakistan winning its war against Islamic militancy? There are two distinct schools of thought. Optimists say it's only time before Islamic militancy is rooted out, perceiving encouraging signs in the muted response to the government's anti-militancy policy, the absence of protests against the revamping of the madrassas and the fact that no militant outfit has moved court against the ban.

But HuM activist Ghulam Mustafa says the lack of public protests against the government is because President Musharraf has been very shrewd in playing his cards. He argues: "The reason why the public did not come out in favour of Kashmiri mujahideen is because the government successfully confused the jehad in Kashmir with the issue of sectarian terrorism at home. The government conveyed the erroneous impression that all jehadi groups and religious parties were involved in sectarianism, terrorism and misuse of mosques. It was a well-thought-out conspiracy to corner Islamists and subjugate them by riding the wave of western fury against the mujahideen."

The school of caution, largely consisting of bureaucrats, says it is still too early to predict the outcome of the conflict between the government and the militant outfits. Proponents of this school say that not only have hardcore jehadis gone underground to re-orient the Islamist movement, the proscribed outfits are also trying to iron out their differences and rally together on a common platform, consequently hoping to counter the might of the Pakistani state. In a message posted on the LeT's website, Saeed says: "I cannot change my course in the wake of trials and tribulations.I shall continue my struggle until the Muslim ummah is liberated and Allah's word is established in the world."

The tough task the government faces can be discerned from the sudden emergence of Al Saiqa, a jehadi organisation ostensibly operating underground. Through a clutch of anonymous press releases, Al Saiqa has declared Pakistan as 'Darul Harab' (the home of war) and 'Darul Kufar' (the home of infidels), besides threatening to carry out attacks on Pakistan's law enforcing agencies. The organisation has claimed responsibility for "the first armed assault against the Frontier Constabulary (FC) troops" in NWFP last week. Says a senior law enforcement official: "We have got hold of eight hand-written Urdu pamphlets criticising the present government's policies. Marked Al Saiqa, one of these asked the government to stop meddling in the affairs of deeni madaris (madrassas), for the religious institutions are the fort of Islam and we are its soldiers."

Yet another Al Saiqa press release says: "The guerrilla war in Pakistan will continue till the Islamic revolution.... Every Muslim should know that initially every guerrilla war is taken casually, but it expands gradually. We take prior responsibility for every attack on and killings of the law-enforcing agency men in Pakistan.... All detained religious leaders and mujahideen should be released immediately." Sources say the government has asked the NWFP administration for a detailed probe into the incident.

All that said, the attempts to effect a rapprochement among the warring jehadi organisations will not exactly be a cakewalk. Their differences run deep; even intelligence agencies in the past had failed to unite them. Their animosity came to the fore at the time the Indian government swapped Azhar for the release of hijacked passengers. Floating his own outfit, the Maulana went on a countrywide tour calling on HuM and LeT activists to join him, his claim: that JeM was the only authentic jehadi organisation.

Different sources confirm that the five most prominent jehadi organisations—LeT, JeM, HuM, Al Badr and Hizbul Mujahideen—have assumed new identities and shifted to undisclosed bases to launch their underground movements. Interior ministry sources estimate that in all 5,000 religiously-motivated Pakistanis are on the rolls of these organisations. A senior Pakistani security official points out: "An underground army of 5,000 armed and trained religious extremists can move against the about-turn on jehadi outfits. And they can pose a great threat to law and order."

The government is also seriously considering an ordinance that would ban any person who has earlier worked with any jehadi, militant or sectarian group from joining or establishing any new organisation in the future. Says political analyst Hussain Naq: "The reason why the government is considering such an ordinance is probably because of the growing concern about a backlash from the other jehadi groups and sectarian elements who have gone into hiding to escape the ongoing crackdown."

Musharraf is also attempting to persuade the madrassas that his attempts at integrating the religious seminaries in the formal system of education isn't anti-religion. During his visit to Jamia Ashrafia—a leading madrassa in Lahore—last week, Musharraf said: "You should disseminate knowledge of all kinds so that they (the students) can play an active role in the process of nation-building. ... If someone wants to join the banking sector or the civil service, madrassas should be able to help him in appearing for the examinations being held under the boards of education or universities." This, the president said, should be in addition to the religious education they receive. But the million-dollar question remains: will the madrassas listen to Musharraf or to the jehadi leaders?