To Draw A Few New Lines On The Palm 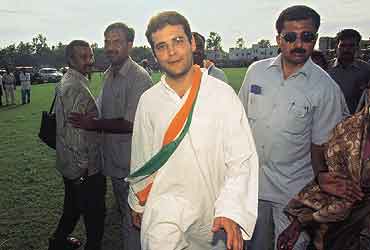 Congressmen who interact with Rahul often say he is very much like his father Rajiv Gandhi. "He's techno-savvy, data-hungry, very modern in his outlook," claims a party strategist. Youth Congress chief Randeep Singh Surjewala finds him open-minded, down-to-earth and committed. "He's innovative, a problem-solver and has a clear idea of what the Congress should stand for."

Rahul wears an air of gravitas. He doesn't smile as readily as his father did; in fact, he can look downright glum. He is taciturn to a fault, even-tempered and a patient listener. He's not given to the Priyanka kind of emotional displays. But friends say he has a great sense of humour and does not take himself too seriously. Unlike his sister and her husband, he's not a party person. He'd rather curl up with a good book than pay attention to page-3 socialites.