To Cut A Long Story 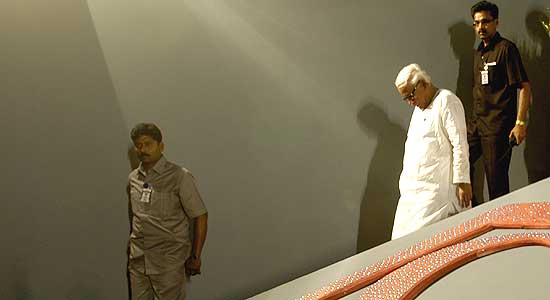 On November 6, 2009, West Bengal chief minister Buddhadeb Bhattacharya completed nine years in office. But into his tenth year at the helm, there were few celebratory hurrahs for the beleaguered CM. Parts of the state had virtually plunged into anarchy, with the Maoists enforcing their violent, if patchy, writ around Lalgarh. Before that there was Nandigram and Singur. And it is Buddhadeb who is being held responsible for it all. Not just by the opposition, but also by the people who, election after election,  starting from the parliamentary polls down to the panchayat and the just-concluded assembly bypolls, have made it clear that their verdict is against Buddhadeb and the CPI(M). Add to that detractors within the Left Front as well as his own party and Buddhadeb’s cup of woes brimmeth over.

If last week’s bypolls are any indicator of what might transpire in the next assembly elections, the CPI(M) has much to be worried about. The party drew a blank in the 10 assembly seats that went to polls. The CPI(M)’s loss has been the Trinamool’s gain, which won seven seats. Why, even Romola Chakraborty, widow of CPI(M) strongman Subhas Chakraborty, could not get the expected sympathy votes just a few months after his death—she lost the Belgachia assembly seat held continuously by her husband since 1977. Says former CM Siddhartha Shankar Ray, “If I were Buddhadeb Bhattacharya, I would resign today. Bengal’s problems have to be solved. I have spoken to Chidambaran and I have expressed my concern. I have told him that the imposition of President’s rule in Bengal should be considered.”

“If I were Buddhadeb, I would have resigned. I told Chidambaram that President’s rule should be considered here.”
S.S. Ray, Former West Bengal CM

It was not always like this. In 2006, there was much praise for Buddhadeb’s personal integrity and accolades for his vision for a modern, industrial Bengal. A sprawling information technology campus was set up in Salt Lake in Calcutta’s outskirts and attracted the likes of Infosys and Wipro. The CM wooed industrialists with the promise of a “positive investment environment in West Bengal”. Among those who considered the Bengal option was Tata Motors, which was to set up the small car factory in Singur. And then there was the chemical hub to be set up in Nandigram. “At that time, we were all very hopeful that Buddhadeb Bhattacharya was going to lead Bengal into a state of prosperity and peace,” writer Sunil Gangopadhyay told Outlook. A long-time friend and supporter of Buddhadeb, he, like many others, became critical of some of the CM’s policies, especially the ham-handed manner in which Buddhadeb went about the business of land acquisition for setting up these industries. “We always pinned a lot of hope on him,” Ganguly added, “There was never any doubt about his impeccable personal integrity. He was committed to the cause of Bengal and he had a vision. He started well, but then he committed many mistakes.”

The downward slide began with Singur in 2006, when the West Bengal government even resorted to imposing Section 144 to prevent protests against the forceful appropriation of land for the Tata factory. The government cited the Land Acquisition Act of 1894 to justify the takeover, claiming land could be commandeered by the state for the larger good even from unwilling farmers.

It is then that Mamata Banerjee, who had been looking for an entry point to destabilise 32 years of Communist rule in Bengal, stepped in with her anti-land acquisition movement by organising the people of Singur. The state reacted by unleashing the police on them. Later, the rape and murder of an 18-year-old girl, Tapasi Malik—who was burned alive on her own farm land, allegedly by CPI(M) goons, after she had vehemently protested its forcible acquisition—was highlighted by Mamata’s Trinamool Congress during the 2009 Lok Sabha elections. The drubbing in those polls was the first major manifestation that Buddhadeb had ushered in the beginning of the end for the CPI(M) in Bengal.

“Buddhadeb was committed to the cause of Bengal; had a vision. He started well, but made many mistakes.”
Sunil Gangopadhyay, Novelist and poet

But it was events in Nandigram, in March 2007, which made things worse for Buddhadeb. Police and alleged CPI(M) goons opened fire on unarmed protesters who were opposing the takeover of their land. Men, women and children were killed and injured in the attack. For the first time in decades, Bengal’s intelligentsia, traditionally supporters of the Left, turned against Buddhadeb. A group called Swajan, which included eminent scholars, filmmakers, theatre personalities and artists, wanted the CM to apologise for Nandigram. Not only did Buddhadeb fail to express any real regret, he paid scant heed to the demands for his resignation. Even his own Left Front partners openly criticised him, distancing themselves from what Kshiti Goswami, leader of the Revolutionary Socialist Party, described as Buddhadeb’s “arrogance.”

By the time matters deteriorated in Lalgarh, soon after Buddhadeb and central ministers Ram Vilas Paswan and Jitin Prasada escaped a landmine blast in Salboni in November 2008, the CM had become inured to the criticism around him. He went about his business almost oblivious of well-meaning advice. And as paramilitary forces rolled into West Midnapore in June 2009 to take on the Maoists, the CM didn’t even have the mindspace left for the argument that “development is the real solution”.

Hemmed in by criticism from all quarters, Buddhadeb is now a shadow of the man he used to be. The talk in party circles is that he may not be the chief ministerial candidate when Bengal goes to the polls in 2011.

Over The Great Wall, The Mire