To Chase A Moutain Rat 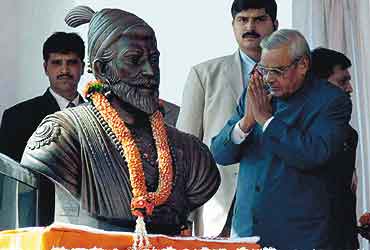 "Sharad Pawar, you are a blot on the Maratha community, you were born into Shivraya's (Shivaji Maharaj's) community by mistake."

"The Shiv Sena has commercialised Shivaji, theirs is a sham commitment. Thackeray was present at the Mumbai rally when Prime Minister Vajpayee publicly opposed the state government's ban on Laine's book. Why did he keep mum then?"

The pre-election war of words between traditional rivals in Maharashtra is in full swing. The race is on to prove loyalty to Chhatrapati Shivaji Maharaj, the Maratha ruler who, according to both imperialist and nationalist historians, "created an altogether new order of things" in 17th century India. Shivaji's worldview, they say, was large enough to embrace all religions and castes. Nearly four centuries later, uneasy caste equations between Marathas and Brahmins are underpinning the Shivaji debate. The slugfest between Thackeray and Pawar has a socio-political edge that's hard to dismiss.

Put Shivaji, caste tensions and elections into the political cauldron. It's a recipe for controversy, brittle talk and extreme positions as are now evident in Maharashtra. For decades together, a majority of the Marathas, who wield real political and economic power, stuck to the Congress while the Shiv Sena declared itself the true inheritor and torchbearer of Shivaji's legacy. Now, the fight is open on both counts: the Marathas, who comprise about 38 per cent of the state's population, are spreading their loyalties across the political spectrum while the four-year-old NCP is also, predictably enough, trying to root itself in Shivaji's legacy to give itself a local identity. A battle was inevitable. The US-based researcher, James W. Laine, unwittingly provided the ammunition that the NCP was looking for by writing a book in which he echoed some questions about Shivaji's parentage.

While politicians of every shade are quick to train their sights on those who, like Laine, speak ill of the Maratha warrior, no one wants to come on record and state the fact that his or her party is using Shivaji to woo voters. Saying this would be blasphemous, perhaps suicidal.

But the truth is that in a re-mapping of the political terrain, the NCP is keen to wrest some of the Shiv Sena's ground. The NCP workers have had the most bitter and bloodiest of quarrels with their Sena counterparts in Konkan and other places over the past four years. It's clear the NCP wants to cast itself as a pro-Shivaji, pro-Maratha party in the long run, which in Maharashtra is an enviable combination. When Pawar split from the Congress, the Maratha lobby dominant in western Maharashtra chose him over Sonia Gandhi's Congress.

But for Pawar's party, it isn't enough. It wants to emerge, over the next few months, as the true inheritor of Chhatrapati Shivaji's legacy, one thing that it believes will at once provide it with a huge political advantage, pare down the Shiv Sena and consolidate the Maratha vote behind itself. Says a political observer: "The NCP has cleverly centred the controversy on Laine. The Congress banned the book and scored its brownie points. Now, the NCP is calling on Interpol to arrest Laine—all of which sends out a message that they are upholding and protecting Shivaji's legacy more than the Sena. It's a game of changing perceptions and the NCP seems to have succeeded so far."

Among the Sena rank and file, there's confusion and regret that the party did not take the expected hard line against Laine's Shivaji—A Hindu King in Islamic India.In fact, when Shiv Sainiks blackened the face of eminent Maratha historian S. Bahulkar and threatened others of his ilk, Raj Thackeray apologised.Intellectually, it was the right thing to do. But for Sena insiders, the apology was almost harakiri. It meant weakening their image as guardians of Shivaji's legacy. Further, Pawar's observation is correct. Thackeray did sit on the dais even as Prime Minister Atal Behari Vajpayee opposed the book ban. This was a totally unacceptable position for the Shiv Sainiks, who give the most prominent place on the walls of their homes and offices to Shivaji portraits.

Not to be left behind in the Shivaji legacy race, the state BJP forced Vajpayee to reverse his position on the ban and unleashed a new controversy about unwelcome references in Jawaharlal Nehru's A Discovery of India. NCP leaders smile when asked if the Laine controversy was a trap set for the Shiv Sena-BJP. Trapped or not, the allies are on the backfoot.

In Mumbai and Pune, you can't even inquire about Laine's book, it's akin to blasphemy. Laine, an American professor of religious studies in a Minnesota college, included a few references about Shivaji's parentage that he later defended as "naughty jokes told to him by Indians". Laine has since apologised. He now doesn't talk about the controversy but he had earlier said: "I foolishly misread the situation in India and figured the book would receive scholarly criticism, not censorship and condemnation."

The debate about Shivaji's biological father was settled decades ago by eminent Indian historians, it did not need a Laine, circa 2003, to do the job. But in an election year, at a time when the socio-political moorings of the state are shifting, Laine's references became incendiary. In the surcharged atmosphere, the voices that should have been heard on the issue have muted into the background. Marathi and English historians who spent their lifetimes studying Shivaji are mortally afraid to say their piece.

Among them is Pune-based A.R. Kulkarni, who at the age of 80 edited Ajnapatra, a volume on the royal edict of Shivaji, in January this year. Kulkarni will not speak his mind. B.G. Mehendale, whose two volumes on Shivaji are considered significant, tore up the manuscript of his third volume in disgust when Bahulkar was attacked. He won't talk either. In Mumbai, the Maratha Mandir was well on its way to launching the second of its three-volume treatise, edited by historian Y.D. Phadke. The launch has since been postponed.

Shivaji has been the subject matter of history for centuries. The first few volumes on him and his empire were written by British historians. But this history was always at variance with what was being written in Marathi. In the early 1900s, nationalist historians began writing about Shivaji and his rule in English. Among these, Sir Jadunath Sarkar's Shivaji and his Times is considered a standard text. 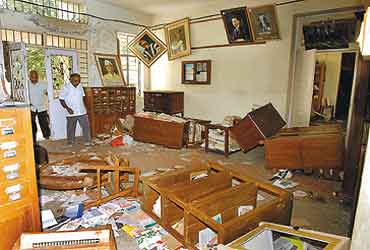 "It was always a difference of perspective. The imperialist history offers an image of Shivaji. The nationalist history credits him with having created what's called a wholly new order of things. But almost all historians have called him a genius," says Prof J.V. Naik, former head of history department, University of Bombay. And where does he place Laine? "Laine's title itself is wrong and mischievous. There's no reason to take Laine so seriously, he has little credentials to write on Maratha history," says Naik. But he, and others who spoke off the record, say Laine's work is absolutely no justification for the Bahulkar and Bhandarkar Oriental Research Institute episodes.

History is continuously rewritten in the light of new evidence. In fact, this happened with Maratha history when nationalist historians, both in English and Marathi, began re-framing Shivaji's life differently, more sympathetically, from what the British had done. Now, caste equations fuelled by politics are forcing the re-examination of a portion of the nationalist perspective on ShivajiThe new axis of the Shivaji debate is the Maratha-Brahmin one. Almost all historians who studied and wrote about Shivaji happened to be upper caste, a fact resented by come-lately outfits like the Maratha Seva Sangh and Maratha Mahasangh.

The Maratha Seva Sangh was formed in August 2002 at a two-day convention of Marathas at Tuljapur, dedicated to Goddess Tulja Bhavani, whom Chhatrapati Shivaji worshipped. Led by Purushottam Khedekar, whose wife is a BJP MLA, the objective of the outfit was to establish a new religion called "Shiv dharm", because the authentic form of the religion "is not being followed by any organisation presently". The outfit has mainly targeted scholars and historians, Brahmins by birth and name. The Bhandarkar Institute too is considered upper caste.

Points out Aroon Tikekar, historian and newspaper editor: "We must condemn the vandalisation and the attacks but we cannot altogether ignore their view. Their rage is really against the upper-caste version of Maratha history and Chhatrapati Shivaji, which is undeniably sympathetic to Shivaji but has its own viewpoint. In fact, most historians have called Shivaji a genius but there's a contemporary Maratha element that wants to revisit it. But to do that, they don't have to threaten anyone." What history scholars like him rue is that intellectual rigour has been replaced by physical violence, fuelled by politicians.

To social scientists, this appears a polarised society—Maharashtrian intellectuals and historians on one side and resurgent Maratha organisations on the other backed by politicians of all hues. In polarised debates, there's no middle ground; there is only distortion or invention of material to attack perceived opponents. Watch how far we have travelled in the business of elections: in 1956, when Pandit Nehru was invited to unveil Shivaji's statue at Pratapgarh fort, long after he had apologised for his remarks on the Maratha king, he declined because "it did not seem proper to tie it up with elections". Nehru did not want to be seen invoking Shivaji to woo the Maratha vote. Election 2004 in Maharashtra, on the other hand, is remarkable for its invocation, rather blatant use, of the Shivaji legacy.