To Bridge The Gulf

Despite Gujarat, the mood in the region is ripe for an enhanced political engagement 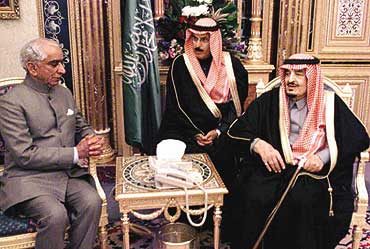 It was New York Times columnist Thomas Friedman who had asked this provocative question. An Arab response to it came from respected journalist Amir Taheri writing in the Arab News. "The latest round of killings started with the massacre of 60 Hindus by militant Muslims in Gujarat," Taheri wrote, adding that "the Government does not conduct the killings in India."

Taheri was indeed making a fine distinction between Israeli action in Palestine and the Gujarat violence. But he didn't stop at that. "Gujarat is not an occupied territory.... (The) fight in Gujarat is an internal Indian tragedy. The fight in the occupied territories (is) a colonial conflict," argued Taheri. He then made a telling extrapolation: "During the past year or so, Israel has killed 1,100 Palestinians and wounded a further 7,000. Relative to the total population in the occupied territories that is the equivalent of killing 110,000 and injuring 700,000 Muslims in India, assuming that there are 120 million Muslims in the country. In other words, Israel is killing far too many people among a relatively small population." What's more, Tahiri did not chide India even once.