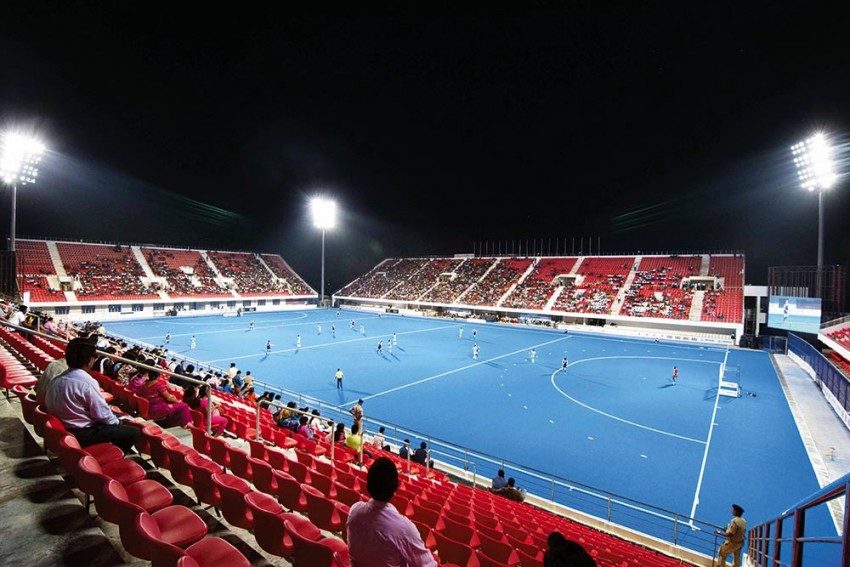 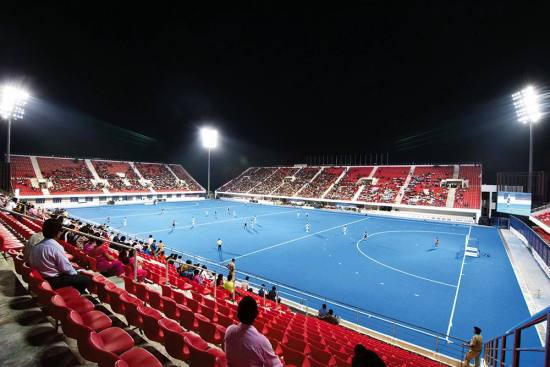 It will be the biggest, and grandest, hockey World Cup ever. As many as 16 teams, inc­luding host India, will be competing for the gold-and-silver trophy standing 650 mm tall and weighing 11,560 gms. And, going by the preparations afoot in host city Bhubaneswar, the event is going to be the most colourful, too, of the 14 previous editions. From the 14,800 seats—painted incarnadine—of the Kalinga Stadium to its ‘signal blue’ artificial playing surface, the Odisha capital is soaked in colours splattered from an orderly paintbrush. All that has come at a cost to the Odisha exchequer—Rs 82.5 crore, the tournament’s budget.

The slow drumbeats leading up to this spectacle worthy of its name cast its net farther than at fans of a marquee tournament, or the famously passionate fans of the sport in Odisha. Of course, the state government, Hockey India and the Inte­rna­tional Hockey Federation (FIH) do want to harness, and encash, Odisha’s rich sports culture—fan zones, with giant screens on which matches will be shown live, are being installed in all 30 districts. The Odisha Tourism Development Corporation, headed by former India hockey captain Dilip Tirkey, is also keen to cash in on World Cup tourists. Even a sports literary festival, which attracted some very prominent sportspersons, like athlete Ben Johnson, cricketer Jeff Tho­­mson, hockey legend Ric Charlesworth and Oly­­mpic swim champion Stephanie Rice, was organised as part of the build-up. This is a high-profile global event held in Odisha, and chief minister Naveen Patnaik is determined to make a show of it. 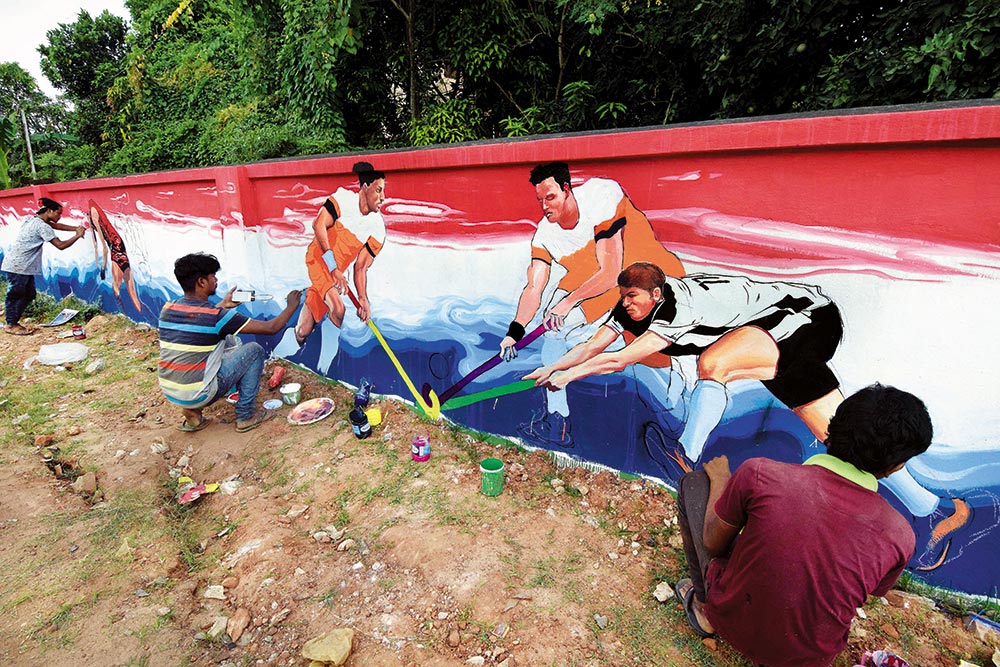 Murals being painted in Bhubaneswar

Naveen, say experts, has a lot at stake: the World Cup, mind you, comes just months before assembly elections in Odisha. And he would certainly use the goodwill generated by a popular World Cup for political gain.

The World Cup’s budget is Rs 82.5 crore, to be borne by Odisha. Detractors say Naveen will use the event for political gain.

But there are deep rumbles within Odisha. Thousands of distressed farmers, under the banner of the  Navnirman Krishak Sangathan (NKS) have been on a protest march to  Bhu­ba­neswar, demanding “price, prestige and pens­ion”. Over the past week, hundreds were arrested and Section 144 of the CrPC imposed on a stretch of the highway to break their resolve. “The government is spending crores on the Cup and on sponsoring the Indian team. It’s nothing but image-building ahead of polls. If farmers hold a rally in the city, that will be aff­ected,” says filmmaker Amiya Pani. “We’ve no problems with the World Cup,” says NKS convenor Akshaya Kumar. “But to avoid adverse publicity, the government has unwi­ttingly courted it by blocking us from holding a rally.”

The onfield action in the World Cup begins on November 28; the final will be played on December 16—all under flo­o­dlights and on the newly-laid Poligras MegaTurf CoolPlus EL15 at the Kalinga Stadium. All matches will be played in the evening.

World No. 5 India, naturally, is the cynosure, and local fans have snapped up all the tickets of the team’s three group matches against Belgium, Canada, and South Africa. Why, even a warm-up series between the Odisha and the visiting New South Wales teams was a success.

A high-octane clash between India and Pakistan, placed in different groups, could take place in the second round, the quarterfinals or later. The last time India met Pakistan in Bhubaneswar, in the 2014 Champions Trophy semis, the visitors won 4-3, but two Pakistani players were suspended and barred from the final for their boorish behaviour after the encounter. This time, the security around the Pakistani team will be beefed up, says Rajender Prasad Sharma, Director-General of Police, Odisha. “We’ll deploy additional security with the Pakistani team and at their hotel,” Sharma tells Outlook. 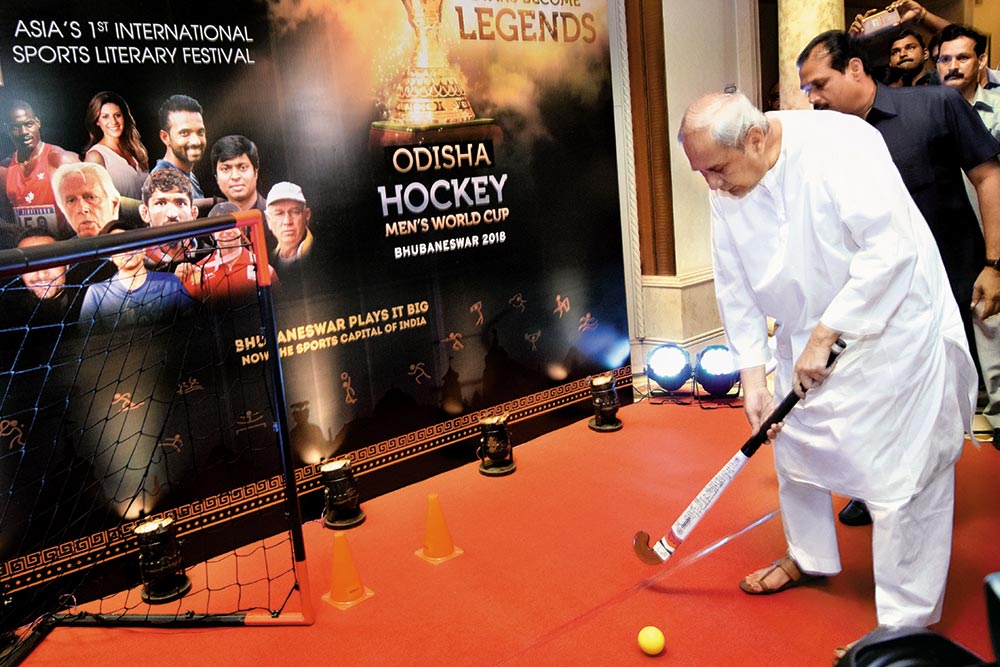 CM Naveen Patnaik at the inaguration of the sports litfest

On the field of play, the World Cup would be a resounding success, feels Dilip Tirkey. “With the World Cup, awareness about the sport will incr­ease. Hockey lovers in Odisha usually throng stadia in hordes; at no other venue in the world do fans come from such far-flung areas,” Tirkey, who comes from the hockey nursery of Sundar­garh in Odisha, tells Outlook.

Prabodh Tirkey, a former India mid-fielder and Dilip’s teammate, agrees. “World Cup is a big event. As a youngster, I never watched one. The sports hos­­tel boys here are excited. This tournament will act as a big motivation for them. They’ll learn tricks like how to dodge opponents…,” says the former India captain.

The World Cup caravan will take flight with a colourful opening ceremony. “It will be a grand event, lasting about one-and-a-half hours. Musi­cian A.R. Rahman, among other well-known art­istes, will perform. Shahrukh Khan will deliver a speech. There will also be a story-telling session, and storytellers from around the world will spin their yarns. About 600 volunteers will serve the tournament,” says Vineel Krishna, an organising committee member and director in the sports and youth services department, Odisha.

For the players, artistes, tourists and mediapersons from across the world, a grand welcome in typically warm Odia style, bedecked with flowers and steeped in the traditions of a millennia-old culture, is in store. Moreover, Bhub­­aneswar is preening up too—as part of beautifying the city, sports-related murals/graffiti have come up on walls and boundaries, new foot overbridges and bus queue shelters (BQSs) have been erected and roads are being repaired.

The Capital Region Urban Transport of Bhu­baneswar will start a passenger-friendly city bus service before the tournament, besides launching a mobile app to help people book tickets and receive information about the locations of the new BQSs. In short, Bhubaneswar is gearing up for the World Cup as a city would do for a Commonwealth Games or an Asiad, but perhaps on a smaller scale.

However, as with any event of this scale, there are detractors sniping at one’s heels. It’s being said that preparations have missed a few deadlines, but Krishna says the recent, unseasonal rains hampered work. “We lost 30 to 40 working days due to 30 per cent more-than-average rainfall in August-September,” he says. Indeed, in July, Odisha Dis­as­ter Rapid Action Force personnel had to rescue people in boats from low-lying areas in Bhub­an­eswar after two days of heavy rain. With traditional drainage choked due to encroachment and illegal construction—that modern blight of urban India—even a short burst of rain jeopardises normal life. The World Cup preparations did, however, brave the generous lashings of cyclone Titli in October.

If the heavens were to interfere now, it would be to reveal acres of blue sky and clear, mild winter nights. Bhubaneswar deserves such perfect festival weather.

By Qaiser Mohammad Ali in Bhubaneswar with inputs from Sandeep Sahu

Home-Grown, Home-Slain: Why Militants In Kashmir Are Being Killed Near Their Homes