For Indian diplomats, the B-word is a rich source of future trouble 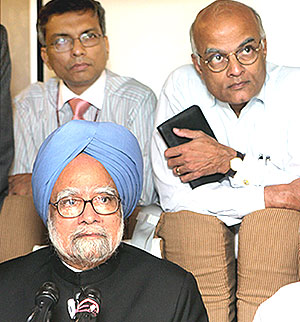 The Indian diplomatic corps remain palpably confused, frustrated and disappointed even a fortnight from July 16, the day Prime Minister Manmohan Singh and his Pakistani counterpart, Yousuf Raza Gilani, issued the controversial joint statement at Sharm el-Sheikh, Egypt. The disquiet among serving diplomats stems from two key elements in the official text—the delinking of action on terror from the resumption of the Indo-Pak composite dialogue and the inclusion of Balochistan, for the first time ever, in an Indo-Pak joint statement. “There’s a sense of shock and confusion among a large number of Indian diplomats,” says a senior foreign ministry official.

Their dismay and confusion didn’t ebb even after the prime minister’s reply in Parliament on July 29. Manmohan insisted there was no dilution of India’s stand on terror and normalisation of relations with Pakistan could only begin after Islamabad takes urgent and verifiable steps against the perpetrators of 26/11. His reply prompts former foreign secretary Kanwal Sibal to quip, “The prime minister has stuck to his position and we have more reasons to worry than before.”

Sibal’s feeling has an echo among serving diplomats. What worries them isn’t the delinking of action on terror from the composite dialogue, subject as it can be to varying interpretations. (India does not want to initiate dialogue unless the Mumbai guilty are punished. Pakistan disagrees.) It’s rather the prime minister’s failure to provide any credible explanation for accepting Pakistan’s demand for including Balochistan in the joint statement. Their fear: New Delhi’s future insistence on Islamabad taking action against terrorists is likely to goad Pakistan into demanding that India should stop fomenting trouble in Balochistan. “To say our hands are clean may be a moral position, but it is definitely not a diplomatic one,” Sibal remarks sarcastically to Manmohan’s assertion in Parliament that Balochistan was included in the text as India had nothing to hide and its hands were clean.

So deep is the disquiet that the telephones in South Block haven’t stopped ringing since the joint statement was issued. Even some journalists covering foreign affairs have been flooded with calls from Indian diplomats posted abroad, eager to know why Balochistan was included and quite convinced it is a blunder likely to haunt India for long. “The real damage of this will be felt not at international or regional seminars, but at the chanceries in different parts of the world,” a senior Indian diplomat serving in the Gulf told Outlook. He and others feel they will be hard put to counter Pakistan’s future offensive against India’s role in Balochistan.

Interestingly, the ire of diplomats is directed not so much against Manmohan as it is against their bosses, particularly outgoing foreign secretary Shivshankar Menon, who was present at Sharm el-Sheikh. They wonder how a diplomat as competent as Menon failed to see the ramifications of the ‘B-word’ in the official text, irrespective of the benign language deployed. They strike notes of disbelief: did the PM’s advisors spell out the negative impact the B-word would have on India’s diplomatic dealings with Pakistan? Sibal speaks for the diplomatic corps when he says, “Had I been foreign secretary, I’d definitely have brought it to the notice of the political leadership. Unless, of course, Menon agreed with the text and felt it could be defended.”

A large number of Indian diplomats, though, feel the inclusion of Balochistan has put India in a spot. It wasn’t as if India was caught unawares, for Sharm el-Sheikh wasn’t the first instance of Pakistan trying to bring in Balochistan in its dealings with India. It has often accused India’s Research and Analysis Wing (RAW) operatives of financing, training and arming Baloch leaders rebelling against Islamabad. “Even in the early 1990s when we were busy defending our stand on Kashmir and highlighted the cross-border terrorism that was being sponsored by Pakistan, someone or the other—obviously on Pakistan’s instigation—would ask about India’s role in Balochistan,” recalls a senior Indian ambassador about his posting in London. Despite the pressure on India, he says he and other diplomats never allowed Pakistan to acquire the “moral equivalence” with India by raising Balochistan, a position feared to have been eroded post-Sharm el-Sheikh.

Some say India’s position on Balochistan has been marked by confusion. In stark departure of not commenting on the internal affairs of another country, South Block reacted to the killing of Baloch leader Nawab Akbar Khan Bugti in August 2006. Not only did India pay rich tributes to the slain leader, it noted with concern, “The heavy casualties in the continuing military operations in Balochistan underlines the need for a peaceful dialogue to address the grievances and aspirations of the people of Balochistan.”

This statement, say foreign officials, was aimed at putting Pakistan on the defensive as a counter to its campaign against alleged human rights violations in Kashmir. This has prompted a few to ask: could the same logic be at play behind the decision to include the B-word in the joint statement? In other words, India could exploit the mention of Balochistan in the statement for future diplomatic manoeuvres. However, this argument doesn’t wash with many who feel it was a concession to Pakistan to keep it focused on talks—and taking action against the perpetrators of Mumbai.

“Time and again, since Tashkent in 1966, we have handed over concessions in negotiations out of a sense of goodwill. Each time subsequent events have brought us back to the starting point,” former Indian diplomat K.C. Singh told Outlook. “Concessions must be linked to irreversible counter-steps by Pakistan which in the present case relate to uprooting the anti-Indian terror network.”

The confusion among Indian diplomats is likely to spill out during the brainstorming session of heads of Indian missions abroad, scheduled to be held in Delhi between August 24-26. Last year, they had met in the aftermath of the Mumbai terror attack. This time round, they’d definitely like to find some answers to where they stand vis-a-vis Pakistan.