Tillers Of The Good Earth

Two years ago, they began organic farming. Now they're spreading the knowledge to the locals. 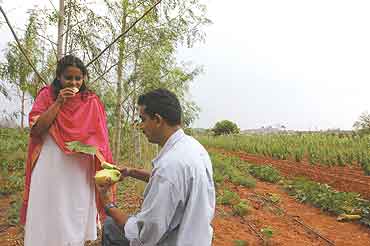 It was in 1987 that Raghavendra Rao and Shylaja Rao met Masanobu Fukuoka, the patron saint of natural farming. Fukuoka, author of One Straw Revolution, a book that served as a principal catalyst of alternate thinking for young minds across the globe, had come on a visit to their university—the Salim Ali School of Ecology and Environmental Sciences in Pondicherry. The Raos were among the first batch of students, studying for an MS in ecology. And during that decisive moment of contact with Fukuoka, they quietly resolved that one day they would have an organic farm of their own.

After spending 15 long summers earning a livelihood and also conserving resources to realise the dream, they began cultivation on their farm of 27 acres, Oasis, in Nakkanapalli village of Kuppam in Andhra Pradesh, in July 2003.

To begin with, the Raos have restricted organic farming to just 4 acres on Oasis, lest the whole project becomes "unwieldy" and "impractical." Although they plan to grow a variety of fruits later ("a polycultural orchard") they are confined to musk melons for now, but grow a good number of vegetables that include cucumber, radish, spinach, okra, capsicum, baby potatoes, jalapenos, baby corn, bitter gourd, cherry red tomatoes, ridge gourd, zucchini, french beans, chilli sweet banana and drumsticks. "The normal impression about organic farming is that you are going back a 100 years, but it’s not so, especially if you are trying to make it commercially viable. It’s actually a blend of natural principles of ecology and modern technology. This makes it a very knowledge-intensive activity," says Rao.

The example set by the Raos has had its impact on the villages in and around Oasis where farmers still grow paddy, which is water-intensive, in a drought-prone area. "They have watched us in the last couple of years and feel confident to shift to...