Tied In Notes Of Amiri Todi

Amjad Ali Khan’s recollections of 11 great classical musicians do have well-known details, but his anecdotes are lit up by a sense of ‘ethereality’ 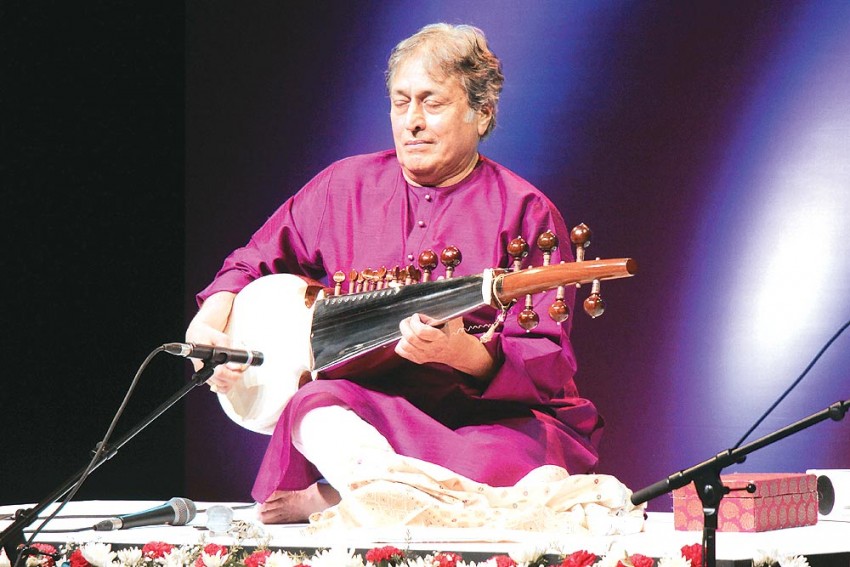 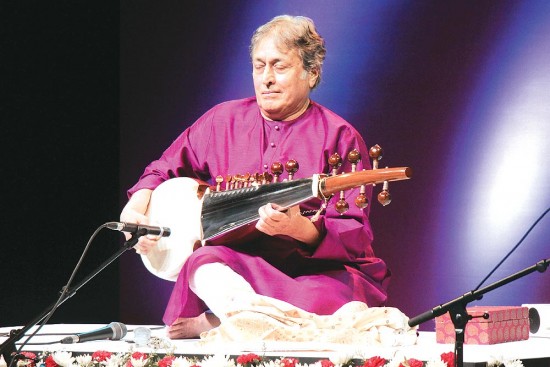 A discerning sentence in the initial pages goes thus: “I believe in being traditional, not conven­tio­nal”. Amjad Ali Khan then goes on to explain the difference in the long introductory note, and tacitly reiterates it in the subsequent chapters on a dozen exponents of Ind­ian classical music in the 20th century.

While referring to Bade Ghulam Ali Khan, the author notes that the Patiala gha­­rana vocalist believed the audience would not appreciate overly long compositions. Much later, in the penultimate chapter—on Kumar Gandharva—Amjad Ali counters a popular notion that the prodigy-turned-icon was a non-conformist. Modernising without losing the sup­erstructure is, to the sarod maestro, defying convention, while upholding tradition. He cites an early 1980s incident as an inst­ance. When Amjad Ali recorded an album of short pieces, he was flayed for the ‘capsules’. To him, the challenge was to distil the essence of a raga in a short time, as “after maybe an hour it was all repetition”. That’s why, the idea of ‘ext­ended’ compositions didn’t go well with Ghulam Ali and “Kumarji rightly believed that tradition is the ever-flowing river into which you never step twice”.

Master on Masters constantly gives a peek into the Gwalior-born author’s aesthetics about music amid reminiscing about 11 Hindustani and a Car­natic titan. Yet, the 71-year-old sarodiya tends to repeat well-known basic details, when the average reader would be eager for anecdotes. Some of them the book does offer are interesting.

The author recalls Amir Khan (1912-74), the famed vocalist, singing after his short concert at the official residence of A.N. Jha, Delhi’s first lieutenant-governor. Amir, typically, “sang for himself” and realised at one point the hall had no one, except his accompanists and Amjad Ali! A couple of years later, in 1971 in Calcutta, Amir magnanimously ignored protocol and let his gaayan be succeeded by Amjad Ali, who happened to arrive late. When the vocalist died in a car acc­ident three years later, a heart-broken Amjad Ali composed a raga: Amiri Todi.

‘Ethereality’ is one thing the sarodiya can impulsively sense in music. The ustad was in his car when a woman singing on the radio sounded ‘spiritual’. He parked the vehicle by the road, and it did eventually confirm his suspicion: the end-concert announcement said the piece was by M.S. Subbulakshmi. Visits to the Carnatic doyenne’s Chennai house used to be laced with the anticipation of filter coffee, but once what the guest got in the tumbler had a different taste. “It’s Horlicks,” she said, amused by Amjad Ali’s facial reaction. “Good for health.”

Up north in Varanasi, shehnai legend Bismillah Khan chose to skip his namaaz one morning, listening to Amjad Ali on stage. “Sangeet bhi toh ibadat hai (music, too, is devotion),” the piper said, recalling the episode years later at Chennai, where he was to receive an award in the name of the author’s father, Haafiz Ali Khan, the renowned sarodiya whose name frequ­ently finds reverent mention in the book.

Deaths of some musicians come with drama. In 2011, Amjad Ali was at Pune, where he met an ailing Bhimsen Joshi. The Bharat Ratna awardee—“who credited my father with teaching him the difference between the ragas Puriya and Marwa”—passed away the next day. Ele­ven years prior to it, Amjad Ali learned about the death of Alla Rakha. He rushed to the tabla maestro’s house, where master’s daughter, too, had passed away less than 24 hours ago.

In 1984, a wire service ran back-to-back interviews of Pt Ravi Shankar and Amjad Ali, leading the media to stir an imaginary story of a tussle between them. Soon, both were on tours abroad, and converged at Ottawa, where the sitarist wished to meet the sarodiya and thrash out the matter. It didn’t happen, for Amjad Ali “felt it was inappropriate on my part to have that kind of conversation with him”.

Amjad Ali’s first meeting with Kishan Maharaj was at his concert, where the tabla great accompanied him at his nat­ive Varanasi. Thirty years later, in 1993, Maharaj was to play for Amjad Ali’s sons, Amaan and Ayaan. Kesarbai Kerkar, the author recalls, was “choosy about concerts”, while “evergreen diva”, Begum Akhtar, sang with simplicity—“the most difficult” of achievements.

A big honour, Amjad Ali believes, came to him from Vilayat Khan. At Delhi in 1994, the sitarist strayed from raga Shree to Pilu—and attributed it to an Amjad Ali hangover. For, Vilayat had listened to the sarodiya’s Pilu at the same venue the pre­vious evening. Not surprisingly, the author says he prefers live recording to that in studio. For, ragas are “a matter or mood” or “the time of day”.

As You Queued Up Quietly