Women over 40, it's time to pause and address your health. Here's where to look out. 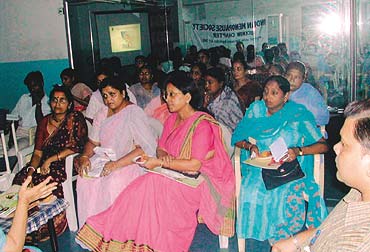 outlookindia.com
-0001-11-30T00:00:00+0553
Women spend one-third of their post-menopause life battling problems and diseases. There are 65 million women in India over the age of 45, and most do not understand the changes taking place in their bodies as they cross their mid-40s. They suffer the trauma in silence. Many find it embarrassing to discuss the problem. And it is not just overall physical discomfort that is involved—menopause can lead to problems like osteoporosis, risk of cancer and cardio-vascular diseases.

It was in 1995 that a group of doctors took stock of the situation. They felt there was little information available about health issues relating to menopause, which in some cases sets in as early as 35-38 years. In fact, many medical practitioners and healthcare providers too have a sketchy idea of the problem. Thus was started the Indian Menopause Society (IMS) to provide a forum to create awareness about women over 40. From a small effort, the Society has spread to 15 cities and now has 2,100 members. It includes both medical practitioners and others. People from different specialities—gynaecologists, cardiologists, ultrasonologists, eye surgeons, and orthopaedics too are part of the body. The aim is to tackle the problem in a coordinated manner. "It is turning out to be a big challenge to create awareness about the issue. Not only do the women have to be sensitised, but also the general physicians, who do not know much about the problem,’’ says infertility and IVF expert Dr Sonia Malik, president elect of the society.

The IMS educates women by organising workshops, holding charitable screening camps and offering heavily subsidised or free tests, including mammograms, ultrasounds and pap smears. The society has also been distributing pamphlets to reach out to the middle class, lower middle class and poor sections of society.

But it’s not just the poor who need attention. According to IMS activists, even educated women don’t spare the time to go and get themselves screened and tested. The society’s last camp in June was aimed at government school teachers and office clerks. Held at a women’s hostel run by the All India Women’s Conference in New Delhi, more than 400 women attended it. They were screened and some underwent tests. Another camp, to screen for breast and uterine cancer, was organised at Delhi’s Sant Parmanand Hospital on May 14, Mother’s Day. More than 250 women from the slums underwent free investigations, including mammography and ultrasound scans.

It’s not only lack of awareness that IMS is trying to address but also the lack of research and information available on the issue of women and old age. Statistics collated world-wide is cause for concern. Forty-two per cent of women who have heart attacks die within one year compared to 24 per cent of men. This could be because older women may have co-existing chronic conditions which have gone undetected.

According to Malik, there is very little data relating to older women’s health problems in India. "The Indian Medical Association runs an online course in geriatrics but it has very little about women and their problems,’’ she says, adding that IMS is also tying up with the ima to promote awareness.

One problem that IMS faces is that of support. "We have to tie up with other organisations to help us carry out our awareness and screening programmes. With women, and specially the aged, who are not high on the government’s agenda, it is difficult to get funds. At present, we are dependent on self-funding or on sympathetic organisations. India is well on its way of getting older with the average lifespan increasing. And by the existing statistics, women outlive men by five years. So it is time to sit up and take note of their health,’’ says Malik.