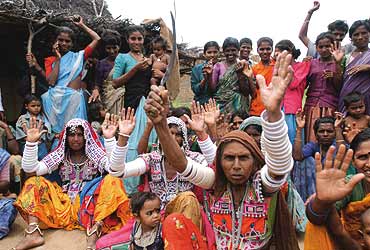 outlookindia.com
-0001-11-30T00:00:00+0553
At the end of the nuclear dream may lie the terrible reality of human and environmental waste. As the department of atomic energy (dae) desperately digs for new sources of natural uranium in Andhra Pradesh, the costs could be enormous. Having left a trail of deformed children and unexplained deaths of miners in Jaduguda, Jharkhand, the nuclear establishment is all set to spread the radioactive threat to hundreds of villages in the southern state. That is the fear which currently stalks anti-nuclear and health activists. They even warn against the impact on the twin cities of Hyderabad and Secunderabad.

The Uranium Corporation of India Limited's (UCIL's) hydro-metallurgical plant in Nalgonda district has attracted the ire of environmentalists who say its proposed open-cast mine abuts the massive Nagarjuna Sagar reservoir. It is feared that radiation- and heavy metal-contaminated storm water run-off from the uranium mines would find its way into the reservoir. This is likely to impact the entire downstream of the Krishna river basin which caters to over six districts.

The processing of the uranium ore mined at Lambapur-Peddagattu will be done 18 km away, in a mill at Mallapuram that sits 4 km from another water body, the Akkampally reservoir. The Andhra Pradesh government is laying huge pipelines along a 130-km route to supply water from this reservoir to Hyderabad-Secunderabad and 600 villages most of whose inhabitants are affected by fluorosis caused by excessive presence of fluoride in potable water. Having a tailings pond—where radioactive and chemical waste from the mines and the mill will be dumped—close to the reservoir can be dangerous, fears Ravi Rebbapragada of Mines, Minerals and People, an ngo working for people who inhabit areas with mines. A United Nations Environmental Programme report of 2001 lists 221 tailings dam "incidents" the world over.

The disaster called Jaduguda should serve as an eye-opener. Says M.V. Ramana, research staff member at Princeton University's program on science and global security: "In Jaduguda, uranium mill tailings have been used to construct houses and roads; UCIL authorities have not warned the public that these emit radioactive radon and are therefore harmful to health." According to the UN Scientific Committee on the Effects of Atomic Radiation, 70 per cent of the total radiation exposure to miners comes from radon emissions. Besides the tailings, the 'rock overburden'—the pressure of tonnes of rock piling up as a result of mining—poses an environmental problem.

In Jaduguda, the radon-emitting tailings pond was perceived as the key hazard to the villages that surrounded it. Till 1999, the tailings pond was not fenced off and people and animals used to even walk over it. A study conducted in 2000 by two medics, Sanghamitra and Surendra Gadekar, in the vicinity of Jaduguda showed that 8 per 1,000 was the incidence of TB in the normal population. But among the miners it was 80 per 1,000. Says Surendra: "Not all cases are actually of TB. Silicosis and lung cancer are occupational diseases that afflict uranium miners the world over. But UCIL chooses to term them TB." For, this allows it to blame the affliction on microorganisms rather than the noxious byproducts of mining.

The Gadekars' study also found a high incidence of congenital deformities: "There were 60 people with congenital deformities born near Jaduguda as against just 10 in otherwise similar villages. Living in the vicinity of a uranium plant is a sure invitation to producing deformed children. " The UCIL has, of course, consistently and strongly denied any link between low-level radiation exposure and the ill-health of the villagers. Says UCIL chairman and managing director Ramendra Gupta: "In Jaduguda, there's only one person with lung cancer and he is in the accounts section." The Bihar legislative council had constituted an environment committee to study the issue, which in its December '98 report recommended a minimum distance of 5 km between a UCIL establishment and human habitation.

However, the new mines at Lambapur and Peddagattu will be located along Adivasi habitations. The Lambadas of Lambapur oppose the "company people" in one voice. "At the primary school in Lambapur, one can study only up to third standard. To study further we've to walk 20 km to Nidmanur. Now they want to bring development by setting up a company that's a threat to our lives," says Ravindra Naik, the only person in the 1,500-strong village who's a matriculate. Says Surendra: "Throughout the world, from Canada to Australia to India, uranium mining is undertaken in areas inhabited by disempowered, indigenous people."

Uranium mining generates massive amounts of low-level radioactive waste. By the late '90s, India had accumulated an estimated 4.1 million tonnes of waste from mining and milling. In Lambapur and Peddagattu, 1,250 tonnes of ore, containing about 0.65 tonnes of U308, will be generated daily. This will be transported in tarpaulin-covered trucks along 18 km, on partly hilly roads, to the milling unit at Mallapuram. After the ore is processed into magnesium diuranate or yellow cake, the waste will be dumped in a tailings pond, 500 metres from the Mallapuram village with a population of about 1,500.

According to the US-based Institute for Energy and Environmental Research, "the mill tailings contain 85 per cent of the radioactivity of the original ore, along with heavy metals and toxic materials". The solid-liquid ratio in the tailings are roughly 40-60. The UCIL plans to mine in Lambapur-Peddagattu for 20 years and the tailings pond will accumulate millions of tonnes of radioactive waste. The half-life of the principal radioactive components of tailings—thorium-230 and radium-226—are about 75,000 years and 1,600 years respectively. Radium-226 decays into radon gas. In exposed mill tailings, radon emissions can be detected up to one mile.

Besides, the 1,000-acre core mining area falls under the Yellapuram Reserve Forest covered by the "buffer zone" of the notified Rajiv Gandhi Tiger Sanctuary. Once mining begins in Lambapur-Peddagattu, UCIL also intends to open up Chitrial, right in the middle of the tiger reserve. A. Madhusudana Rao, chief superintendent of the project, told Outlook: "Chitrial has good uranium reserves. We are trying to convince the ministry of environment and forests to allow us to mine there. We'll compensate by undertaking afforestation."

But if J. Rama Rao, a former navy captain who heads the Hyderabad-based Movement Against Uranium Project, is to be believed, "this is against the guidelines of the environment ministry for location of industrial and mining activities around the protected and ecologically sensitive areas, and the provisions of the Wildlife Protection Act, 1972, and Forest Conservation Act, 1980". The reserve is less than 6 km away from the proposed mining area and the law prohibits such activity within 25 km of a notified sanctuary.

Given the stiff resistance for the past 20 years from the Khasis of Domiasiat, Meghalaya, over starting a mine there, the UCIL is extra keen on the Andhra Pradesh project where mining and milling units will be set up at a cost of about Rs 500 crore. Says UCIL CMD Gupta: "Currently India produces 2,720 MW of power from our reactors. By the end of the Tenth Five Year Plan we hope to produce 4,020 MW and for this six pressurised heavy water reactors and two light water reactors are under construction. We already have 14 reactors. Soon, we will need fuel for all the 22 reactors. Hence we are going for expansion of mines." In India, less than 3 per cent of the power generated is from nuclear energy despite 50 years of investment. Reactors do not only produce electricity, they also produce plutonium for weapons.

The uranium available in India is of a very low grade. Officially, the average yield at the Jaduguda mines is about 0.067 per cent. In Lambapur and Peddagattu, the ore is expected to yield 0.052 per cent of U308. In countries like Canada where the yield of natural uranium is up to 20 per cent, they dump what India has been mining as waste. The price of U308 in the international market as of July 2003 is $23.90 per kg. Activists say if India were to import this uranium, it would save itself the dirty processes of mining and milling and, of course, crores of rupees.

However, that would not be possible since, as Gupta points out, "We have not signed the NPT and CTBT. In this regime of technological denial, we have to generate our own resources. Uranium will have to be mined in the national interest. Definitely, if we procure U308 from outside, it will be much cheaper." In Lambapur-Peddagattu, 155 tonnes of U308 is expected to be mined annually.

Gupta insists there are no stipulations against human habitations in the mine or mill vicinity. To convince the villagers that all was well in Jaduguda, the UCIL handpicked seven people from the five to-be-affected villages in Nalgonda and showed them around Jaduguda. This has worked. People in Peddagattu, where an underground mine is proposed, seem enthusiastic about the project. About the impact on health, R. Narayana, panchayat ward member from Peddagattu, says: "That may take some 20 years. Let's see when that happens." Radiation-induced cancer does take some 20 years to set in. But it may only be postponing a calamity. The clock is already ticking.