Tibet Is Our Best Card To Settle Borders With China

Unless shaken, Beijing will have no incentive to deal with the issue 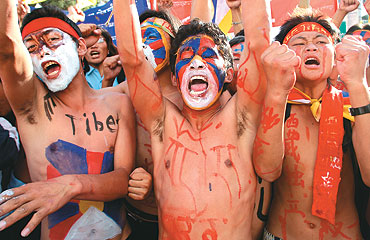 outlookindia.com
-0001-11-30T00:00:00+0553
The Chinese foreign ministry may have wanted Indian ambassador Nirupama Rao in Beijing to share its sleepless nights over the current Tibetan unrest—by summoning her at 2 am to lodge a protest over the recent breach of security of their embassy premises in New Delhi! To be fair, such an incident—involving a handful of Tibetans breaking into the embassy complex—would be a matter of serious concern to any government, and a formal protest would be in order. But as it involved no injury to person or damage to property, the decision to overdramatise matters by calling Rao in the middle of the night—and not wait for morning business to begin—would suggest that the Chinese wanted to make a political point. The intention seems to have been to browbeat India on the issue of Tibetan political activity on Indian soil and register a strong message that the Chinese could raise diplomatic temperatures should India fail to sufficiently curb Tibetan protests in New Delhi.

Ordinarily, an ambassador should respond to the summons of the host government. Diplomatic courtesy, however, requires that the ambassador of a sovereign country not be inconvenienced by being summoned at an unreasonable hour. Between friendly countries such conduct would be unthinkable. In conflict-ridden relationships, and especially during a crisis, diplomatic niceties are at times deliberately discarded by governments and the representative of a country is subjected to personal unpleasantness, to signal extreme displeasure or reinforce a tough political message or play to the domestic gallery.

If the ambassador be summoned at a patently untimely hour to meet a high political authority, diplomatic norms would still oblige him to go. He or she, if there's time, would naturally consider it prudent to inform headquarters about the summons and seek instructions, an exercise difficult to undertake in the wee hours of the morning, a point the host government has in mind when deciding on this kind of harassment.

However, if the summons is at the bureaucratic level, the ambassador is within his or her rights to convey an inability to go at the hour summoned and can suggest an alternative, more convenient hour. It is not clear at what level our ambassador in Beijing was summoned. If it was at bureaucratic level, why didn't she stand her ground? Ultimately, in these matters, it's a question of power equations, the instructions from headquarters, and the fibre of the ambassador.

While giving asylum to the Dalai Lama in 1959, India imposed the condition that he would not engage in any political activity on Indian soil. This amounted to removing the Dalai Lama from the Indo-China political equation. With hindsight, this was an error, unless we had assumed then that for India, at least, there was no Tibetan issue left politically, with Tibet having become an integral part of China.

In 1959, there may have been some logic in putting restraints on the Dalai Lama in the expectation of reaching a peaceful border settlement with China. But the 1962 conflict, the occupation of large tracts of Indian territory by China since then, and the enormous damage to India's security inflicted by China's policies towards Pakistan in particular should have convinced us to revise our thinking about the political utility of the Dalai Lama card.

Yet, for year, in communique after communique, we have reiterated our commitment not to allow the Dalai Lama to engage in political activity on Indian soil, and the Chinese have repeatedly expressed their appreciation of our position! The irony is that the Chinese claims on Indian territory are on Tibet's behalf, but the spiritual and temporal head of Tibet, who has sought shelter in India from Chinese arms, rejects these claims—and we are still unable to make any political capital out of this in our dispute with China because we have bound ourselves to keeping the Dalai Lama out of the equation.

Recently, the prime minister of the Tibetan government-in-exile, in an interview, accepted the MacMahon line as the border between Tibet and India, and hence the reality that Arunachal Pradesh is an integral part of India. If the Chinese were willing to settle the border issue by withdrawing to their own original claim line in Ladakh and not lay claim to areas in Arunachal Pradesh from where they withdrew in 1962, voluntarily ceding control of territory they had occupied, then the issue of the Dalai Lama would present itself differently.

As things are, the Chinese will neither settle the border issue with us nor have a serious dialogue on autonomy with the Dalai Lama, one which would permit his eventual return to Tibet and eliminate this problem from our bilateral ties with China. And yet they transfer the onus of their own misguided policies onto India and make the Dalai Lama's presence on our territory one of the reasons for keeping the undercurrents of suspicion and tension alive and not settle the border issue.

The current unrest in Tibet—and elsewhere in China where Tibetan populations reside—has revived the political issue of Tibet internationally. China has been virtually given a free hand in Tibet all these years by the international community. China's political system, despite the country's phenomenal economic growth and improved economic conditions in Tibet itself, has shown itself to be incapable of dealing with regional aspirations. The use of anachronistic ideological jargon by the Chinese leaders to attack the Dalai Lama reveals the gap between their economic thinking, which is open, and their political thinking, which is closed.

To say that the unrest has been promoted from abroad is to deny reality. Unless internal discontent is already high, it cannot be easily ignited with an external match. In any case, China cannot take the position that the Tibetan diaspora, which has fled China's repression in Tibet, has to be reconciled with the status quo and cannot seek to change it in order to better preserve the Tibetan culture, language, religion, traditions and society.

China has mesmerised the world in recent years with its striking economic success. It would have stepped out on the world stage in great glory in August when the Olympic torch is lit in Beijing. If Tibetan activists concluded that this was the best time for them to remind the world of the quasi-forgotten Tibetan cause, they were not tactically wrong. If, between now and August, incidents involving the Tibetans continue, whether in countries they live in or countries through which the Olympic torch passes, they could well induce some governments or sports bodies or individual athletes to register their disapproval of Chinese repression in Tibet in ways short of boycott.

The stark reality, however, is that vital economic interests of major countries are locked up in China and there would be great reluctance on their part to suddenly take strong confrontationist positions on an issue which they have themselves ignored in the past. Tibet is essentially an NGO issue in the West, not a hardcore political one.

Because the Dalai Lama and the Tibetan government are in exile in India, we cannot be insulated from Tibetan-related developments. The Dalai Lama would not like to embarrass the Indian government by stepping up Tibetan agitation on Indian soil. And yet, the largest concentration of Tibetans outside Tibet, clustered around the person who embodies Tibet's cause, cannot but keep the current unrest alive if any result is to be achieved. If the Tibetan issue gathers steam in the run-up to the Olympics—though at present it seems unlikely—India will face difficult choices, but it can ill-afford to make common cause with Beijing against the Tibetans and their aspirations, by clamping down on them here to China's satisfaction.

At one level, India may not want this issue to disrupt its ties with China; at another, unless Beijing is put on the defensive on Tibet and its authority there is shaken, China will have no incentive to deal with the border issue with us with any sense of urgency. India could discreetly help in promoting a productive dialogue between China and the Dalai Lama centered on genuine autonomy for Tibet. For this, China will have to change its policy of demanding India's cooperation in keeping the Dalai Lama in check and yet keeping its border issue with India unresolved. Beijing does this to keep in its hand a powerful pressure point on Delhi, compelling India to continue to seek China's goodwill so that its rise to global status is not impeded.

Talking To 'The Devil'