Mridangam can't be mridangam sans cowhide. The ban can slaughter its sound. 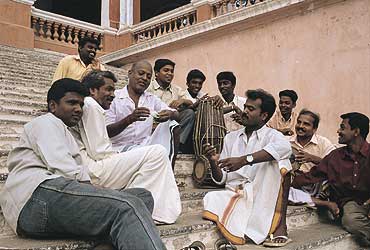 outlookindia.com
-0001-11-30T00:00:00+0553
Sogasuga mridanga talamu jatagoorchi ninnu sokkajeya dheerudevvado? Who is it that can beautifully sing your praise to the rhythm of the mridangam? Thyagaraja, the early 19th century bard, asks Rama in one of his 700-odd kirtanas. The Telugu composition in Sriranjani Ragam, much repeated in the concert circuit, always brings a smile to the lips of a mridangist. But it may soon disappear. The leather drum stands threatened by the prospect of a cow-slaughter ban about which the Congress momentarily was, and the bjp always is, enthusiastic.

While the nation has been debating the political and economic fallout of such a ban—the fate of beef-eaters, leather and beef export industries etc—there's an unintended consequence many are unaware of: Carnatic music will no longer sound the same. Cowhide forms a crucial element of the double-headed leather drum, which is to Carnatic music what the tabla is to Hindustani. And a ban would silence what Nobel laureate Sir C.V. Raman described as "the king of percussion instruments".

Mridangam-makers have always been Dalits and, in our era, frequently Dalit Christians. One such family, in fact, traces its roots right up to the time of Thyagaraja (1767-1847). Originally from Thanjavur, today most of them are settled in Chennai's Mylapore area, the nerve-centre of Tamil-Brahmin culture of which Carnatic music is a crucial part. Each of the three Veerabhadrasamy Koil streets here houses one mridangam-maker's shop. Yesudas, Aruldas, (the late) Gunaseelan and Johnson are brothers who have crafted and serviced the mridangams of almost every artist who matters. In fact, one brother camps in Mumbai twice a year to repair mridangams. From T.K. Murthy, Umayalpuram Sivaraman, Karaikudi R. Mani, T.V. Gopalakrishnan (TVG), Guruvayur Dorai, Mannargudi Easwaran and Srimushnam Raja Rao to the Canada-based Trichy Sankaran, each pro seeks them out. Just like the late Palghat Mani Iyer and Pazhani Subramania Pillai sought out Antony Sebastian (known as Setty), the father of these brothers, and Antony's two brothers Senkol and Fernandes. These three were, in turn, the sons of a man who responded to the name Sevittiyan to those who could not get around to uttering his real name, Sebastian.

Recalls 80-year-old maestro Murthy: "I had met Sevittiyan as a nine-year-old. He made mridangams for Narayanasamiappa who introduced the instrument to the concert platform during the regime of the Maratha kings in 19th century Thanjavur." Sevittiyan carried the mantle from his father Adaikkalam, who must have crafted the instrument for mridangists who accompanied Thyagaraja. We are also talking about a family that must have been one of the first Dalit converts to Christianity in 18th century Tamil Nadu.

The present generation has no memory of when the conversion could have happened. But surely, if the 'Paraiyar' ancestors of today's drum-makers had hoped to overcome the stigma of untouchability by embracing Christianity, their hope has been belied. Even the shifting to Madras in the '60s did not offer the anonymity that urbanity usually brings with it, since dealing with untreated leather, especially cowhide, continued to invite social opprobrium. Says Aruldas alias Raju (most of the mridangam-makers are given new 'Hindu names' by the artists they are associated with), the first to move to the city with his father Setty: "It was most difficult even to rent a house. People would turn us away because we handled animal hides."

The hides of three animals go into the making of a mridangam: goat, buffalo and cow. Buffalo skin is used to make the ropes (vaar) that run along the hollow jack-wood frame and also for the thoppi (cap) on the left head that provides the bass effect. The thoppi has two overlapping layers of buffalo skin with a layer of goatskin in the middle.The right head, valanthalai (see pix), is made of three concentric layers of skin. Moving inwards, first we have meetu thol, made of cowhide. Next, the mostly invisible chapu thol, made of goatskin. At the centre is a black circle (soru), made of a mixture of iron ore and manganese laced with rice starch, for tonal variations. In a scientific paper C.V. Raman wrote on Indian percussion instruments in 1922, he pointed out that while the drums the world over produced "inharmonic overtones" (that is, mere sound), "the mridangam forms an exception to the rule and gives rise to harmonic or musical overtones in the same manner as a stringed instrument." A bow to the faceless artisans of the Thanjavur parampara.

The irony is that Brahmins, who are most touchy about the cow's perceived divinity, have to necessarily run their fingers on a slaughtered cow's hide to produce music. When asked if they would oppose the proposed ban on artistic grounds, top mridangam players Outlook spoke to—Murthy, Sivaraman, Karaikudi Mani and TVG—dodged the question. While Murthy and Mani admitted that without cowhide there would be no mridangam, Sivaraman talked of importing synthetic parchment and TVG suggested importing cowhide. Aruldas, Yesudas, Johnson and their next generation—Lawrence, Martin and Arokkiyam—are shocked that the exponents of the art refuse to accept the fact that the making of a mridangam involves the killing of a cow in its prime. Mani, a finicky player whose mridangam needs to be serviced (for Rs 1,500) after every concert, insists: "Only those cows are killed that are old and are of no use." Adds Sivaraman: "Cows are not killed to make mridangams. They are slaughtered anyway and we merely use the hide."

Thiruvarur's Rajamanikkam, at 70 the oldest surviving flag-bearer of the Thanjavur tradition and nephew of the legendary Setty, scoffs at these views. "Have these people ever been to a slaughterhouse to see what we do? We examine cows and choose the healthy ones that have good, lustrous, soft skin. The cow should have given birth at least a couple of times but shouldn't be too old. We pay Rs 1,500 for the hide of one such cow." The mridangam craftsmen point out that they would never buy cowhide from Chennai's slaughterhouses "since cows here live on newsprint and other waste". They make regular trips to Thanjavur to buy the hide of well-nourished cows. Only goat and buffalo skins are procured in Chennai. 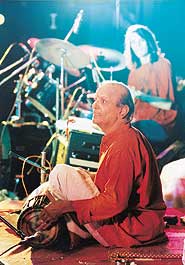 Says Yesudas, who has been exclusively making mridangams for Mani: "If the ban does come into force, we will defy it and use cowhide come what may." Unwittingly admitting that he would even do something illegal to procure a drum, mridangist Mani says, "Despite the ban on the use of pangolin skin, the kanjira (tambourine) is still available but at a premium. Similarly, we might have to shell out more for mridangams." However, Umayalpuram Sivaraman wants to change with the times: "Today doctors fit synthetic valves to the heart.Similarly, we will find a substitute for cowhide."

Irrespective of whether a cow-slaughter ban is effected, the mridangam-makers expect a little more respect from the players. And from society. "We deserve to be treated better than the cows," says Rajamanikkam.