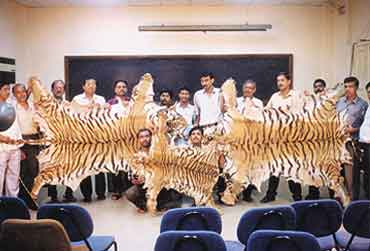 At a time when Project Tiger's online census data is de-activated, two hefty hauls in Delhi, on January 31 and April 6, reveal a new criminal demand for tiger and leopard skins. Both hauls largely consisted of skins. Many were signed in Tibetan. Unlike before, few had bullet marks. All are signs of a heinous trans-Himalayan trend, a striped trail that leads from India to China. New evidence shows that Tibet's traditional tiger and leopard trim overcoats are fashionably in, selling openly in Lhasa's bustling Jokhang Square. In mainland China, death decor is in too, in the mansions of the fiendishly rich, where tiger and leopard skins are splayed out on floors and settees. Undamaged by bullet holes that mar natural stripes and spots. Flaunted for their flawless cut-throat worth, flatly symbolising China's affluent tiger economy status.

India's great cats are Asia's new fashion victims. Slitting open the eyes of the world to this spiralling tiger and leopard skin trafficking, in October 2004, London-based campaigners of the Environmental Investigation Agency (EIA) made public their report and video: The Tiger Skin Trail. This 15-minute film contains chilling footage of the world's largest ever skin seizure, made on October 6, 2003. Where Chinese customs officials in Lhasa recovered 31 tiger, 581 leopard and 778 otter skins (used for snow and sleet-proof overcoats). The source of origin? Undoubtedly India. Proven by Hrithik Roshan's smiling face on a Delhi newspaper used as wrapping. This haul alone, then worth $1.2 million, represented the erasure of 1 per cent of India's wild tigers.