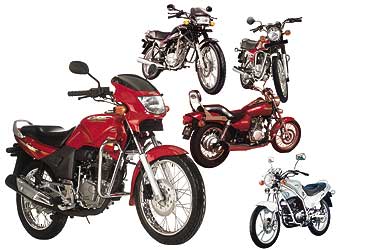 outlookindia.com
-0001-11-30T00:00:00+0553
The old favourite is fading. Last month, when motorcycle maker Hero Honda dethroned Bajaj Auto from its traditional numero uno status in the Indian two-wheeler market, it confirmed that the great Indian middle-class vehicle—the scooter—had hit a dead-end, giving way to its more swanky, stylish and fuel-efficient sibling, the motorcycle. Admits R.L. Ravichandran, vice-president (business development and marketing), Bajaj Auto: "In the last four years, there has been a rather rapid shift towards motorcycles."

Indeed. The numbers are stunning. Between 1998-99 and April-July 2001, scooter marketshare has fallen from 35 per cent to a lowly 16, while that of motorcycles has soared from 33 to 61 per cent. In absolute numbers, scooter sales have fallen 28 per cent from 12.54 lakh in 1999-2000 to 9.02 lakh in 2000-01. Geared scooters have taken the maximum beating, down more than 50 per cent, from 13 lakh a year just four years ago to about 6 lakh now. At the receiving end are Bajaj Auto and lml, whose bread and butter have been geared scooters. Of course, Bajaj has grown impressively in motorcycles (21 per cent marketshare in 2000-01).

Between April and July 2001, Hero Honda sold a record 4.10 lakh motorcycles while Bajaj Auto clocked cumulative sales of 3.75 lakh scooters, motorcycles and mopeds. Hero Honda took a lead of about 3,000 units in April. The lead rose to 5,000 in May and in June was a decisive 21,000. Says Hero Honda chairman Brijmohan Lall Munjal: "My background is in bicycles where the customer wants a trouble-free, smooth, maintenance-free and economical ride year after year. I applied the same philosophy in motorcycles. We realised early that economy in terms of price and fuel efficiency would be key for success."

Ravichandran agrees the new four-stroke motorcycles, 30-40 per cent more fuel-efficient than scooters, are a big reason for the consumers' shift away from scooters. Also, the semi-urban and rural markets have grown substantially and created a huge demand for motorcycles which, with a larger wheelbase, are ideally suited for the terrain, he says. "Plus, higher urban incomes led to the purchase of the first vehicle at a younger age when macho images rather than utility dominate the psyche of the consumer." Yes, image has been a problem. Says a market analyst: "The scooter was being perceived as a dowdy vehicle. There was no excitement in the segment either. Only in the last two years have we seen new models hitting the market."

Growth is feeble, if one looks at the total two-wheeler market but bikes are doing fine. Says Munjal: "Even in this depressed market, we expect the motorcycle segment to grow by 15-18 per cent. Within Hero Honda, we expect to do a little better than that. We have finalised our models till 2005." Among other manufacturers, tvs has put up a third plant while Bajaj Auto has invested in its fourth plant to step up production.

So is it time to give the scooter a ceremonial burial? Not yet, says Munjal: "Scooters will not die out. The scooter is still used as the primary transportation vehicle by many families. And with rural populations shifting to bigger cities, the demand for scooters will revive sooner or later." Says Pankaj Gupta, director, Society of Indian Automobile Manufacturers: "Even today, the scooter continues to be a reliable and cheaper option for many (it is still a good Rs 10,000-12,000 cheaper). When the economy gets going, scooters will make a comeback."

Also, the sector may have got a fresh lease of life through gearless scooters which, analysts believe, have a lot of potential. Says Sulajja Firodia Motwani, joint managing director of the Rs 1,200-crore Kinetic Engineering, leader in the gearless scooter market, "Over the last decade or so, the geared scooter has remained more or less the same in terms of styling and technology. That's the reason for its drastic fall. Against this, the modern automatic scooters have come like a breath of fresh air. It's almost a replay of what happened in the passenger car segment." Ravichandran does not agree. "While the scooter segment will get split into scooterettes, ungeared and geared scooters," he says, "the geared ones will continue to be of relevance in providing fuel-efficient scootering." Motwani, whose company has also joined the motorcycle bandwagon in collaboration with South Korea's Hyosung, says: "Modern gearless scooters have all the features motorcycles offer. This market will develop steadily."

Interestingly, Kinetic's erstwhile partner Honda has recently launched its up-segment scooter Activa. But a Rs 30,000-plus scooter? Honda points out that despite the overall scooter market shrinking, automatic scooters have grown by almost 20 per cent in 2000-2001. "And with Activa, we hope to energise and drive the growth further," says a Honda spokesperson.

So what's the prognosis on scooters? Once, when author Somerset Maugham was admitted to hospital, a friend called up to ask what he should bring when he came visiting: fruits or flowers. "It's too late for fruits," replied Maugham, "and too early for flowers." The situation may be the same with the trusty old Chunnu Munnu de papa di gaddi.

In Indore, a desecrated church is rebuilt by the real bhakts