Some old wine in new bottle, and development more than dole 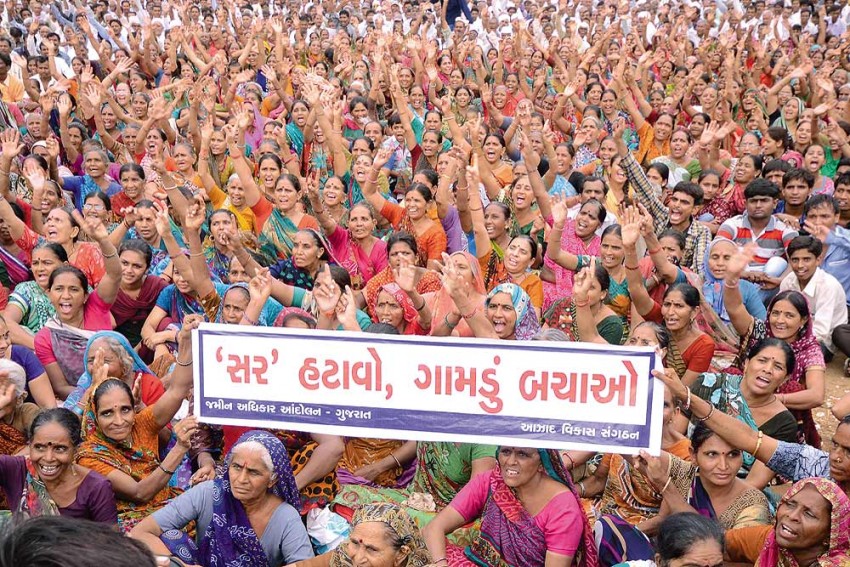 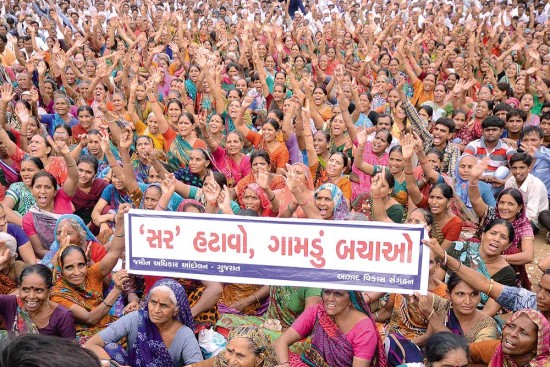 Finally, the BJP’s prime ministerial candidate has given India a sense of his economic vision for the country. Apart from the much-publicised Gujarat model of development—basically, a ‘strong’ administration topped with dollops of PR and a pronounced pro-corporate tilt—Modi had thus far shied away from speaking out on macro-economic policy and other pressing, allied issues. His views matter, of course, because the economy has assumed centrestage as a crucial election issue for 2014. Sensing this, political parties have been busy pump-priming voter expectations—from promising to ‘fight’ inflation; ‘reform’ taxes; give ‘free’ water; increase the number of subsidised lpg cylinders.

Narendra Modi’s first vision statement—a 90-minute-long speech laced with patriotic sentiment and anodyne play of words like ‘No bills, only political will’ and ‘Five Ts for brand India’—at the BJP national council meet in Delhi was thus closely watched. Did it justify the faith many Indian and foreign investors are reposing in Modi to put India back on the path of reforms and more rapid growth?

Well, the vision statement had all the ‘right’ emphasis on specialised training and quality education for employment generation; infrastructure; on using our mineral resources for local value addition to boost rural development and, of course, wealth creation through Brand India. “By touching all the right buttons, including by talking of res­pecting all religions, Modi seems to be preparing for power,” says S.L. Rao, former director general of NCAER.

WYSIWYWG: What You See Is What You Won’t Get

One doesn’t expect Modi to profess his views on each and every economic issue, but some big debates were conspicuous by their absence. For instance, the vision statement lacked detail on BJP’s tax reform agenda (perhaps that was deliberate given all the criticism for its plan to introduce a banking transaction tax). It also did not fully capture the party’s stance on foreign investment, something that will be closely watched given parent body rss’s known views against overt foreign control on the economy. The contentious issue of lab­our reforms was also given a go-by.

On one front at least, Modi stressed the promise of clear change from the past: a plan to move away from ‘dole politics’ to focus on ‘development and delivery’. Does this mean we will see fewer welfare schemes in the future? That is unclear, since the BJP is not averse to doles or subsidies. Chhattis­garh CM Raman Singh said (post-victory in the recent assembly elections) that his first priority will be to implement his pro-poor schemes. Similarly, Madhya Pradesh’s Shivraj Singh Chou­han, another BJP victor, added new ones to his ‘ladli’ kind of schemes.

“The problem is not with a lack of vision. The challenge instead is how to convert the knowhow to do-how.”
M.S. Swaminathanm, Agro-scientist

In fact, many of Modi’s ideas—like managing inflation through a national agriculture market or a price stabilisation fund—seem simplistic. The fund (already in existence for plantation crops like rubber, coffee and so on) may protect the farmers, but it will not make up for shortcomings in agri produce supply management, which include the lack of enough modern silos, says agro-scientist M.S. Swaminathan. Yet, “while not agreeing to all his policies”, Swaminathan acknowledges agriculture is one area where Gujarat had done well. In the last decade, Gujarat has registered around 9 per cent average agriculture growth partly due to the expansion of irrigated area with the availability of Narmada water and new cotton varieties.

Many, including UPA spokespersons and ministers, have claimed that Modi has merely lifted their ideas as he is ber­eft of any of his own. Do these reflect poorly on Modi—or speak of his shrewdness in recognising the merit of the ideas? Over the decades of Congress-led governance, there has been no dearth of good ideas—from devolution of power to panchayats; extending irrigation; pushing for quality education; focusing on preventive healthcare and skill development; or using technology to improve delivery of goods and services. Many of these ideas are now part of Modi’s vision. The roadmap, of course, is awaited.

While clarifying as not being Modi supporters, some of the experts who spoke to Outlook felt there is nothing wrong in bringing to focus proposals already under implementation; it sugg­ested continuity and the desire to take things further. For example, everyone agrees that broadband, a gas grid or even the water grid are vital for better resou­rce management. The national broadband network, a project to connect 2,50,000 villages in India, is already under way, though running two years behind schedule.

“Even though broadband is an old idea, bringing it into the agenda would probably ensure that it would move forward,” says Kiran Karnik, member, National Innovation Council. “These are some of the things the UPA government did but neither took credit for nor pushed forward.”

However, continuity is not desired for all ideas. For example, India already has 15 iits and 17 iims. So, Modi’s proposal to fur­ther dil­ute the brand of educational institutes has been met with cri­ti­cism. The challenge, as with all levels of edu­ca­tion, is to get proper faculty and teachers in schools so that children are better prepared for the job market and are encouraged to pursue higher studies.

What does work in Modi’s favour is that he is not averse to experimenting. The success of the BRT corridor in Ahmedabad is in stark contrast to the disaster it is in New Delhi. Under his wings, GIFT, a greenfield ‘smart city’, is coming up in Gandhinagar as a hub for the global finance services industry. At the same time, his plan for ‘100 smart cities’ has invited questions. Former urban development secretary M. Ramachandran wonders where the land and funds will come from. Will it mean sacrificing fertile agriculture land?

“In a sense, what Modi has tried to do is to correct the imbalance or perception of being only pro-corporate.”
A.K. Shiva Kumar, Member, NAC

Modi’s track record of putting industry’s interest ahead of farmers’ in Gujarat is well known too (see box on Vapi, Gujarat’s industrial city).

Ahead of planning new cities, Rama­chandran stresses the need for framing a larger urbanisation strategy for the country that will also address the multitude of issues plaguing existing cities. The push towards urb­anisation and builder lobbies will also fuel the perception that Modi is pro-big business. “The same super-rich and corporates who lionised Man­mohan Singh in 2009 are now behind Naren­dra Modi, the new iron man,” obs­erves CPI(M) leader Nilotpal Basu.

In fact, by talking of socio-economic issues, Modi has been careful not to play up his pro-corporate image. A.K. Shiva Kumar, a member of the UPA’s National Advisory Cou­ncil, takes heart from the fact that Modi has not harped too much on industry and investment and “in a nice dep­arture focused on other issues of dee­per concern to millions of poor and middle class. In a sense, what he has tried to do is to correct the imbalance or perception of being only pro-corporate”.

However, as has been reported in the past, critics feel Modi is merely playing with words. Be it education or healthcare or gender issues, the Gujarat human development index is pathetic compared to its economic growth. “In Gujarat, governance is good only for the corporates,” says Indira Hirway, director of the Ahmedabad-based Centre for Development Alternatives. “There is no focus on socio-economic infrastructure for the masses, which has taken a backseat.” Modi may have expressed concern for jal, zameen and jungle, but the environment stands neglected in Gujarat, particularly the coastal resources, while farmers and tribals are known to take a hit when corporate interests clash.

Similarly, by harking back to so many of the earlier NDA projects, Modi is trying to import some sheen from the Vajpayee era. “There were several positive steps that the NDA government from 1999-2004 took, which have had a hugely beneficial impact over the years,” says Shailesh Pathak, president, Srei Infrastructure Finance Ltd. He lists the rural roads scheme started in 2000, telecom reforms, the Golden Quadrilateral highway projects, the paving of way for low-cost airlines, upgradation of airports, enactment of the landmark Electricity Act, 2003.

But Modi may not achieve what Vajpayee did given his reputation of taking most decisions unilaterally. He has promised a change in his style of functioning, though, with a proposal for setting up a committee of central ministers and CMs and a similar panel of bureaucrats for consensus-building on issues and projects of national imp­ortance. This too is being met with scepticism, in the light of Modi’s adversarial role in Centre-state relations, most prominently in opposing gst.

But then, the game of politics and business is about perception. Modi seems to be gaining ground, not necessarily because he has proved to be the best administrator at the state level (the ghettos in Gujarat are a sad reality check) but because the competition in the fray seems weaker in comparison. So as far as rainbows go, Modi’s vision for India is a picture-perfect one. The devil is in the detail, which is missing so far. Equally important is the implementation. For now, this is a broad-stroke, please-all vision to push his ambition to become India’s prime minister.